Five Blocks From the Top

Well, it didn’t happen. I didn’t get to fire up the engine today. Too many things were working against me, but in the big picture, I’m another day closer! It certainly not as monumental of a task, but I can imagine how the Egyptians felt five huge blocks of stone away from the top of a Pyramid! 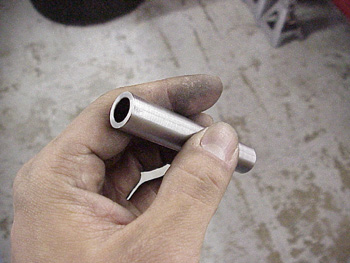 I had my friend Dave machine a spacer out of steel this week for the alternator bracket. After searching in François’ junk drawer, I couldn’t fine a suitable spacer that had the wall thickness to get the job done, so I took some measurements, and had one made. This sleeve will be tightened down by a bolt, and press against the slot in the bracket I made last week. I cut it down to length after I bolted everything together.

The one thing that took forever today was getting the right V-belt to fit. After everything was in place, and lined up, I took a piece of string and ran it inside the three pulleys that would need to be connected. The total length of this string was taken down to my local NAPA store, and I got three belts that were close in size and required width. On my return, I found I was way off! Looking at where I screwed up, I found that the string had stretched a bit while I was getting it on the pulleys. Using a piece of wire, I was certain I would be right on my second trip. WRONG! I was getting close, but it was still off. Taking another hour to make the round trip to the auto parts store, I tried for the third time. I was starting to doubt my measurements, so I decided to err on the long side just to make sure it would fit on the engine. It was late in the afternoon when I finally returned, and I found my shortest belt to fit, but the tension was not to my liking. François confirmed that it was too loose, and that it not only would it squeal away once the engine started, but it would also burn up from the friction. I think 1/4 inch shorter, and it will be perfect. 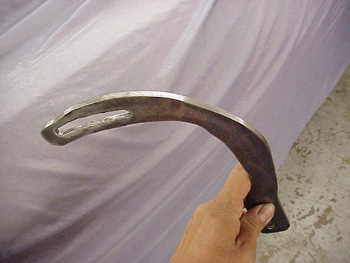 Saving my embarrassment of returning to the auto parts store for the fourth time in one day, I decided to get the belt exchanged next week. It was too late to attempt starting the car today anyway, and I needed a break from all the driving! I decided to try and clean up the bracket I made for the alternator. It works fine, but has a real hand-made look to it. I filed down the rough edges, and sanded down the grind marks. With some paint, it should look more like an alternator bracket, than a primitive boomerang!

As I said last week, I’m taking next Friday off from the car, but I hope to get a chance to work on it one more time this month. With any luck, and persistence, I’ll get to share the start of an engine that has been dormant for 26 years!