It Starts When it Starts….Just not this Week!

Ugh! I have a couple of days off this week, but François doesn’t have the time to help me get my Ferrari started!!! The Ferrari show season has begun, and the Greenwich, Connecticut Concours D’elegance is this weekend. François has a few customers who have cars that will be showing, and the last minute details have him running all over town!  Along with the show cars, he also has regular customers who need repairs on their Ferraris as well, so you can imagine how busy it can get. I’m lucky to have François’ expertise, so waiting another week, or so, will have to be! I apologize to everyone who’s anxious to hear it run, but I’ll try to find things to entertain you and myself in the interim! 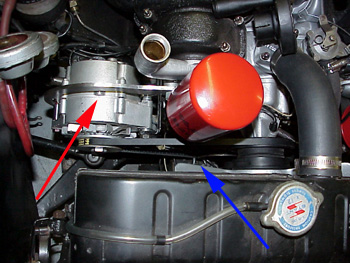 I stopped by the NAPA Auto parts Store again to exchange the belts that didn’t work out last week. I bought two more belts home knowing that one of them would be a perfect fit. I chose the one that gave me plenty of room for adjustment so if the belt stretched, I would still have room on my adjuster (red arrow) for more tension.

With the belt in place, I found a clearance issue with some brake lines coming out out the proportioning valve mounted way down below the bottom pulley. (blue arrow) With some careful bending, the v-belt now clears all the brake lines. 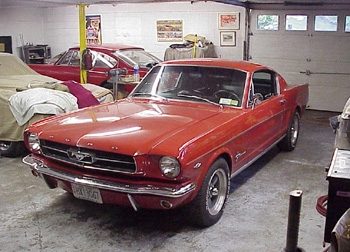 Without much to do on the Ferrari, I decided to get some work done on my Mustang. I’ve been using it for the last couple of weeks, which included a nice long drive to my friend’s house for the long holiday weekend. With old cars, whenever you drive them, little problems arise, and I here’s a list of things needed to do.

First off, the car ran great, and never missed a beat in the two weeks I used it. I’m really proud of her. I hope I never have to sell her!

Last night when I was leaving Long Island on my way back to New York City, I turned on my headlights and hoped they worked. Lights on an old car are the same as windshield wipers, you never use them, and when you need them, they usually don’t work! Since I had just past a DMV inspection, I didn’t think there would be a problem. I was wrong.  My right headlight was out, and on closer inspection, was cracked from a pea sized hole, probably from a rock. It was early enough to stop by a K-mart to see if they had a light, but no such luck. It seems sealed hi-lo beams are no longer stocked by anyone. I even checked all the gas station/conveinence stores on the two hour drive back to Manhattan. I bought one today at the auto parts store.

My broken headlight reaffirmed my reasons for using regular headlights for normal driving. If  had been driving my Ferrari, and I decided to use the Marchal lights, it would have cost far more than the $6.00 bucks I just spent!

For the rest of the “to-do” list, the squealing front tire was a brake pad, and the clutch pedal was remedied with a glob of grease. Luckily it wasn’t a worn pedal cluster! The fender/tire issue is a new one. I’ve stuffed some pretty wide tires in my car, but I never knew there was a clearance issue until I drove the car on the rough roads in NYC! The roads combined with previous bodywork that left an excessive inner fender lip, caused the rear tires to rub against the fender. Rolling the inner lip on one side seemed to solve the problem but a more drastic measure was needed for the right side. I decided to cut the excess off the inner lip, and grind what was left to a smooth surface. After a few minutes, I had the work done. Now all I need to do is take a few of my friends for a ride on some New York roads for the true test!

I really don’t know when I’ll be starting my Ferrari, but you’ll be the first to know! I’m trying my best to be patient, but I’m as anxious as you! Talk to you guys next time!