I didn’t make it to the shop today because I had to put some time in at work, but I took this opportunity to finally title and register the Ferrari! It’s something I did not look forward to because dealing with the Department of Motor Vehicles was never a brief affair, but big changes were supposedly made in expediting the process, so I was hopeful for a short visit.

The whole process started a few weeks ago after I started the Ferrari for the first time. I was almost caught by surprise in finding my car so close to being put on the road! The first step was to secure an insurance policy. I currently use American Collectors Insurance for two of my other cars, and decided to add the Ferrari to this policy. I sent the pertinent information along with some pictures of the car so they could send me the insurance card I would need for the Department of Motor Vehicles (DMV). They work on an “Agreed Value” for the car, so I had to prove that my car is worth the amount I wanted to insure it for. They did not want an appraisal because they felt that appraisals are usually inflated, but advertisements of similar cars for sale could be used to back my claim of value. Since there were only 50 330 Americas built, I am very lucky to have Michael Sheehan selling one on his website. I forwarded his URL, and faxed ads from Ferrari Market Letter for GTEs and 330GT 2+2s. After a few more phone calls and faxes, I got my insurance card in the mail. If I were just insuring the Ferrari, the bill would have less than $300 bucks a year! There are limitations to this policy, but they fit perfectly with the use of my car.

The Insurance card arrived this morning, so everything was on schedule. I made it down to the DMV office at about 3pm, and got in line. I downloaded many of the forms ahead of time, so I was ready with my forms filled out. When my number was called out, I had been waiting only about an hour.

As the girl was entering the information into the computer, she exclaimed, “What?…12 cylinders?…That can’t be right.” I confirmed this, but was surprised she doubted it. Thinking off the top of my head, I could think of a BMW 850 and a Mercedes S600, all with 12 cylinders, not to mention Ferrari 456s, and 550s that currently sport the same number of cylinders. Whatever she was thinking, she learned something new today! 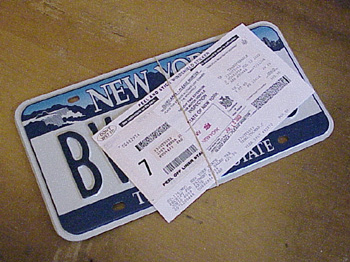 After a little over an hour, I walked out of the DMV office with a new set of license plates under my arm. It’s official, I now have documentation that proves I own a Ferrari 330 America, SN 5053! With these plates, I can also put them on the Ferrari, and take her out for a spin! There’s still a ton of things I need to do, but the plates are there waiting to be mounted. Another milestone passed!