The Anticipation is Killing Me!

Another week has gone by, and yet still no first drive. Believe me, I’m more disappointed than you! We’ve run into a snag with the windshield. François tried installing with glass this week, and… 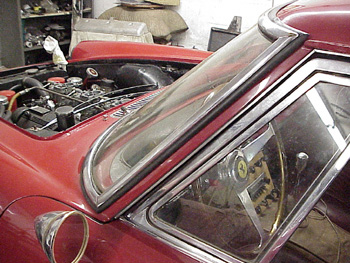 …as one side seems to fit fine… 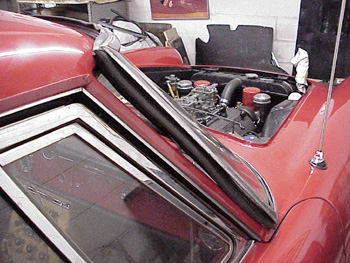 …the other side goes horribly wrong! He has a couple more tricks to try, so I’ve got my fingers crossed!

Unfortunately, this eliminated any possibility of my driving the car for the first time today! I considered driving the car without front glass for a short trip, but decided it wasn’t worth explaining the situation to the police if I got pulled over. (You see Officer, I have the glass, but it doesn’t really fit right now, so I decided to drive the car anyway…oh, the hood? Well, I have that too, but I didn’t mount that either… ) I just had exercise some more patience! 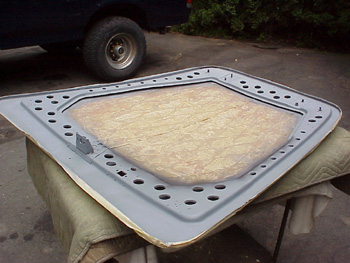 The positive side to not driving the car today was that there was no reason to rush the painting of the underside of the hood. I carefully sanded the the sections I wanted to paint black and wiped everything down with lacquer thinner. This picture shows the hood with its coat of primer ready for its first coat of black paint. By the end of the day, I had the underside painted with three coats of hi-temp black paint so next time I can start reinstalling the hardware. 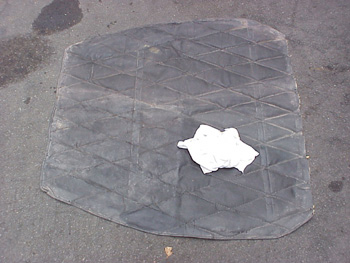 Keeping with the theme of the hood, I unpacked the hoodpad that was once glued to the underside of the hood. At first glance, this piece was a dirty, greasy vinyl pad with a deteriorated fiberglass insulation that should all go in the trash, but François looked at it, and claimed it not to be in such bad shape! 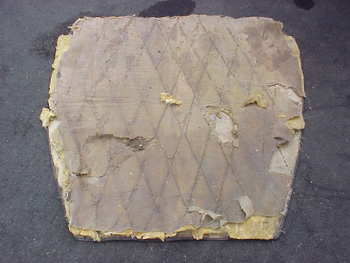 I had my doubts because it really looked bad, but François instructed me to rip out the insulation, and rotted backing cloth. 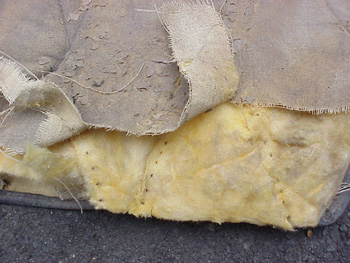 The backing cloth was pretty gone, and tore out from the stitching pretty easily. The threads were all rotted too, so everything came apart very quickly. François told me that Frank, our upholsterer, could easily sew in new insulation, and backing, but finding the correct vinyl could be difficult, so saving it would be wise. 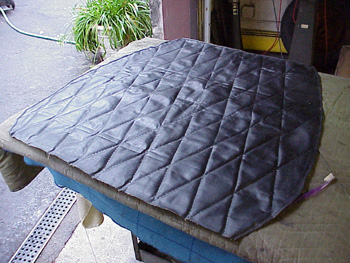 Using acetone, first applied with a cloth, and then with a toothbrush, the dirt began to come off. There was a lot of grease and dirt imbedded in the grain of the vinyl, so a lot of careful scrubbing was involved. At the end of the day, the pad really started to look good! When I’m done removing all the dirt, I’ll treat the pad with a vinyl treatment, and I’m sure it’ll look great.