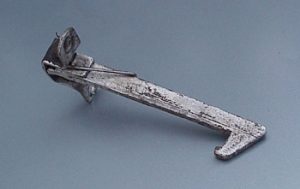 I stopped by Jerry Curtis’ shop today and got a hood catch for my car. Francois insists that my original one is somewhere in my possesion, but I have yet to locate it in my pile of spare parts. I decided to buy this one from Jerry, and it mine turns up, I’ll sell this one, or something.

It had a lot of black over spray on it, so I tried to remove as much of it as possible without removing too much of the original nickel plating. Francois claims that the missing one was nickel plated already, so I’m not going to plate this one if mine turns up in the next few months!

True to Ferrari, this hood catch did not just bolt right in! It is the same hood catch found on most Ferraris of that era, but when I went to bolt it to the hood, I found the spacing for the machine screws further apart on my car than that on the latch! I broke out a round file and began widening the hole. Eventually, it fit fine, and the hood now has a saftey catch. 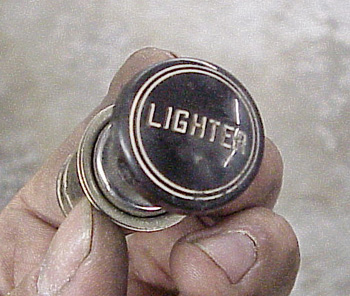 While I was poking around Curtis’ shop, I found this lighter in a box of parts. I’m missing my lighter, and was looking for an inexpensive replacement. The profile of this knob is similar to the vent knobs and accessory switches found on my car. I’m thinking about chucking this plastic knob in the lathe, and sanding off the lettering, and polishing it to a plain black surface. Before I do this however, I want to know if anyone recognizes what this might have come off of? It would be ashame to destroy this knob for the Ferrari if it actually went to a Jaguar, or Healy. Anyone have any thoughts? Answer on the message board where I pose the same question.