That Ain’t No Volvo! 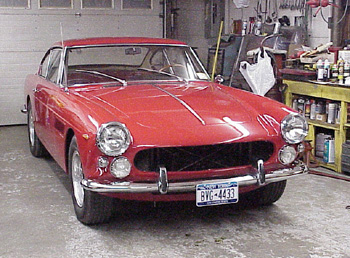 So I stop in at a gas station to fill up the thirsty Ferrari, and I chat with the attendant. He’s impressed with the car, and I tell him how long it has taken me to get this far. A woman enters the office, and overhears us talking. She exclaims, “That’s a real nice car! What is it, a Volvo?” I wasn’t nearly as offended as the kid at the gas station. “A VOLVO?!? Where’d that come from?!” He blurted out. I quietly slipped out before there was any “fist to cuffs!”

I’m not making it easy for people to figure out what kind of car I’m driving, but I kind of like the anonymity. None of the badges are on the car, and without the telltale grille she’s pretty hard to spot except for the true Ferrari fans.

I continued working on the overdrive. It’s beginning to drive me a little nuts. With the ignition on, and all the switches in the correct places, the solenoid works fine, but when I start the engine, and try to engage the solenoid, it doesn’t want to engage. There’s a safety circuit to keep the overdrive from engaging unless the car is in 4th gear, but with the clutch in , and the selector in 4th, I still can’t get the solenoid to click. Once I stop the engine, the solenoid still sticks, but after working the mechanism, it begins to work again. It just doesn’t seem to want to work when the car is driving! I found some overdrive experts on the web, so this week I’ll be contacting them.

Winter is fast approaching, so I put another 40 miles on the car. There’s a ton of stuff I want to get done before the first snowfall, but time is working against me. Here’s the plan:

The Windshield Wipers: From the picture, you can see they’re a little high. Something went wrong, and I haven’t been able to figure out what happened. They were working fine, then they stopped! Either I will address them soon, or François’ electrics specialist will have a look at it. I’ve been so busy with the overdrive, I haven’t had the time to look at the wiper motor!

Exhaust Hangers: I still need to make some brackets to weld up to the exhaust. Although the the pipes are secure, some of the tabs on the mufflers have no corresponding brackets, so once I make them up, I’ll have my welder weld them in place.

Seat Belts: Keep it between you and me, but I managed to pass the NY State safety inspection without seat belts! In NY State it’s a requirement, but easily overlooked! I want to install a set that will match the carpets, but I haven’t chosen the exact color yet, but now is the time to weld anchor points for the belts along with the exhaust hangers. I need to start collecting some hardware.

Interior: The upholsterer is just about ready to start work on my seats. Frank says the cushions are a crumbling mess, so they will have to be rebuilt from scratch. I want to go down to his shop to see how it’s done, and maybe do some work myself, but finding the time to do this is tough! If it’s a snowy winter, I’m sure I’ll be spending some time there!