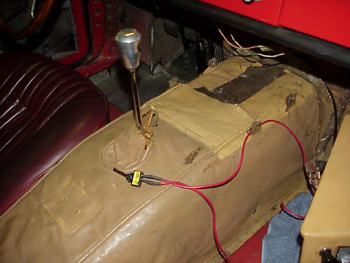 I had to find a way to figure out definitively if my overdrive problem was electrical, or hydraulic. The relay seemed to work fine when the transmission tunnel was off and the car was off, but something was keeping anything from working when I was driving the car. I decided to bypass the relay with a toggle switch that could send power to the the solenoid directly. I made up a temporary wiring harness that went from the battery to a toggle switch, to the solenoid, and even added an in-line fuse for some added protection. This circuit bypassed the safety switch that prevents the overdrive from being turned on when the car is not in 4th gear. From all the information I’ve been reading, you can ruin the overdrive if it is put in reverse and the overdrive is on. With the safety switches built into the transmission, it’s impossible to do this, but my harness could easily switch on without the protection of the safety. I made sure I labeled the toggle which position was off, and went for a test drive.

As soon as I got into 4th gear, I flicked the switch, and the overdrive engaged! It was such a relief! Rebuilding one of these units is pretty involved, and would definitely take my car off the road for several weeks. Now it was confirmed that the Lucas solenoid (surprise, surprise) was the culprit. I can easily replace the faulty relay with a $6.00 dollar relay from Radio Shack, but I would like to see if I can either fix what I have, or get a Lucas replacement. 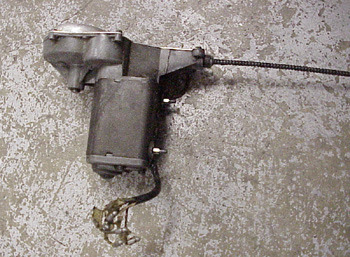 It’s like a bad dream, but my wiper motor had to come out of the car. François’ electrical guy took a look at my wipers, and concluded that it’s probably something wrong inside the motor. He says it’s pretty common with these Lucas units (are we seeing a pattern?). Although I took it apart to check for broken pieces, and corrosion, I didn’t replace the brushes because they looked fine. There may be a dead spot that I missed, so I’ll have him take a look at it. I would normally do it myself, but it may be a better choice to have an expert check it out to keep me from pulling this motor out again!