First off, Happy New Year everybody! I thought with the official end of the Holidays, I could return to work on my car, but the weather here in NY is not cooperating. It’s raining, sleeting, snowing, and pretty dreary out. In NYC where I live, when it’s a mix of rain and snow, it’s definitely snowing where the car is stored north of the city in CT. Driving up there just isn’t worth the risk of watching people do stupid things with their SUVs. (Just because you have four wheel drive does not make you immune to the laws of physics, YOU BONE HEAD!)

Instead getting down about the winter, I’m going to go back a couple of months, and tell you about a few hours I spent at Line Rock Race Track. Yale, a fellow Ferrari owner, signed up for his first “driver’s education” event with an organization that sponsors them at race tracks in the NYC area. Http://www.scda1.com/ has a “run what you brung” attitude that I really like. They are very professional, with keeping things safe a priority, but having a fun time as a close second. I promised I would come out to watch Yale take his 330GT 2+2 out on the track, so on November 8th, we met at Lime Rock in northwestern CT.

I can remember several years ago when I took a car on the track for the first time, and I couldn’t wait to see how it would be for Yale. I remember reaching a kind of “sensory overload” trying to absorb everything that was happening. Along with all the information you’re given from instruction, you’re also learning new things about the car you thought you knew so well. I love standing in the paddock looking into the eyes of the novices and seeing a mix of fear, confusion, and excitement.

All the Novice driver’s meetings seem to be the same. It’s stone silent in the initial meeting, with the instructor trying his best to explain the various flags, and track rules. The drivers are not really talking because they’re all trying to figure out if they’re grasping all the information as well as the guy next to them. They might all be novices, but testosterone is still high!

The second meeting is completely different after all the drivers have had their first run. The classroom is transformed from contemplative adults to a room full of giddy school boys (and girls). Everyone is sharing their experiences, and trying to figure out what they did wrong, or how they can get better. They all have been exposed to something they never thought could be so challenging, and fun.

Yale has been putting some serious mileage on his car since he bought it. He drives it whenever he can, and taking it to the track was the next logical step. I was excited for him, but also worried. There are always risks involved when you track a car, but with old Ferraris, the prices can skyrocket from a little mistake. Of course, mistakes can be kept to a minimum by being careful, and not trying to drive the car beyond one’s abilities, but it’s not so easy to do when you’re on the track! I know. I spun my 911 by trying to push my abilities!

Everything was going well throughout the morning, and he was learning about the car and the track, but as the old Ferrari came down front straight for another run, a little too much speed was carried into “Big Bend.” The car pirouetted off towards the inside of the turn collecting some of the infield grass, but luckily, nothing was broken, and Yale was able to get right back on the track. Unfortunately (or fortunately), I didn’t catch the “off- track excursion), but here’s a movie of the old girl at speed. (click on the picture) 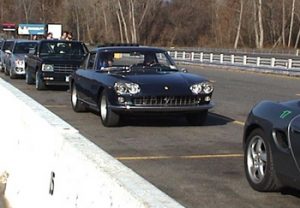