Last week’s posting from Mike at Doran Manufacturing promted a fellow Ferrari owner to send in his story about using Solidworks (the 3-D Computer Aided Design program used for my grille) to make a piece of obsolete rubber molding. I can’t wait to see the results! Here’s Deane’s story:

There are two complicated little z-shaped pieces of rubber that seal the top of the door jambs on 330GTS cars (I imagine the 275GTS and 365GTS use the same two parts, but I’m not sure). A friend’s car was missing these parts, and I thought I might be able to help.

These weatherstrip parts get mangled and twisted when they’re installed on the car and riveted in place, so the old pieces are useless as castable mold masters. Their shape is highly 3-dimensional, and curved in 3 axes, so it’s also difficult to make a master by gluing and sanding pieces of plastic.  Machining a metal tool to properly mold the parts would cost about $5000 if made in the US. 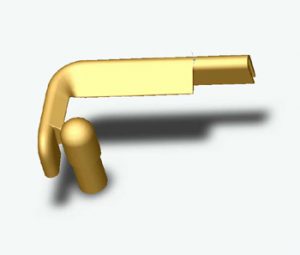 The mechanical engineers at my company frequently create solid models of their plastic parts on Solidworks (the same program used by the guys at Doran Manufacturing).  Then they test their CAD models for functionality and appearance by having prototype parts made by SLA (Stereo Lithographic Assembly).  This is a bit like printing a part in plastic, 3 dimensions. 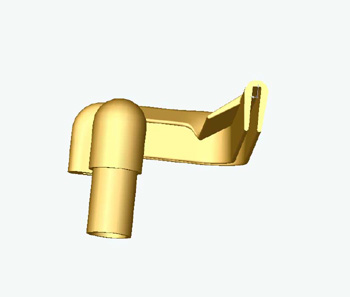 I borrowed a copy of Solidworks for a couple of weeks, and built a model of my part on my home PC.  It’s a great program, powerful but much easier to use than older 3D CAD software. You basically construct several planes in 3-space, “sketch” on the planes in 2D, then project the 2D sketches in 3-space by “extrude”, “cut”, or “sweep” commands, along linear paths or 2D or 3D curves which you construct between planes.  It’s amazing what you can do with high school geometry these days. 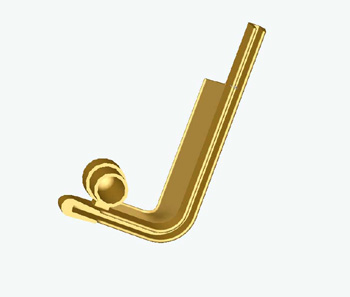 An SLA vendor will take your Solidworks file (or an IGES file created in Solidworks or other 3D program), and send it to an SLA machine which consists of an ultraviolet laser aimed down at a pool of liquid acrylic or epoxy on a motion table.  The focused laser beam hardens the liquid plastic where it contacts the pool.  The laser “draws” the part onto the pool, forming one thin layer at a time. After a layer is formed, the partially-formed part is lowered into ther pool, and the laser starts drawing the next higher layer.  Typically, the laser draws about 100-200 layers per inch.

When the SLA part is fully formed, it’s translucent and reasonably smooth.  A light sanding and spray paint can make a realistic-looking part for a product prototype.  But, SLA parts are not as strong as injection-molded plastic parts, so they may not be useful as one-off car parts.

In my case, the SLA parts were strong enough to make an accurate master for a cast rubber mold that would have been difficult or expensive to make through other processes.  The SLA service bureau made two parts from my file, normal and mirror image (left and right), for $150 each, overnight.

Mike Dunn of MadEnterprise has used these masters to make two cast silicone rubber molds.  We should have the first cast reproductions of the weatherstrip pieces soon if things go well.

This kind of stuff is very cool, and I hope with all this technology, it will be easier to remake obsolete parts. Thanks for the story Deane!