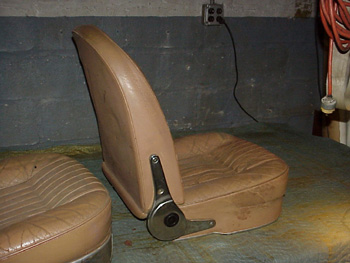 I finally got Frank at Eastcoast Auto Trim to allow me to come up and start on my upholstery! Frank is pretty busy with all sorts of projects from motorcycles to boats, along with re trimming auto interiors. I’ve seen his work, and it’s top notch, and François won’t use anyone else, but getting Frank to deliver on time is about the most impossible thing! I delivered my seats to Frank three years ago hoping without too much of a rush, he would eventually get started! Little did I know….

In his defense, he did complete the center console for the radio, and some rear trim panels, but I decided that since my car is basically done, it was time to push a little harder. For the last couple of months, I’ve been calling Frank, asking if I could come up and work on my seats. I even offered to work for him, to help finish up a project so he could get to my stuff. I figured 8 hours of my time, even sweeping up his shop, was worth getting one hour of his time on my seats. The idea was to get some momentum going. Finally, after months of bugging him, he submitted to my coming up and clearing up a work space to start on the seats! 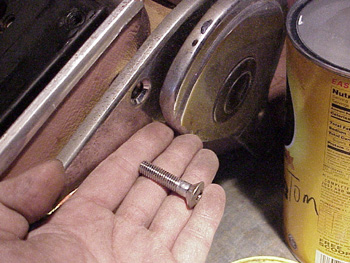 After I cleared a nice area to work on my upholstery, I began taking apart the front passenger seat. Frank wanted to keep one seat intact, so we could use it as reference, so I started unscrewing the large phillips head screws that hold the pivoting mechanism to the seat cushion and seat back. This picture was taken to remind me that the long screws are for the seat bottoms. 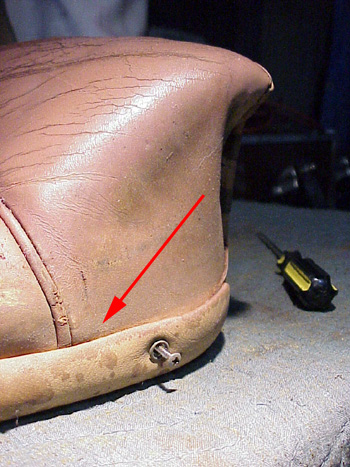 The leather on the seat back is held place by tacks nailed to a tack strip. This is hidden by this piece of trim. 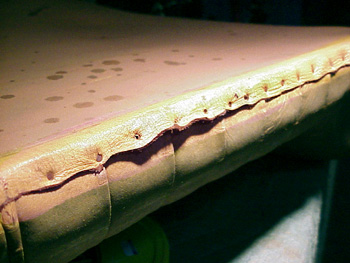 With the trim piece removed, the tacks are revealed. 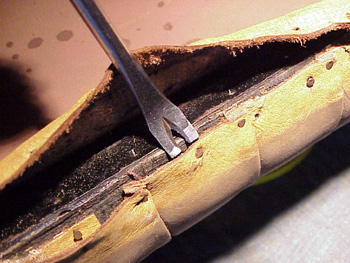 Looking over my shoulder to see my progress, Frank handed me this tool to make my job a little easier. It looked like it was made from an old screwdriver. Just like François, Frank has an assortment of tools that are specific to the job. This one made the tack removal a breeze!

You’ll also notice that these seats look two toned, as I take them apart. The covered parts represent the original color. Someone tried dying these seats in the past, and managed to dye them into a horrible tan color that reminds me of an old lady’s sensible shoes! 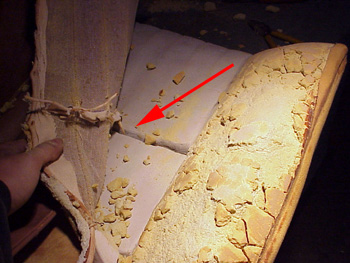 The seat back was hog ringed to wires that pull the cushion to shape. These features will be sewn into the new leather covers Frank will make. 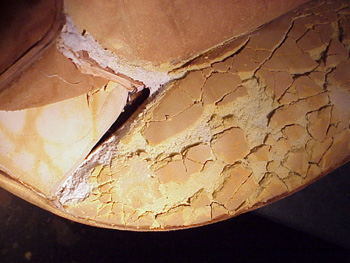 As you can see the outer shell of the foam is in pretty bad shape. It has a “freeze dried ice cream” texture to them (Smithsonian Air and Space Museum Gift Shop): hard and crumbly. 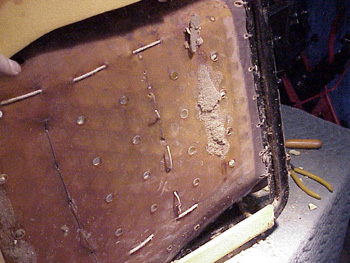 The support backing was made of the strangest material yet! It looks like a natural rubber sheet stretched across the frame of the seat. It held up pretty well, and Frank was glad, because finding a replacement could be difficult. 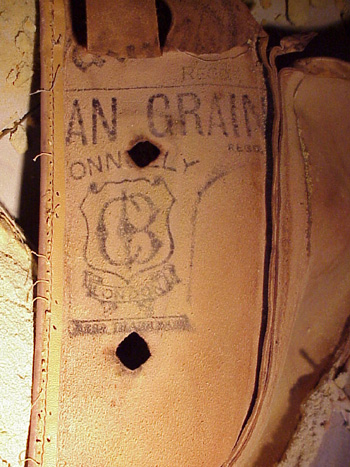 This Connolly stamp was found on the back of one of the seat covers. 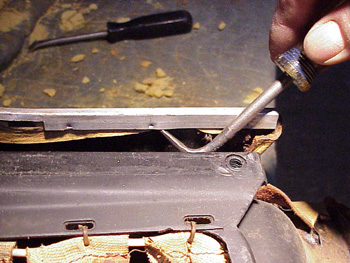 Moving onto the seat bottoms, I first had to remove this thin trim strip that runs along the bottom of my seats. Again, Frank had the perfect tool for the job. 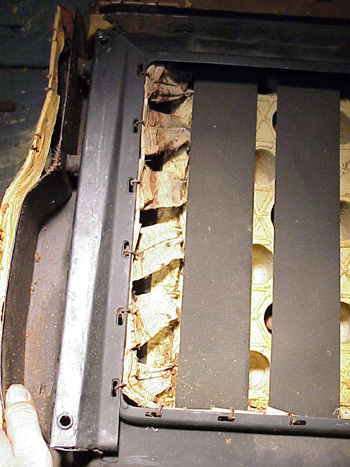 The seat bottoms get their shape from these cloth straps (light yellow), and come through the cushion to tie into the seat frame. The black rubber straps support the foam cushions and give little more elasticity to the whole assembly. Frank replaces these straps with new ones. 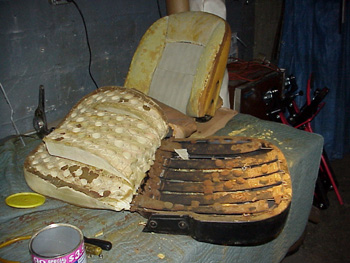 Once the hog rings were removed, the leather cover came off, and the foam was flopped over to see if the frame was O.K. Weird balls of foam were found on the bottom which I assume came out of the holes molded into the cushion. There seems to be three types of foam used to make up a Ferrari seat. Frank will replace some of it with modern materials that should last a little longer, and give better support. We’re also going to modify the seats slightly to offer some more lumbar support, but just don’t tell the Concours Judges!