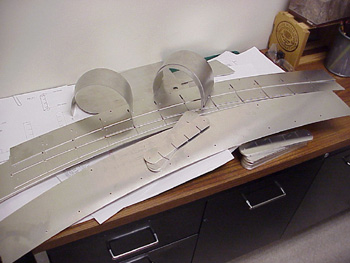 I stopped by Doran to see how Mike and Joe were doing with reverse engineering the grille. Mike kept apologizing about taking so long, but I had to remind him that I started this project over three years ago, so what they’ve done in a few weeks is incredible! Looking at the parts laid out in Mike’s office, I can see a grille emerging!

Joe has spent a lot of time precisely measuring and examining each piece of this grille, and it showed in the minute details he had on all the parts. It was kind of scary how he could rattle off the differing lengths and degrees of bends off the top of his head. I just hope he doesn’t dream about it like I have! 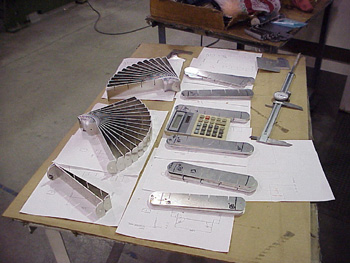 In the shop the technicians were bending some of the vertical pieces. As mentioned before, all the vertical pieces differ slightly in length, orientation, and amount of bend in the ends, so keeping track of which piece gets bent which way, and how much is something to  always keep in mind. Mike and Joe created CAD drawings that were printed out on sheets of paper for the tech to follow. Simply measuring the length of a part tells him which one he has, and which way it should be bent. 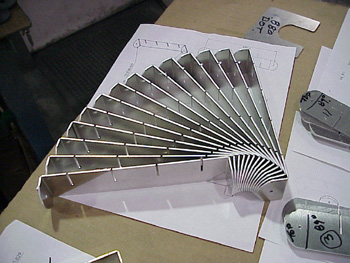 Templates were even made (upper right hand corner of the picture) to help check the parts quickly.

I’m constantly amazed at the accuracy these guys are working with, but I guess that’s why they do this kind of stuff for a living! I’m sure Enzo Ferrari, or Pinin Farina, would certainly approve of the care and attention to detail these guys are taking to replicate something that was made over 40 years ago! I can’t wait to see more progress. Go Mile, and Joe! 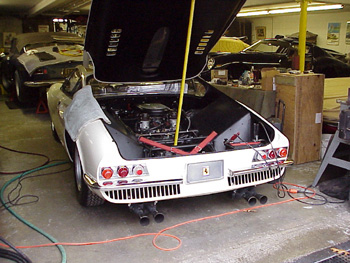 Stopping by François’ shop, I was greeted by the sight of this car parked inside the door. It wasn’t readily recognizable, and I did not have the benefit of asking François because he was out running some errands. Playing detective, I made some observations to narrow down what it was. It was like playing “Antiques Roadshow” with a car.
Clue 1: Definitely Pininfarina because of the Dino look, even similar, if not borrowed, tail lights from a 365GT 2+2.
Clue 2: Although she had lines like a Dino and was mid-engined, instead of a V-6 she had a V-12!
Clue 3: Longitudinal SOHC engine layout with a transaxle out back similar to a LM. She’s got to be RARE.
Clue 4: Engine #89XX meant it was high enough to be either 330, or 365 cc cylinder displacement. 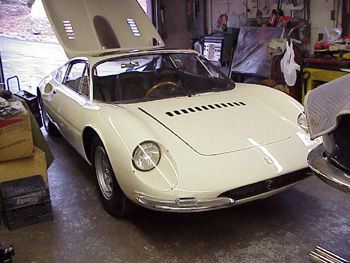 Clue 5: Here’s the cool part. Center steering! Seating for three, with the passengers riding as a pair of wing men/women! 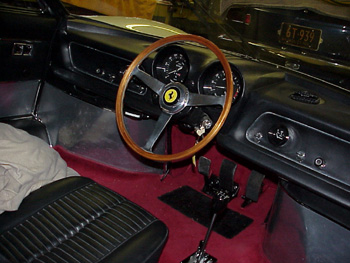 Taking all these notes home, I discovered this car was a 365P from 1966. At least two were made because I saw one in a book that was probably this one, and a second one painted in blue. One Ferrari book claims there may have been three. If anyone has anymore information on this special car, I’d love to post it here with these pictures!