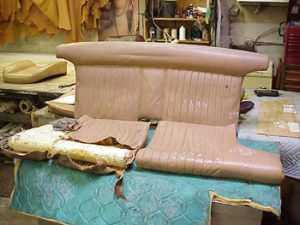 I went to East Coast Auto Trim and Upholstery today to put some more work in on my seats, and I found that progress was made while I away. The rear seats are being disassembled to see what has to be done, and it too looks like it will need new foam cushions. 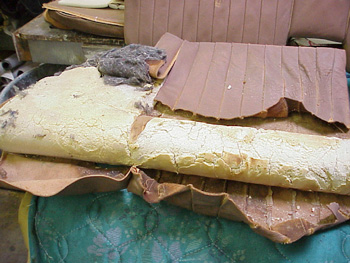 Just like the front cushions, the rear ones are crumbly and beyond repair. Frank told me that he will probably be taking my cushions to another upholstery shop in Long Island to make the new cushions instead of trying to salvage my old ones. The other shop has a large band saw that can cut and shape blocks of foam for seat cushions and will make it much easier to form than using a hand held cutter. 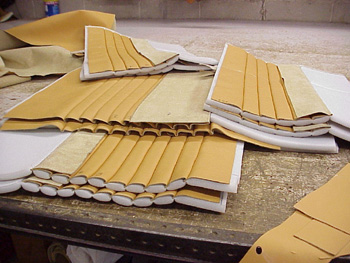 All the pleated center sections for the front and back seats were made already, so I’m very excited about the progress! 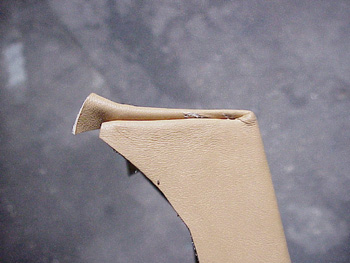 The last time I was at “East Coast,” I tried my hand at covering the rear ashtray base with leather, and tore the leather with the tucking tool. Leather is strong in certain instances, and very delicate in others, so I’m learning about how to handle the material. 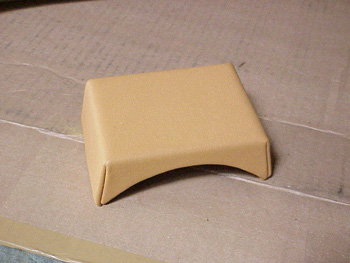 My second attempt was more successful. I was careful not to let the glue clump when spraying, pulled the leather with my hands as much as I could, and used the tucking tool with care so I wouldn’t have to waste another piece of leather! 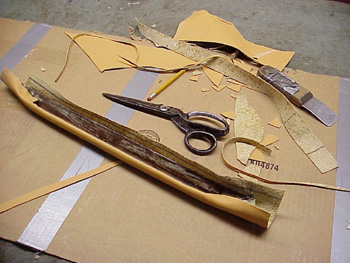 My next project demanded a little bit more skill than the last one, but I was up to the challenge. I wanted to cover the trim pieces that cover the tack strips under the seat backs. They are metal strips that are also covered in leather, but have a layer of foam underneath to give it a puffy look. After the foam was normally glued to the metal strip, I did as I was instructed, and SPRAYED GLUE ONLY ON THE LEATHER. This would allow the foam to remain springy.

Wrapping the leather around the end of these pieces was an exercise in patience and determination. I was so scared to cut too much leather away and be left with not enough to glue around the back side of the part, and yet having too much leather would bunch up when I was trying to glue it down. Ray and Joe, who work for Frank, coached me down from jumping off the edge, and showed me couple of tricks to get the leather to fit.

As I’m handling the leather, I can’t help but realize this stuff is SKIN! Now I like a good steak every now and again, so that’s not my problem, but I guess I don’t see leather in this state very often, and takes some getting used to. It’s kind of like seeing meat in styrofoam packaging, and forgetting that there’s butchering involved to get it to that stage. As I’m picking out the leather to use for my parts, I have to constantly look at the finished side for imperfections. The grain of the leather changes from the back of the cow, to the sides, and down by its belly. As an upholsterer, you need to match these types of skin to what you are covering so things look uniform. These are things I never thought about before working on my interior! 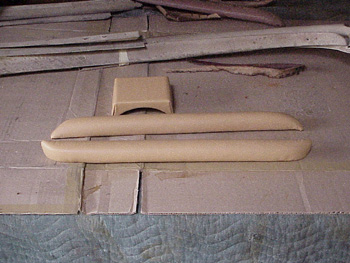