I took a break from the upholstery to work on the car this week, and got just about nowhere! I took the transmission cover up with me so I could sort out the overdrive issues once and for all. Last Fall, I found much of the overdrive electrics in disrepair, and didn’t get it working correctly before the snow began to fall in November. Now it’s six months later, and I want this overdrive to work before I put the upholstery in so none of the new carpeting and leather seats gets dirty working on the car’s mechanics.

It’s been almost two months since I drove the Ferrari, so I took her out for a spin to warm her up. I got about half a mile away from François’ shop, and the car cut off on me. I rolled to a stop, and tried to restart. Nothing. I checked my gauges, and there didn’t seem to be any power going to them, but the interior lights had power. Jiggling the ignition switch, the gauges went on, but when I went to try the starter, I would get nothing, and the gauges would turn off!? I took my test light out, and found power to the coils when the gauges were on, but would cut out when I would try the starter. I reached back behind the ignition switch to make sure there were no loose connections, and even tried bumping the starter while holding the wires in place. Still nothing. Trying to figure out what was going on, I tired the starter again, and she fired! I put her in gear and drove out to the main road to get her back to François. As I got to the stop sign, she cut out again. Luckily, François was going to the store, when he saw my Ferrari at the side of the road, and came over to see what was wrong.

He felt that it could be a dead battery, so he took out his yellow jumper battery out, and gave me a jump. The car fired up, and I drove the car back to the shop. Thinking my troubles were over, I put my car on a charger, and began my day of sorting out the overdrive.

An hour later of charging, I took the car out to test the overdrive, and she cut off on me again! This time I bought the jumper battery with me, and tried jump starting the car. Nothing. So it probably wasn’t the battery!

Trying to troubleshoot the electrics, I was amazed how many offers for help my Ferrari got when she was parked by the side of the road with her hood up! I finally gave up trying to fix the car and caught the next offer for help and got a ride back to François. We grabbed another battery, just in case, and headed out to rescue my Ferrari.

The problems were still intermittent, but eventually, the car started and I tried driving the car back. She got 200 yards away from the shop, and cut out again. When we got her started again, François took her out for a drive to see if it would happen while I followed in his car, but nothing happened! François took the car back to his shop, and said maybe I just have bad luck! Totally frustrated, we decided to check the electrical connections at the starter. This required I remove the right exhaust shield. Everything felt tight.

Although the ammeter does not show up in the 250GT wiring diagram, most of the power to the car runs through the ammeter, and a loose connection could cause this kind of failure. Pulling the ammeter did not show a “smoking gun,” but one of the connections may have been a little loose. Hooking everything back up, I took the car out for a test drive with my fingers crossed. I made it back without incident, but I will not feel completely confident until this day becomes a distant memory! 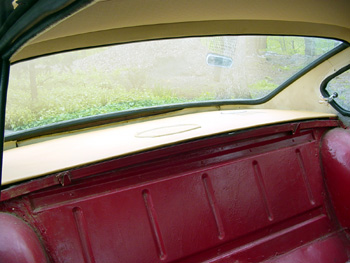 While I was up at the shop, I installed the rear panel under the rear window. It fits great, and looks great. There’s a trim piece that will go at the base of the rear glass to cover that piece of material hanging off, but otherwise I’m pretty happy with the way it turned out. I did notice however, with the light colored leather, it is almost impossible to see out the back window due to the glare! 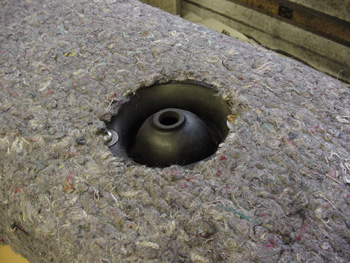 I also checked the fit of the Jeep shifter seal to my shifter, and transmission on the car. There is plenty of room to use it in this configuration, so I trimmed the piece down, and screwed it in place.