My Fiancee and I are thinking about buying a weekend place somewhere in Upstate New York, and we were out for a drive north on Interstate 684 in the Toyota. (If anyone knows of a nice three or four car garage with an attached house, let me know!) The Camry is an ’85 that has seen better days, but as most Toyotas, it just keeps on going. I wash it twice a year whether it needs it or not, and try to change the oil every 3-4000 miles. The air conditioning works great, and has given me very little reason to buy something newer, especially when I need the money for Ferrari parts!

Traveling at about 75 mph, we’re all of a sudden overwhelmed by a droning sound from the exhaust. I immediately think the catalytic converter went, since it was only part of the exhaust I didn’t replace in the last five years. As I’m trying to imagine what is going on under the car, I hear scraping noises, and the situation goes from bad to worse. I look in my rear view mirror to pull over, and I see small pieces and parts kicking up from under the car, and cars behind me swerving to avoid the pieces! Luckily,  a rest stop exit was fast approaching, so I pulled in to have a look. Knowing whatever was dragging could be fixed with bailing wire that I always keep in the trunk (what good mechanic doesn’t keep a spool of this stuff in their car?), but that would be provided it’s still attached!

I shut the car off to keep Deb from being asphyxiated, and peeked under the car. The catalytic converter was still there, clicking away as it cooled down, and the pipes leading to, and away from it were all there. Convinced this was the problem, I was baffled. I decided to start the car up to find where the hole was, and found it coming from the rear of the car. I guessed it was probably a hole in the muffler or something, so I walked to the back of the car to find NO MUFFLER AT ALL! That must have been some surprise for the car behind me to see a muffler coming at them on the highway. I’m so happy no one got hurt, or stopped to hurt me for scaring them half to death!

When I told a friend my story, he pointed out the irony that although I looked sooo redneck, with parts flying off my rusty old car, I actually own a Ferrari!

We drove around all day Saturday with the droning exhaust, but I knew what my “Ferrari Friday” would be instead this week!

I’ve been neglecting the Toyota, but I believe that you have to make deposits in the the Toyota Karma Bank if you want a reliable car. She has needed new brakes for months, and a tune up, so with the muffler incident, I thought it was due time to fix up the Camry. I ordered a Muffler, front rotors, front pads, rear shoes, distributor cap, rotor, plug wires, oil, oil filter, and an air filter. The plan was to try and get as much done today as possible to make the Camry a better car.

Replacing the muffler cost $80 bucks, and about an hour of my time to install it. Everything went well, with no seized bolts, or mis aligned hangers. It helped that the front pipe was changed last year, so the bolts hadn’t gotten a chance to really rust together. 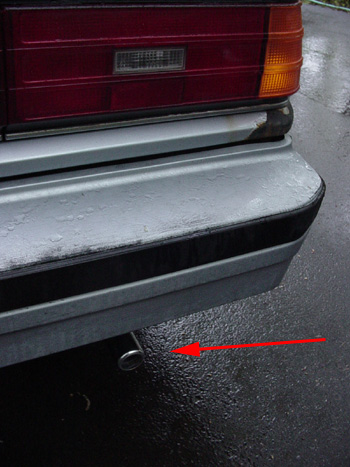 With a cool exhaust tip, my Camry is now stylin’! Now it was time to move onto brakes. Since I was already had the back of the car jacked up, I tore into the rear brake drums. I just wanted to replace the shoes, but soon I found one leaking brake cylinder. The cylinder was leaking pretty badly, so I couldn’t drive the car to the auto parts store, so I needed to get another car. 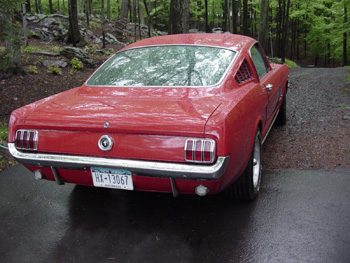 It was wet out, but I had no choice but to fire up the Mustang. The electrical gremlins I had last week with the Ferrari made me leery of getting stuck again when I was running out of time with the Toyota repairs. After a few seconds for the starter to prime the fuel bowl, the Mustang fired right up. I love old Fords! They’re so reliable.

I got the parts, and finished not only the rear brakes, but replaced the front rotors, pads, and did an oil change. The tune up will have to wait for another day, but that should only take a few minutes.

I promise to write about Ferraris on my next post!