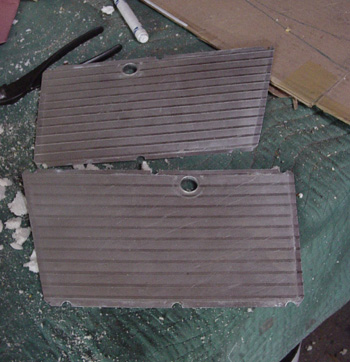 A couple of weeks ago, I mentioned that the door panels in may car had trim panels that needed refinishing or replacing. It turns out that ’57 Chevy Belair tail fins have a very similar panel. A couple of phone calls and e-mails found myself talking to a fellow Ferrari owner who went through the process of buying panels for his 330GT 2+2. His car, a series II, needs a piece that spans the whole door, so he managed to have Danchuk, the manufacturer, send him irregular panels that he could use for his car for about $100 bucks. These panels would not be useable for a ’57 Chevy because they had manufacturing flaws, but would be fine when cut out for a Ferrari. Unfortunately, when I tried to contact the same individual at Danchuk, I was told he was no longer with the company! When I explained that I would need even smaller pieces than a 330 2+2, they told me they would be happy to sell me a pair of slightly blemished panels for $300 bucks, but would not sell anything smaller, or cheaper. Not willing to part with my money so quickly, I decided to wait on this project, and consider refurbishing my original panels. 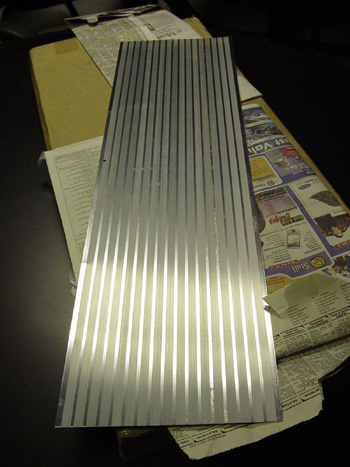 A week later, Buddy Obara, the 330 owner, e-mailed me and said he found a scrap piece that he didn’t use for his door panels. I needed two 7X13 pieces, and he had enough for three panels. $55 bucks later, Buddy shipped them to me ready for cutting! Thanks Buddy! 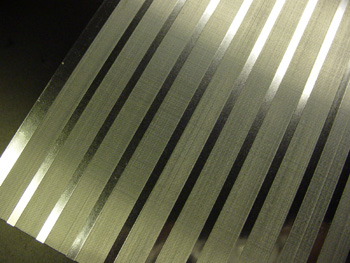 It’s amazing how similar these panels are to the originals. The shiny raised portions are slightly higher and the edges are sharper, but to the casual observer, they will look identical. Either way, they’ll look much better than my original ones!

The next step is to decide how I’m going to cut them. Tin snips will warp the panels, so I will have to find a guillotine type sheet metal cutter, or get them laser cut. There’s a sheet metal cutter at the CBS Broadcast Center where I can pay my friend Dave Dalianis a visit, or I can see if Mike Sewell can point me in the right direction for a laser cutter. Stay tuned!