Other Upholstery Projects, and Learning to Weld

6/13/03
Other Upholstery Projects, and Learning to Weld

I have a confession to make. I like to pick through the garbage. No, I’m not one of those people who stand knee deep in a garbage pile looking for cans, but when I’m walking down the street in New York City, and I see something being thrown out that is perfectly serviceable I’ll take it home with me if it’s within carrying distance. My wife and I euphemistically call this “Curb Shopping.”

We’re very selective with our curb shopping, so our house is not filled with crap we don’t need, so on occasion, we get a great score. Last week, I was walking past a small hotel in my neighborhood, and I saw a padded chair sitting by the garbage. I walked past it thinking one of the bellhops might have set it there to sit outside, but I decided to circle back and check. I walked into the lobby and asked if, in fact the chair was considered garbage. The guy at the front desk said they had just thrown it out, and I was welcome to it. I went outside to make sure it wasn’t broken, and carried it three blocks home.

The chair was made by “Thomasville,” and was a sturdy and well constructed, but the cover had seen better days, and there were a few scratches in the wood. It had some light cigarette burns on it, and smelled like it spent its life in a designated smoking room. With all the upholstery work I’ve been seeing done at Frank’s shop, I realized it wouldn’t take long to recover this chair and touch up the scratches, to make it nice addition to the apartment. 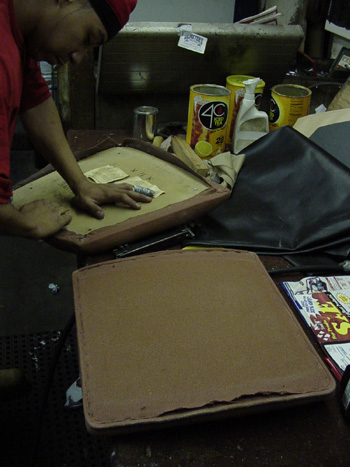 Ray, one of Frank’s employees, helped me remove one the covers as I worked on the other one. I managed to remove all the staples from my cushion just before a blister started to form on my thumb! The sure used a ton of staples! 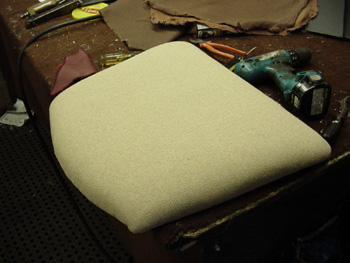 Ray recovered the bottom cushion before I finished pulling the cover off the seat back, and when Frank got to the shop, he showed me how to sew the welting around the seat back. 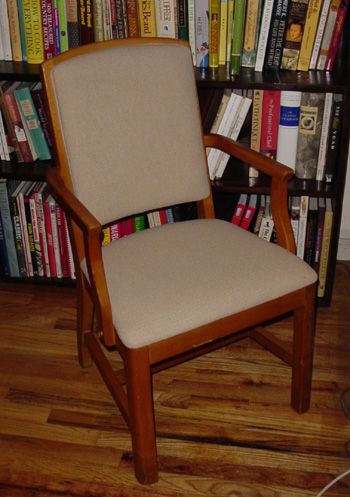 I brought the cushions back home, and installed them on the chair, and it looks pretty good. I learned how to recover a chair, sew welting, and I got a chair out of the deal. Not bad for picking through the garbage! 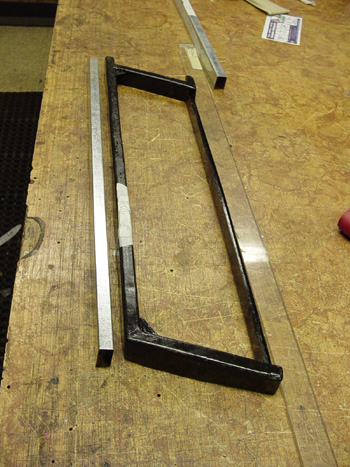 New sheet metal was bent for my door pockets today, so after I finished with the cushions, I started fitting in the new sections. 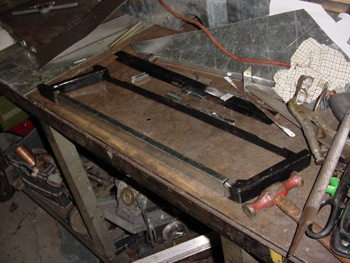 I took a hacksaw and cut out the old bent section, and cut the new section down to size. I filed the ends down to an exact fit and sanded the areas that needed welding to bare metal. Frank came over and began tack welding the pieces together with his MIG welder when I explained that I had never welded before. Thinking now was as good of a time as any, he handed me the welder and said, “have fun!” 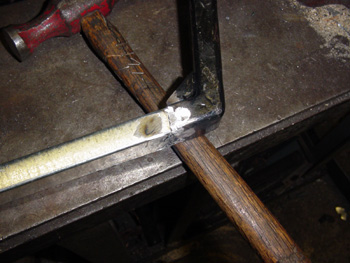 He wasn’t welding with a mask, which was too dangerous for me to try. I’ve seen a lot of welders do this by closing their eyes right before they strike an arc, and only opening their eyes after they finish. It’s an easy way to flash your eyes, and ruin your vision, so I put on his welding helmet. 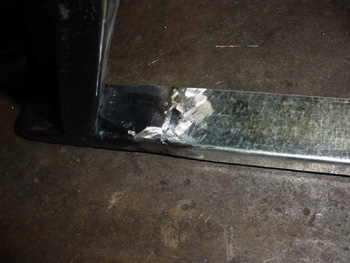 It was a lot to juggle between the piece I wanted to weld, lining up the nozzle and the wire, covering my eyes with the helmet, pulling the trigger, finding the arc through the opaque lens, and welding. My welds were horrible. Splattered metal, burned holes, and gobs of weld misplaced everywhere was my first attempt. I did get better, but the only pictures I dare to show are the ones I took after I ground all the really bad stuff away! 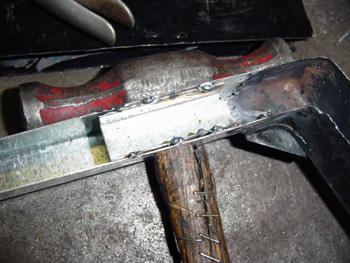 I also made some brackets out of sheet metal to tack weld in the back of the frame for the attaching screws. These welds didn’t need grinding, so you can see how bad I was.

I guess now that Frank is allowing me to use the welder, I’m going to take every chance I get to practice. I’ve been wanting to learn to MIG weld for a long time, but haven’t had access to one. I may invest in an auto dimming mask though, because it’s not fun doing that “welder’s nod” every time I do a weld! Call me an amateur, but why make things more difficult?