Frank and I decided that the best way to get some work on my seats was to spend an uninterrupted Saturday at the shop. Since I’ve been nursing a cold for the last few days, I took Friday off to rest, and made it up with a Ferrari Saturday! 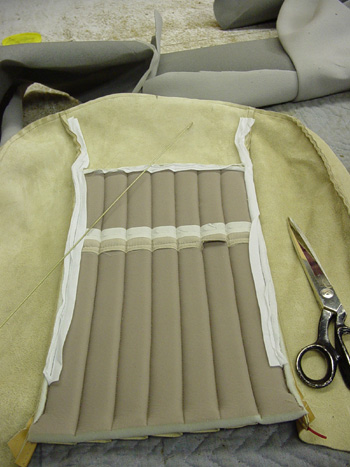 The first task of the day was to cut wires to fit in the channels that were sewn into the leather covers. These wires will be hog ringed to the frame and will give the seat its familiar shape. 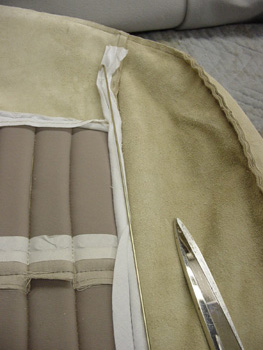 The wire I used was the diameter of a coat hanger, in fact, it was a coat hanger! I bent the ends over tight so the wire wouldn’t snag on anything or poke through any material. Each seat back required four separate wires.

Frank began fitting the leather to the seat, and it required a lot of stretching and pulling of the leather. It was a real wrestling match, that required the both of us pulling at different sections. I couldn’t take any pictures of the process because I had my hands full, but it was almost comical in the amount of struggle to get the leather to fit right. Frank wanted things to be tight, and took the leather off several times to add foam to fill the seat back. 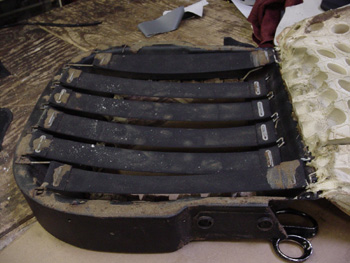 While Frank was fitting the leather cover, I took a break and began some work on the seat cushion. Under the foam seat cushion (which is in useable condition) are these black rubberized belts. They were completely stretched out, and cause the seat cushion to bottom out on the frame of the seat. 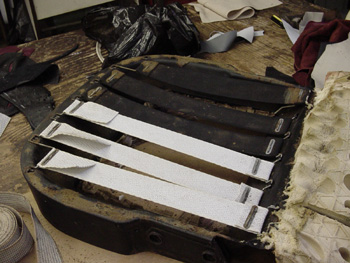 Frank had these elastic bands to replace the old ones. Too bad they weren’t in black! 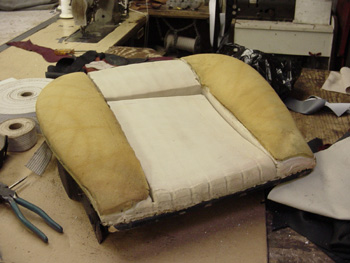 After I finished one side, I flipped the foam back on to see the difference. You can see how the right side of the cushion sags down. After I finished the whole side, I tested out the seat with my own butt. The seat felt much better, but still seemed to sag a little too much for my taste. I know that in the seats that I’m borrowing from François to use in my car right now suffer from the same problem, so making sure I have adequate support is important. 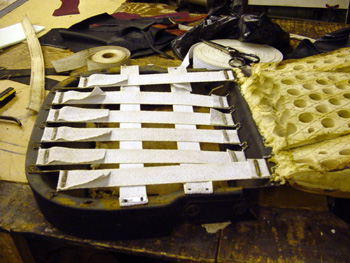 I decided to add an additional two rows of elastic banding to give just a bit more support. From my testing, the seat cushion still feels like bucket seat, but not an actual bucket! I know with my aging back, the extra support will be welcome. 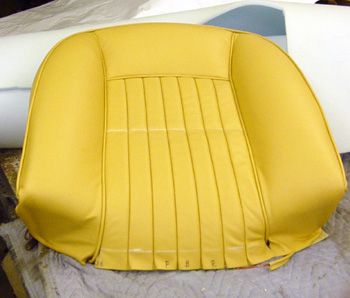 By the end of the day, one seat back was fitted, and tacked in place. The final fitting of the bottom will not happen until the seat cushion is done. Frank wants to align the pleats on the seat back with the pleats in the seat bottom, so this area will not be secured until the end.

You can now see where the leather is pulled from behind from those wires I ran. The wires ran along the inside piping, and one more can be seen under the chalk line in the middle of the seat. This is a subtle crease, and is tied from behind when just the right amount of pull is achieved. We’re really getting somewhere on these seats!