A couple of months ago, someone sent me an e-mail about a 330 America. It was one of those e-mails that make the hairs on my neck stand up, and my palms sweat. A D. Wilson told me about a 330 America that she has owned for 30 years that has sat dormant in a barn for most of that time. I re-read the e-mail to make sure I was reading the information right. One of the secret dreams I have about running this website is having someone contact me about an old Ferrari that has been sitting in their garage, and because I’m doing such a great job resurrecting my car, would I be interested in restoring theirs. This didn’t turn out to be that person, but it’s a pretty good story!

The car has been sitting in a pole barn for 30 years and has 17,000 miles on the odometer. As you can see it is ROUGH! 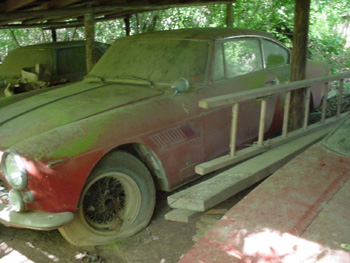 Deborah Wilson has owned the car for the past 30 years, and has watched the market go up in the 80s, and back down in the 90s. She has an idea what the car is worth, but would like to find someone who will restore the car, and not chop it up. 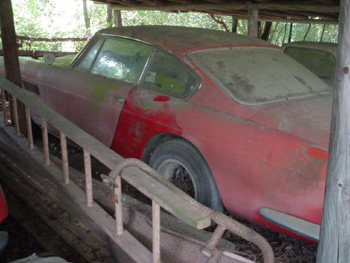 “In 1989 a guy form Columbus Ga. tried to Broker this car for me,
without my knowledge.  Julius Erving , the basket ball star offered me
$160,000, for it.  I turned it down, for two reasons.  First,I was furious
that the man had the nerve to offer my car for sale without telling me,
especially when I told him I didn’t want to sell it.  Secondly , Dr. J told
me that he intended to have the car converted to a 250 TR.  I thanked him
and kept the car.   In the past we have had hundreds of people try to buy
our old American classics to turn into street rods and such and have always
held onto the cars hoping to find someone who wanted to restore them.
Ferraris have depreciated in value since those big money times.  I don’t
regret losing the big money.” 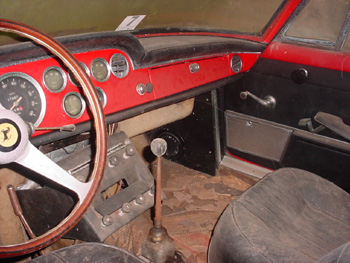 The story gets even better. If you look up the SN 4973, you’ll see current information on this serial number stating that it is a Testa Rossa conversion made and registered in the UK!?! Well, if Deborah is correct about her serial number, the car, chassis, and engine are still intact! You can draw your own conclusions about how the TR in England came to be! 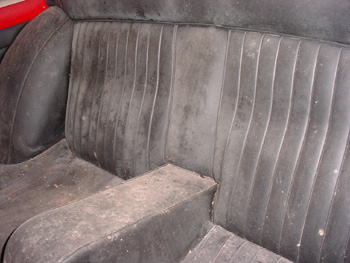 Ms. Wilson claims to have been contacted by the owner of the TR conversion in the UK with money to buy her car, but we can all guess what the fate of this chassis, and engine will be when it crosses the Atlantic! She has refused his offers, and anyone who has coincidentally found her phone number from the UK. 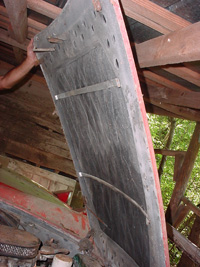 I’m posting these pictures to help Deb find a good home for this car. There’s a good possibility that if a dealer buys this car, they will immediately offer it for sale to an overseas buyer, and another 330 America will be lost for ever. I’m hoping people will be a little less short sighted for the sake of profit. There will be a day in the future when we’ll look back and wonder why no one bothered to save all those old Ferraris! 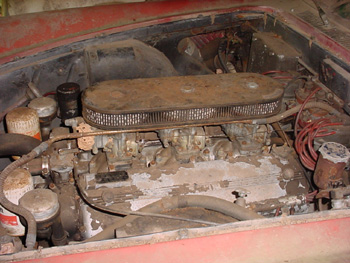 I know this car is in dire need of a restoration, and it’s cost could be dear to the owner, but with less than 50 330 Americas in the world, I can’t think of a more worthy project! 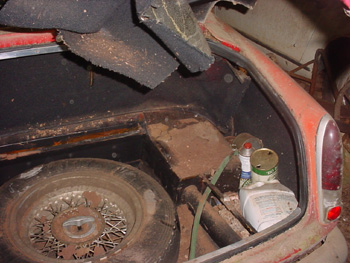 The car is located in Alabama, and Deborah Wilson’s phone number is: 256-329-1517. She can also be reached by e-mail:
coven@webshoppe.net
I think she’s entertaining offers around $35K, but the emphasis lies in finding this car a good home. She also has some other Italian cars on her property in similar shape like a Maserati and Pantera. Good luck! 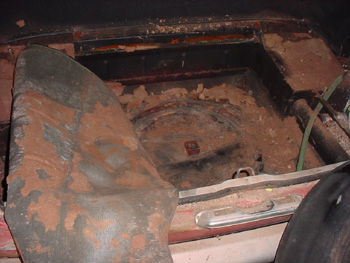 BTW, the tool kit is missing a bunch of stuff, but includes the hub puller, and some wrenches.