Here’s a story of another 330 America that starts over three years ago. I started corresponding with the owner of #4969 about his 330 America badge back in July of 2000. Since then, I found a badge, but we’ve been in touch, and shared information on each other’s cars. Henry has owned his car since 1967, and it has been left largely unrestored. The car has about 60,000 miles on the odometer, and shows the classic signs of worn valve guides and oil rings. The smoking is so bad that Henry had trouble driving the car on California roads because the police would pull him over! This old 330 America was in dire need of an expensive engine rebuild.

With old 2+2 Ferraris, the prospect of an engine rebuild can cost 1/3-1/2 the price of the car! Taking on this expense is usually complicated with other things that need fixing on the car, so the price of repair escalates from there. Henry needed to decide whether to fix the car, or sell the car.

I often receive e-mails from people looking to buy Vintage Ferraris. After weeding out the tire kickers, I occasionally find one or two individuals who are ready to buy, and understand the expense of owning an old Ferrari. One such e-mail came from a guy in NY named Michael Greenspan. He explained it was time for him to realize a lifelong dream to buy a Ferrari, and on the eve of his 60th birthday, he was more than ready. Although Michael was looking at ready-to-drive Ferraris, I thought about Henry’s car sitting in California.

Although Henry and I never talked about him selling his car, I decided to see what he would say. I was actually surprised to hear he was open to the idea, and arranged to go out there to look at the car. Since I was going out to Monterey, CA for the Pebble Beach Concours in August, Henry and I arranged to meet at his house which was an hour drive from Monterey. 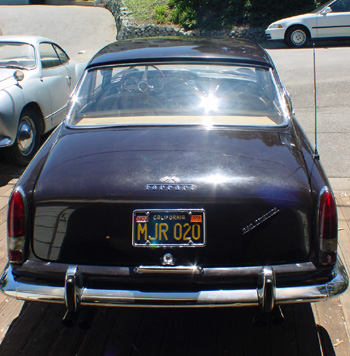 When I arrived at Henry’s house, I found the 330 America to be this neat chocolate brown color. It was refreshing to see something besides “Corsa Rossa” in a Ferrari, especially after seeing a sea of red Ferraris at Concorso Italiano in Monterey! The car showed all the signs of 40 years of regular use, and was a wealth of information of what an unrestored 330 America should look like. 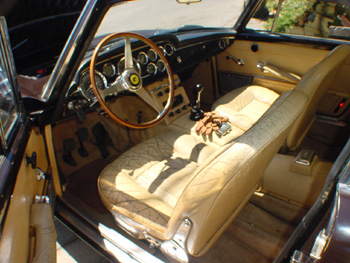 The leather seats were well worn, and cracked in some places and to some people, this would be nothing more than an old worn out car, but to me she was a sweet original car with all the history of it’s past two owners. 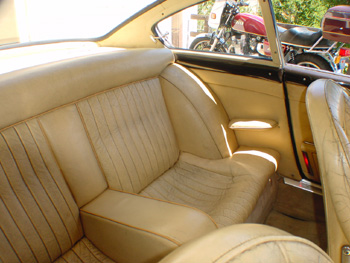 The rear seats were in better shape, but the dry California climate had taken its share of moisture out of the the Connolly hides! 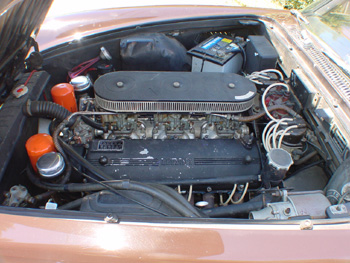 The engine had many original details, but also showed the signs of missing pieces. Luckily Henry kept almost everything on this car, and it only took a few minutes of searching in his garage to find most of the things that were missing.

The drive showed everything in decent working order. The engine started well, and idled evenly, and the car drove surprisingly well. Henry had rebuilt the front suspension, so there was no looseness in the steering. Even the overdrive worked! As we drove back to the house, the car started to smoke, but it didn’t seem as bad as I thought it could have been.

I had a nice visit with Henry and his wife, talking about the history of their car, and how it changed their lives. I should only hope to have such a stewardship of my 330 America! This history made it even more difficult for Henry to consider selling his car, but without an engine rebuild, this 330 America would easily fall into disrepair. Having seen other old Ferraris suffer the same fate, and get dismantled for their parts, I wanted to try my best to keep this from happening. I assured Henry that if he agreed to sell the car, I would find him an owner that would preserve the car in a loving home, just as he provided her for the first 40 years of her life. I left their house with my notes and digital pictures to bring back to NY to find that home.

Upon my return, I sent Michael an e-mail telling him about the car and sending along the pictures. François also had a customer that was interested, so we told him as well. I made certain that they understood that this car was not for the feint of heart. This car needed work, which would definitely include an engine rebuild in the near future, along with most everything else after 40 years of regular use. I secretly wanted to see the car come to the East Coast so it would be close to her sister, my 330 America, but finding a sympathetic owner was paramount!

It only took Michael a weekend of obsessing to get back to me and tell me he was seriously interested, so I began the process of getting these two gentleman together…fast forward a couple of months, and the car was delivered to the East Coast, and in the care of François Sicard.

François agreed to take on the repairs of 4969, and help guide Michael in his new adventure. François’ assessment was just as I described, a requisite engine rebuild to eliminate the smoking. Since Winter will soon be upon us in the northeast, the decision was made to go ahead with the rebuild. Stay tuned for more on this 330 America!