A friend of mine who lives out in Long Island told me about a truck his neighbor might sell. It’s a ’87 F150 4X4 regular cab pickup with a short bed. The owner said he would take less than $1000 bucks if he could find his old truck a good home, and since I’m a sucker for bargain, I went out to take a look. 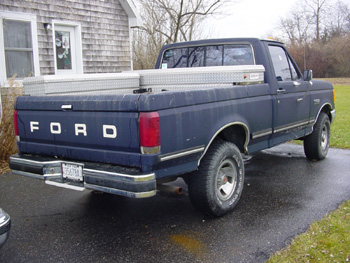 It’s got a manual transmission and a 6-cylinder engine with 165K miles. Although it may seem like a lot of miles, a Ford 4.9 liter six will run forever. Since this this truck was owned by the same owner since new, I knew the engine saw oil changes every 3000 miles. The transmissions were just as durable as the engines, so it was looking like a good deal. She needed a radiator, and one of the gas tanks had a pinhole leak, but the tires looked like there was plenty of meat left on them, and the exhaust was relatively new. 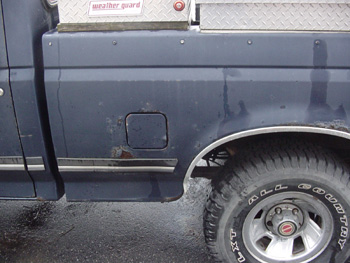 There were a few rust spots near the filler neck, and fender lips, but for this kind of money, I could get three or four years out of the sheetmetal before anything needed to get addressed. 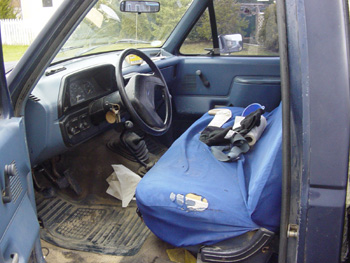 The interior was a little rough, but it was a work truck! As long as it had a seat to sit in, I would be fine. 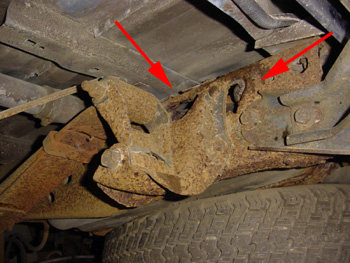 I started looking closer at the frame after the exterior inspection. Most of the frame was solid, without any signs of major rust, but then my eye caught some swelling of the frame near the left rear spring shackle mounts. I reached up to touch it, and a big piece of rust flaked off in my hand. I reached up again, poked, and my fingers went right through the frame! It was obvious the owner had no idea this was happening back there, and was pretty surprised to see so much rust falling onto his driveway. I apologized for make such a mess because I really felt bad! It would have been a good truck for me if not for the rusty frame. Although I could repair this damage with a section of frame from a junkyard and a welder, I just don’t have the time or the inclination to get involved with such a project. I kept telling myself on the drive back to the city, “It’s not a Ferrari worth saving from oblivion, but an old Ford pickup where hundreds of thousands were made. You’ll find another one!”