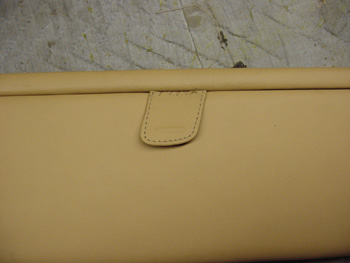 Since I was away for two weeks, Frank got quite a lot of work done on me interior. I’m now backlogged with work, which isn’t necessarily a bad thing! The first thing I worked on was the door pull that Frank had a chance to sew. I had to take the complete pocket off the door panel to install this tab, but it was the only way to do it right. 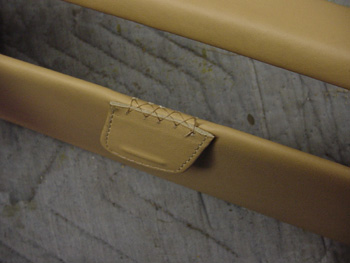 There is a metal clip that holds the door pull to the door, but it is not a real secure way of keeping this tab attached, so Frank had me hand stitch the tab to the door. Now there won’t be any chance this tab will work its way out from under the clip. 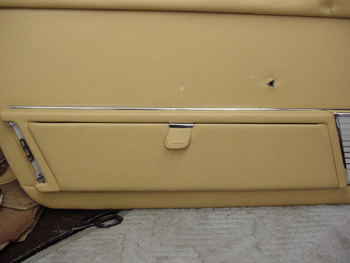 Here’s one door pull installed. I struggled with the positioning of the pull tab because it looks wrong, but I believe is correct. It would seem that the tab should follow the slant of the door pocket, but looking at some original cars, the tab is reversed, as I have here. I know that some GTEs have them the opposite way, but I think they were re-upholstered. Can people out there with original interiors confirm I got the tab oriented correctly?

I stopped in a Napa Auto Parts store and picked up a $9.00 dollar box of Butyl Glass setting tape for my water shields. This stuff is pretty sticky stuff, and won’t harden with age. It looks like the same stuff I find in most modern cars that hold their water shields in place. 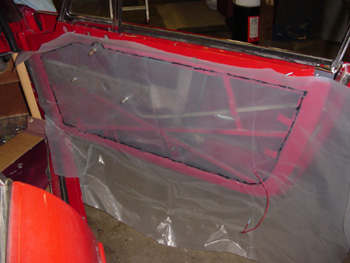 After sticking a 1/4 bead of the butyl stuff all around the door opening, I attached the plastic sheeting to the door. The butyl tape comes rolled up in a 3/16 inch continuous roll, but easily thins as you pull on it. The trick is to get it to stick to the door before it sticks to your fingers. I used the non stick backing paper that came in the box to help me work the stuff onto the door. Once the plastic is tacked into place, I trimmed it to size with a razor blade. 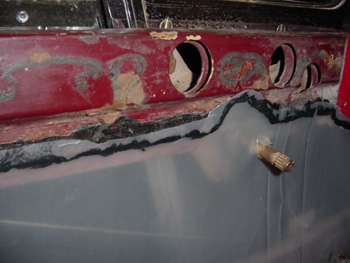 Even with the slippery plastic, the butyl tape has no problem sticking. As you press all along the circumference of the door, you create a weather tight seal. 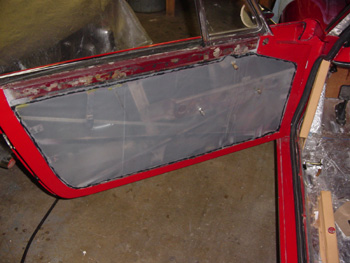 Here’s one door almost done. I realized after I took the picture I forgot to fish the wire out for the door light! Doh! Luckily, with this stuff, the plastic comes off cleanly, and reattaches with the same amount of stick! 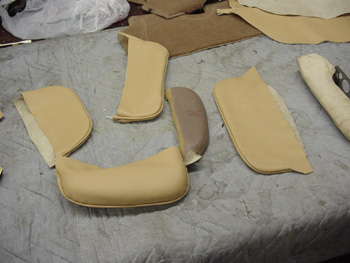 By the end of the day, I started laying out all the parts Frank sewed in the last two weeks. I didn’t have time to do any upholstering, but it’s nice to make a plan.