Last week I mentioned that I had a question on how the door pulls should be oriented. Well of the 50/50 chance of getting it right, I think I chose wrong! Here’s how it happened. 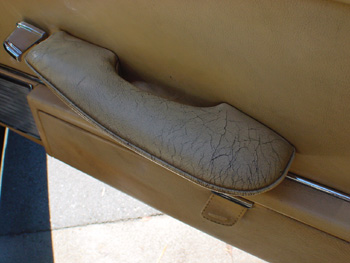 Both of my door pulls were torn off my original panels, so I didn’t have anything for reference. I took pictures of Michael Greenspan’s 330 America, #4969, before he bought it in California, and when I was looking for pictures of the door pulls, I found this one. It’s the right door panel, and from this angle it looks like it is angled towards the front of the car. When comparing to the pocket in this picture, it looks like it is oriented in the opposite direction, so I mounted my tabs accordingly. 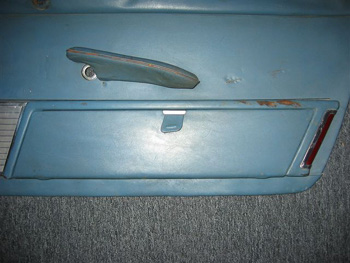 Then yesterday, I received an e-mail from Frank Botti, the owner of 330 America, #5027, with this picture of his right door panel. The tab is oriented forward as well, but look at the pocket. The pocket is slanting in the same direction as the pull tab! In the picture of #4969, the angle of the picture deceives us into seeing the pocket going the opposite way!

I guess I’ll have to take the door pocket off AGAIN!!