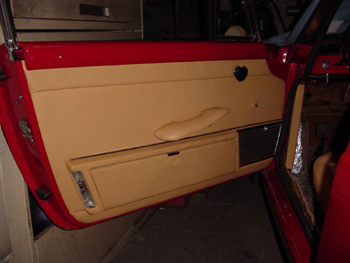 I mounted the left door panel today after putting together the last armrest together. It went together just like the last three, so I won’t bore you with the details, but it’s certainly getting easier! Easier unfortunately doesn’t necessarily mean faster, because there are still many details to cover for these armrests!

With the top cap piece mounted, the door panel is really starting to look complete. Unfortunately, there is a clearance issue with the weather stripping and the top cap molding, so I’m going to have to do some adjusting. 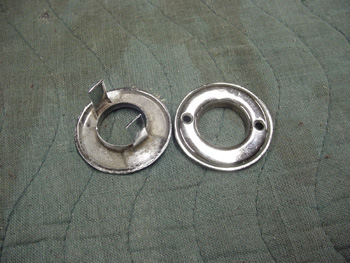 Last week I was wondering which bezel went were on the doors, and I figured it out by looking at my old door panels. The one with the tabs belong on the door release under the armrest, and the one that is attached with screws is for the vent window knob. It’s a good think I don’t throw anything out! 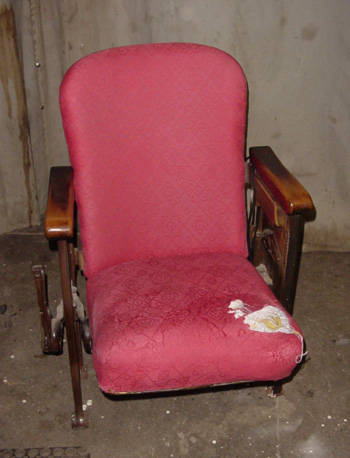 Needing a break from the door panels, I took advantage of the time and fixed a set of theater seats I had in my apartment. These came from “The Ed Sullivan Theater” in New York, which was originally named “The Hammerstein Theater.” These seats are probably original seats from the turn of the century when the theater was built. A few years ago, we were building a set in the balcony where a bunch of these original seats were still mounted to the floor, so they had to be removed. The cushions were in horrible shape, but the cast iron frames and armrests were in good shape with beautiful patina, so I managed to snag two end pieces from the trash. I took them home, recovered them with some cloth, mounted them on some carpeted plywood, and used them for a computer chair! Unfortunately, I chose a cloth that was not too durable so after a few years of use, the seat wore through, and they needed some serious help. In the past year, I’ve learned a lot about upholstery working at Frank’s shop, so it was time to take my seats in to get them presentable again. 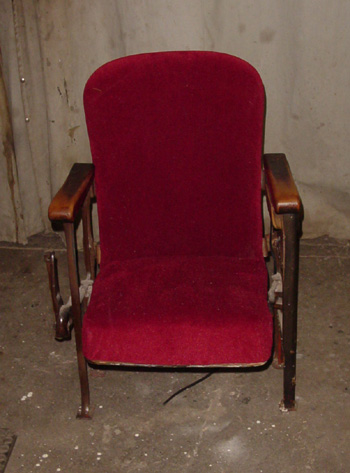 Frank had some nice red velvet material that was probably all the rage for cars in the 70s, but hasn’t been too popular lately, so I cut a couple of yards for my seats. He showed me how to mark the fabric and where to sew the seams. Frank even let me sew one of the covers on his machine! The one you see here is actually the one I sewed, and I think it looks fine. There is always room for improvement, but it’s a start.

My secret plan is to keep learning how to sew, and practice as much as I can so maybe I can do some of my sewing for the Ferrari and not have to rely on Frank. Projects like these will help me hone my skills so maybe I’ll get good enough to get by. I have about six pieces of carpet left that still need the binding sewn on, and Frank has been pretty busy with other projects. Although he thinks this is too difficult for me to just pick up, I’d love to give it a shot. I’ve got plenty of carpet and binding left to practice on, so I’ve got nothing to loose but time!