Return of the Ferrari Friday!

It may not be permanent, but I�ll take whatever I can get! I got my Friday�s off from work for the summer, so provided family obligations don�t get in the way, I�ll be back to work on the car!

I began my day by working on trimming the header piece that sits over the windshield. There is a piping piece that needed to be sewn to the headliner material, so Frank marked and sewed the piece since the last time I was at the shop. 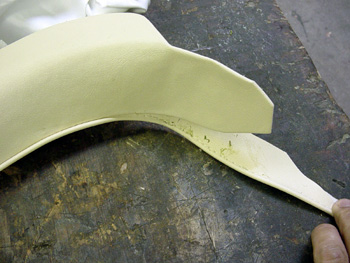 The ends are not sewn, but are left free to glue into place when the piece is mounted to the car. 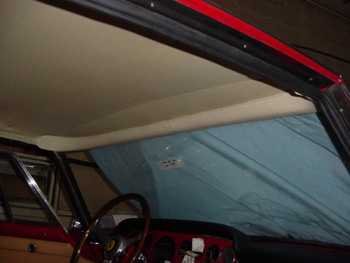 I took some hunting to get the screw holes to line up, but eventually everything fit together and was secured.

Just to show you how forgetful I am, the piece of tape on the inside of the windshield is to remind me what order the gauges go back into the dash! It was easier to tape the note to the windshiled than to look up the picture of the gauges in the owner’s manual! 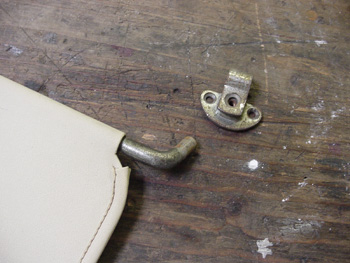 It was time to dig out the sun visors, but I found them pretty cruddy. I may some day have these pieces chromed, but I would have to try to clean these pieces up for now. 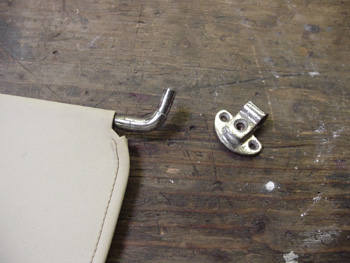 After some buffing with some chrome polish, they looked a whole lot better. They�re still a little pitted, but they will have to wait until next winter to get re-done. 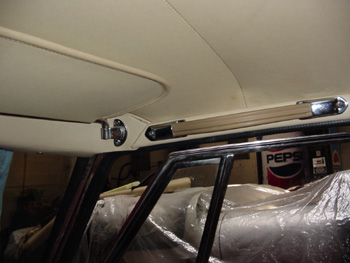 I also dug out the grab handles to mount to the interior. This corner of the car is largely done. I still have to mount the painted trim piece that covers the A-pillar, but it�s getting there! 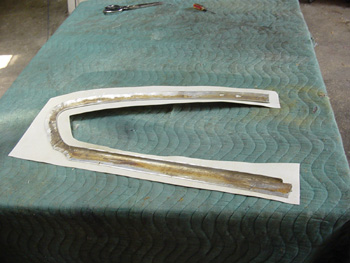 Moving rearward, I began to cover the trim piece that goes around the rear window frame. I can only do this one because I sent the other one out to repair a break in the aluminum. 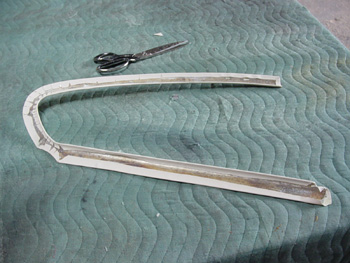 After gluing the face of the piece, I flipped it over and trimmed the material close to the edges of the aluminum. I also �pie-cut� the areas that needed it so it would lay flat when it was glued down. 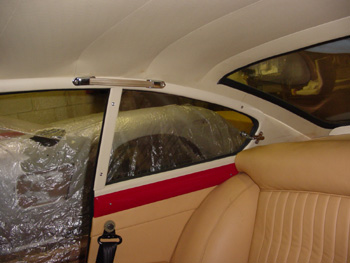 After the rear window piece was covered, I immediately began mounting it in place. It�s amazing how many fiddly pieces there are to the interior in one of these cars. In this photo, there are three trim strips that get at least two screws to mount, a grab handle that
get four screws, a window pull that gets two screws, and a painted trim strip that gets two more screws. Thankfully, Frank�s shop has an assortment of screws and washers specific to this type of interior, so I wasn�t wasting time looking for fasteners. It still, however, took a lot of time collecting and mounting all the screws! 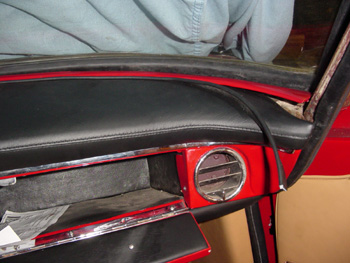 The next order of business I need to address is to install the piping that runs along the edge of the top of the dash. The piping finishes off the edge between the painted trim piece that double as a defroster vent, and the top of the dash. The piping needs to be glued in place, but I ran out of time to finish this project. Thankfully, I�ll have another Ferrari Friday to hit it again!