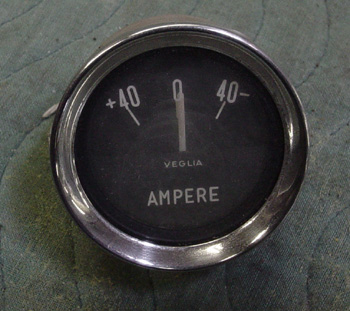 Several weeks ago I decided that I would have to re-do my cloudy gauges in the instrument panel to match the level of restoration I attained with the rest of the interior. Not going that little bit extra this late in this project would be foolish.

My first call was to D&M Restorations in South Carolina. They did a wonderful job with my clock a few years ago, and I wanted to get an idea how much it would cost for him to do the rest of the gauges. Mike explained that the plastic inserts Veglia used yellowed over time, and no amount of cleaning or polishing would clear up these lenses. The only solution would be to replace these lenses with new ones made from scratch. These plastic lenses also had silk screened numbers printed for each of the gauges, so there would be another step where each new lens would need new letters applied. 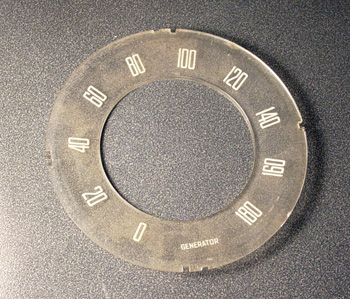 The small gauge inserts are flat, and relatively easy to remake, but the re-manufacture of the tachometer and speedometer lenses gets more complicated! (these lenses are not from my car, but loaners to see if I can remake them) 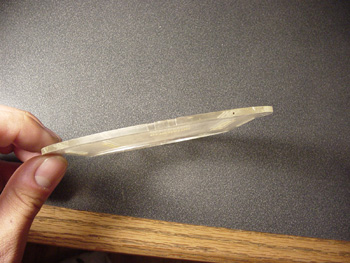 These lenses have a bevel in them, so Mike says that he has a way of making these lenses, but takes a lot of handiwork to make them look like the originals.

After my first lesson on these gauge lenses, I asked Mike how much it would cost for me to have just the lenses remade and silk screened, with me removing them and reinstalling to save some money. His price would be about $800 bucks. Determined to save even more money, I began calling around NYC to see how much of these lenses I could make locally.

I took my cloudy plastic lenses to a place called “Industrial Plastics Supply Company” here in NYC. I showed them my small flat lenses, and the guy remarked that they were originally molded, but he could easily duplicate these lenses by laser cutting them on his machine. He would need an Adobe Illustrator file of the shape of the lens so he could input it to the cutter. I asked him if he could get me an estimate, so he looked it up in his book…”about 275″ he said…I paused, and said, “2…” “Yeah, $2 dollars and 75 cents each.” I left IPS with the “Illustrator” requirements, to have my lenses scanned, and drawn.

Lucky for me, my wife works at a digital imaging department of a magazine publisher, so getting the lens scanned, and drawn was a simple as asking one of our friends to help out. Our expertise is in Photoshop, but when it comes to Illustrator, it’s easier to have someone else do the mechanicals than for me to learn another skill set to do a small job like this! Miguel did a great job, and burned my files to disk, so I was back at the plastic place in a few days.

When I dropped off the files, Emily at IPS and I discussed how I would want my pieces lettered. She explained that they offered silk screening, but felt that it would not be cost effective considering it could cost $80 bucks to make one screen for one gauge. She offered two other solutions that were the same price. One was to reverse etch the lenses with the same laser that would cut the plastic, and a second alternative was to make vinyl letters that can be applied to the surface of the lens. I don’t think one could tell if the lettering was made of vinyl, provided they didn’t come off over time!

I was very intrigued by etching process, so I asked them to make one lens for me with the etching, and I would decide which process I would choose for my finished product. The quote I got for the first batch of lenses and a couple of etched lenses was about $40 bucks. 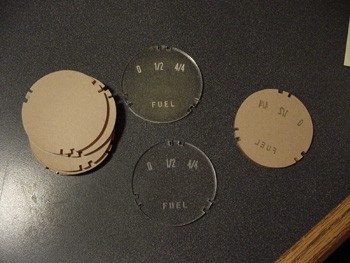 The turn around time was one day, so I didn’t have to wait long to see how it went. The lenses are perfectly cut, and the etching looks pretty good too! The lens at the bottom is the new one, and the one on the top is the original. The etching is a little lighter than the original lens, but I plan to try my hand at painting the letters in manually. The lens at the right is a second etching in case I screw up the first one.

I’m going to place an order to have them make one with the vinyl lettering to see how it looks as well. Although I would love to have mine silk screened, I feel I have a responsibility to see all our options. Mike at D&M would be happy to silk screen the lenses I made up, but I’m curious how good the cheaper alternative could be!

So far, I’m excited with what I have!