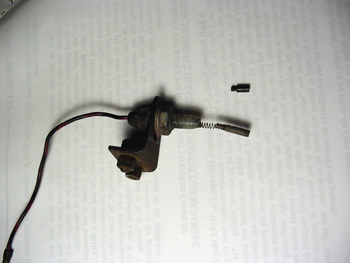 One area that needed addressing was under the steering column where a part of the horn circuit lives. The horn button behind the famous Ferrari prancing horse gets voltage from the battery through a carbon brush that is mounted at the bottom of the steering column. This allows current to flow to the switch while the steering wheel is turned. On my car, this carbon brush was worn past it’s adjustment, and needed replacing. This picture shows the new brush mounted in the spring, with the old one above it. The new one is twice as long, hopefully giving a few more years of use before it will need to be replaced again!

I searched the Internet for sources for carbon brushes, and most of them wanted me to order a box of brushes. These brushes can be found for electric motors, and it was simply finding one that had a similar dimension to the one I was replacing, but I only needed one! I then remembered there was an electric motor store on Canal Street in NYC that may have the part I was looking for. They have all sorts of used motors, and I was sure they would have something.

I went down town during lunch, and showed the guy what I needed. He reached behind the counter and pulled out a box filled with old motor brushes. Most of them were square, but there were some rod shaped ones like the one I was looking for. After getting both of our fingers black from all the carbon, we found a couple of candidates for my replacement brush. The rod was still too thick to fit in the holder, but I figured it was worth a shot at trying to machine down the rod to the correct size. He wanted $6 bucks each for the brushes. I thought this was way too much, so I offered him $5 for one, and he accepted. I still think I paid too much, but I really wanted to get this horn working this week.

On the subway ride back to work, I envisioned how I was going to get this piece mounted in a lathe without cracking the fragile carbon. The piece I chose had a threaded rod in the back of it, but who knew how long inside the rod it went. I then asked myself why I was making things so difficult? When I got to work, I mounted the rod in a drill chuck, and began turning down the rod with some sandpaper. Within minutes I had the rod down to the correct diameter, with very little stress placed on the carbon rod. Sometimes, you have to step back, and do things the simple way! 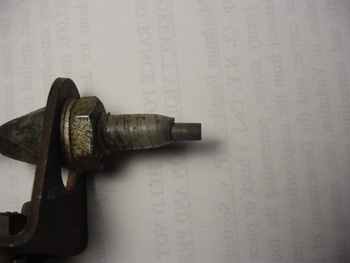 Here is the new rod mounted in place with the spring fully retracted. I now have at least 3/8ths of an inch of travel in the carbon rod before it wears out.