I got back from Monterey late Sunday night, and it was mind blowing! Ferraris were featured at many of the events, so I was kind of prepared for the amount of cars I was going to see at the three events I attended, but I was also pleasantly surprised by cars I wasn’t expecting to see.

First off, the annual tomyang.net cocktail party on Thursday night was a success. I got to meet many of the inaugural attendees from last year, and several new faces I can now put to names. I want to thank Tom Shaughnessy for arranging the room for us to use, and everyone for bringing something to the party.

I went to Concourso Italiano on Friday instead of the event at Quail Lodge. Unfortunately, because this is the second year split of the Friday’s events, some of the earlier cars went to Quail Lodge, so there were practically no Ferraris made before 1960, and no GTOs. I’m not going to get in the middle of the politics of this split, but I am going to complain about the dilution of the events because of it!

The Concourso Italiano event, though missing early cars, made up for it in sheer volume. I did not get actual numbers, but there were easily 200 Ferraris parked on the show field. Many of these were newer cars (I consider anything newer than ’72 newer!), but there was a fair representation from the early cars. There were even 2 330 Americas in attendance! You may ask where are my pictures of this event, but I have to admit that I didn’t take any! I was so busy trying to meet everyone, I didn’t get a chance to pull out my digital camera!

Actually I lied, I took one picture! There was a neat display of Riva boats. Not something you get to see all that often. Ahh, those Italians! 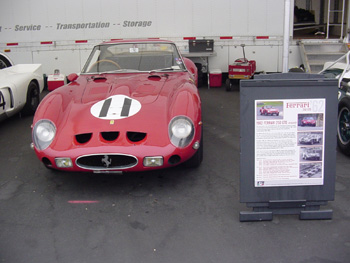 On Saturday, I had some more time to take pictures. The Ferrari fans at Concourso were all talking about the GTOs that were at Quail Lodge, and how they would be at the track on Saturday. Here’s GTO #3647, one of 39 in the world. There was a lot of speculation how many GTOs had gathered here in Monterey for this weekend, and I heard anywhere from 17 to 20 of them. Whatever the number, I was luckily to have seen them all there! 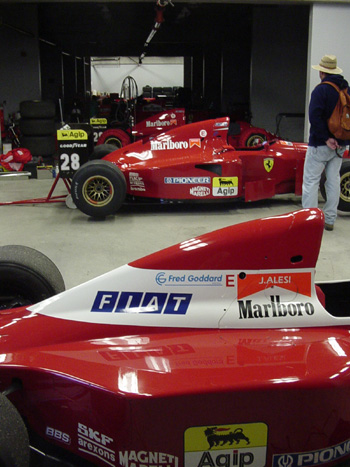 An added bonus was the arrival of Formula One cars the Ferrari factory sent to Laguna Seca for demonstration purposes. They ranged in age from the 80s to a modern ’04 version, similar to the one Shummacher drives today. I got there early enough in the morning to peek into the garages and walk among the cars. The factory mechanics were pretty laid back about it, which I’m sure is not the case at any F-1 race weekend. 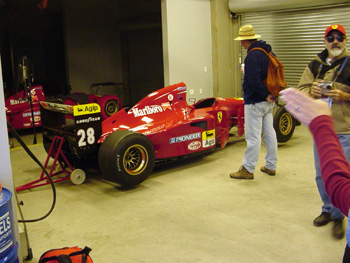 Later in the day, we got to see all these cars drive around the track at speed, and even got to see the ’04 car lap the track by itself with the F-1 team test driver. The speed this car could attain on the track was incredible!…and that sound!!! 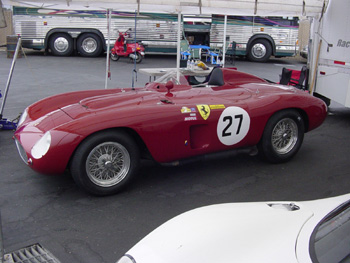 The nice thing about the Monterey Historic Races is the pit access for general admission tickets. Anyone who buys a ticket has full access to all the cars and drivers, and it allows all us gear heads to get up real close! 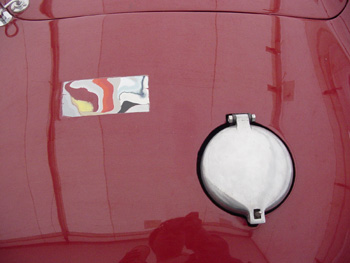 I spotted this neat feature on this race Ferrari showing all the various colors the car was painted throughout its career. I commend them for trying to preserve this little piece of the car’s history! 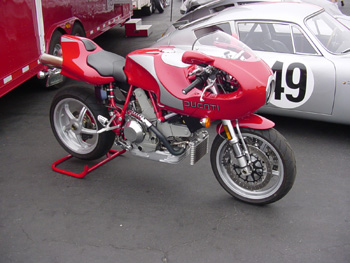 The Monterey Historics also attracts all things mechanical, and I love the variety of machinery parked in the paddock. Although I know almost nothing about motorcycles, I was overwhelmingly drawn to this Ducati. I couldn’t stop staring at it! The artistry in it execution was beautiful. 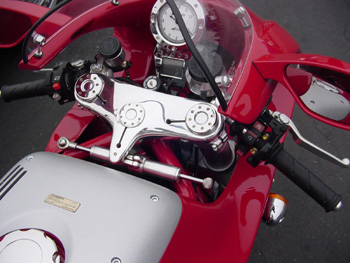 I stood there quietly studying every little detail. It was a visual treat. 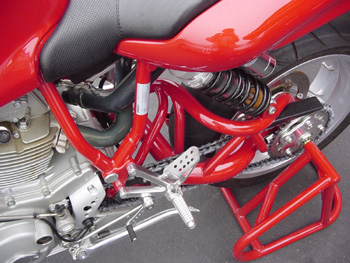 Although everything had a specific function, the design of each piece was very Italian. If I owned this bike, it would make me feel good just looking at it. I can only imagine how it performs.