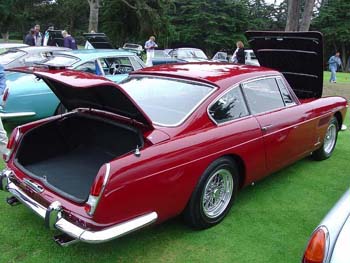 I met a Ferrari owner at  Concorso  in Monterey showing his 250GTE. In our conversation, I found out he was the original owner of the car, and had a great story to tell about how he became the owner of this particular GTE.

In 1963 he walked into a local dealer to buy a Ferrari with his wife. There was a beautiful (used?) two seater for sale that the prospective owner had his eyes on for $14,000. His wife was more interested in the GTE parked next to it because there would be more room for their two small children in the small back seats. Besides, she reasoned, it was a new car, and less expensive. The soon-to-be owner finally gave in to his wife’s power of persuasion, and bought the GTE.

Years later, they still own the car, and have spent many happy moments in their “Family Ferrari.” Not many people can say that three generations have enjoyed the company of an old Ferrari.

Recently, it was decided that the GTE should be restored, and very few expenses were spared. Whenever the wife balked about the expenditures on the car, the owner was always quick to remind her that the two-seat Ferrari that she convinced him NOT to to buy was a 250 GTO. Although GTEs are rising in prices, the 39 GTOs in existence usually command about $10 million dollars or more when one comes up for sale!

We laughed about the story, but I’ve been spending a lot of time thinking about it. I’m convinced this owner had more fun owning this GTE than he would have if he actually bought that GTO. Having real room for four passengers allowed him to share the car with more than one person, and with a family, it almost eliminates leaving anyone home. At the time I bought my 330 America, I hadn’t thought about making room for kids, but now I’m happy I have the extra room if we decide to use the car for my family!

If this owner had bought the GTO, he might have spent the rest of his ownership worrying about its value. GTOs were selling for several thousand dollars in the 70s. They were old worn out race cars needing parts that hadn’t been reproduced yet, so many of them sat languishing. As the prices started to climb in the early 80s, some of these cars were restored, and sold for a nice profit. By the mid 80s, before the stock market crash, GTOs were selling for more than 12 million!  If I had owned this car through all of that, I would have wrestled with the notion of selling all the time. If you sold in the 70s, you would have kicked yourself for selling too soon, if you sold it in the 80s, you would have wondered if you sold it for the right price. Either way, you would have worried about protecting your commodity. I’m not sure how safe I would feel about running down to the store for some ice cream with my 10 million dollar car!