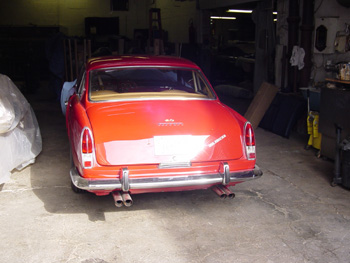 After over a year and a half, it was time for my car to leave East Coast Trim’s shop! It’s been a great experience, and the lessons learned have been invaluable. In nineteen month’s time, I’ve not only completed an interior I can be proud of, but I also was involved with the majority of the work. How many Ferrari owners can say that about their cars? 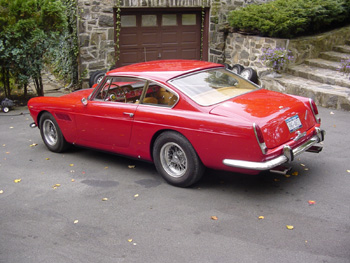 The departure takes my car up to François’ so I can finally install the new tie rod ends I got from Partsource. The hour long drive was uneventful, even though the was steering sloppy on the interstate. 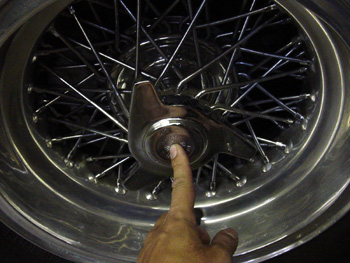 The first order of business was to jack the car up and remove the wheels. For those with concave knock offs, here’s a great tip François showed me a few years ago. After knocking the knock off loose, keep your finger pressed on the center of the knock off while unscrewing it. This will prevent your knock off from falling and damaging itself or the wheel when it reaches the end of the threads.

Another tip on installing the knock off. NEVER, NEVER hammer the knock off when the tire is off the ground. Get the knock off tight, and lower the car on the tires before hammering with any force. When the car is off the ground, hammering on the knock off will transmit the force directly to the wheel bearings, causing small flat spots and shortening the life of the bearings. I was out at Monterey this summer and witnessed a mechanic from a big name shop hammering away at the wheel of a Daytona while it was up in the air, so even the professionals may not know! 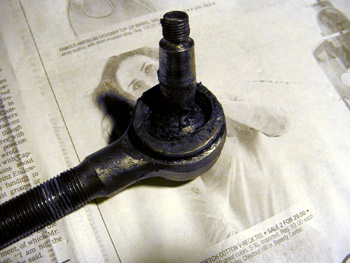 Once we got the tie rods out of the car, it was pretty evident how bad they were. The original bushing material was that horrible crumbly stuff the rear spring eyes were made out of. Once the tie rod end began to wear, the joint would deteriorate rapidly as the ball and socket pounded any bushing material into a fine powder. You can see some of this powder mixed in with the grease in this picture. 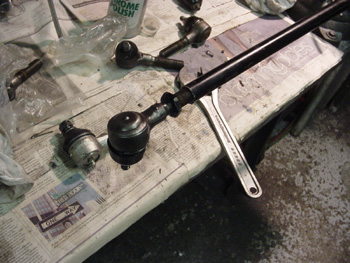 Before I removed the ends, I carefully wrote down the distances between the center of the end, and the flats of the jamb nut. Once these measurements were noted, I took the old ends off and replaced them with the corresponding end with the correct left or right thread. We also greased the insides of the rods so the next person who replaces these tie rods won’t have any problems with seized threads. 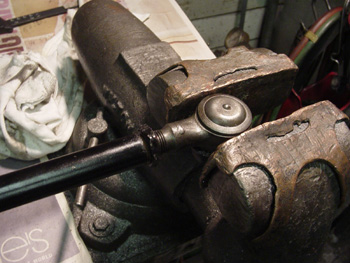 Speaking of seized threads, some of them required a little extra persuasion, but we managed to get them all out.

The new ends came with greaseable joints, so they should outlast my ownership of the car. 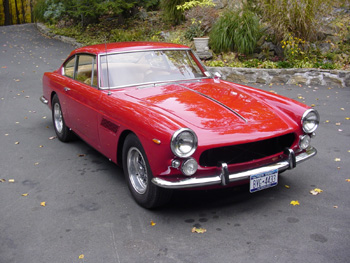 With the new tie rod ends installed, the Ferrari drove more car-like than boat-like! We tweaked the steering box as well until the end play felt just right, so now the car feels great. I have a lot more confidence in the turns, because I don’t have to wait until the steering catches up with my inputs. Now I’m ready for some driving!

As you can see from the picture, I still need to work on the grille. One of the other things on my list of to-dos is to buy new tires. The ones I bought a few years ago are too wide, and are rubbing on the fenders. I’m tempted to drive the car some more before I spend a day changing out the tires, but eventually it will have to be done. 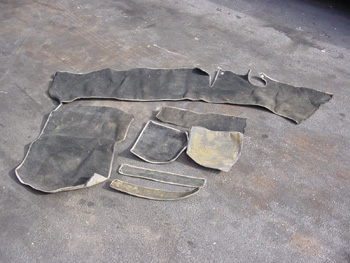 As I was packing up to leave Frank’s, I found a box containing my original trunk carpeting. Some of it is not in bad shape, so I may try to reuse it. This square weave carpet is not cheap here in the U.S., so I’m going to see what I can save. It looks like I’ll have plenty of projects to keep me busy through the long winter!