Ferrari During the Week

I didn’t make it up to my house this weekend, so I didn’t get to work on the car, but that doesn’t mean I wasn’t involved with Ferraris this week. The nice thing about running this website is I am always up to something with Ferraris. Here are some of the things I was doing.

I had correspondence with several Dino owners this past week. Although my website deals mostly with Vintage V-12 cars, I know I attract a fair amount of Dino owners. It’s just weird how all this Dino action happened in the same week.

One owner was talking to me about a glove box door I’m going to try to help him make. I’ve shown pictures of the door I’m trying to copy in a previous post, but we’ve been trying to find the right hardware for the latch assembly. We haven’t had much luck, but I’m sure we we’ll make something work.

From my notes on the other Dino, I created a template for the new glove box door. I’ll be sending this template to the owner so he can make sure the profile will fit his car. As with any Ferrari, the hand built nature of these cars warrants trial fitting.

A second Dino owner contacted me looking for someone to help resurrect his car from a long storage. Although François Sicard, the restorer that helped me with my car, and taught me most of what I know about Ferraris, works mainly on V-12 cars, he occasionally can be convinced to take on another Dino. When I called him to ask if he was free to look at this guy’s Dino, he clarified by saying “Non, I will work on Dino…Eeet is 328s or newer I don’ touch!”

The Frenchman’s statement reminded me of the last 328 he had at his shop. François was doing a simple tune up for the car when  the Digiplex ignition box decided to quit working. Instead of returning the car to the customer after a few hours of work, François spent days trying to figure out what was wrong, waiting for parts to arrive, and generally cursing out “dat piece of sheet!” After that experience, he swore off the later cars. The good thing is with the back log of work François has with the older cars, he can finish out his career and not touch a newer car!

Several other Dino owners were contacting me after rumors surfaced that I was in possession of a Owners manual and pouch on Ferrarichat.com The rumors were true, but I had not spent a lot of time thinking of what I wanted for it. I’m sure the several owners that contacted me would love to get a good price on it, but I think it’s only fair to sell it on e-bay. I’ll let everyone know when I list it. 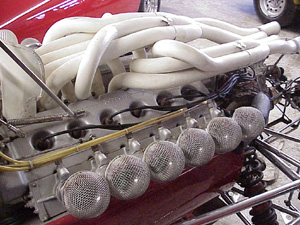 I received an interesting e-mail a couple of weeks ago from a model maker who was interested in some pictures I took of a Ferrari 312 F-1 car that was at François’ shop a few years ago. He wants to build a scale model of one of these cars and was looking for detailed pictures to build his model. Having taken many pictures of this particular car, he asked if I was interested in sharing these photographs with him. Happy to help another enthusiast, I traded him my pictures for a few he had taken out at the Ferrari event in Laguna Seca this past year. 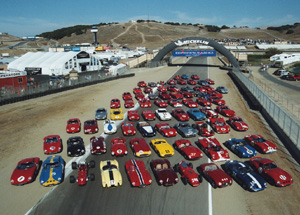 In the mail this week, I got a nice 8X10 of this picture showing all the significant Ferraris in attendance. It’ll make a nice picture to frame in my garage!

Al, from http://www.seamsperfect.ca/ is sending me another carpet sample for my trunk carpet this week. He’s been on a quest for a cheaper square weave carpet than what Re-Originals has to offer. Although Al stocks square weave carpeting, it is not the same tightly woven carpet found in Vintage Ferraris. This sample may be the last option before I have to pay the hefty price to Re-Originals. That’s also provided they still have some!

Speaking of finding cheaper items for Vintage Ferraris, I’m also working on getting some original OEM Cheney hose clamps from a fellow Ferrari owner. He’s found a stock of NOS clamps, and is offering them up for sale to viewers of this website. I’m waiting for pictures, but if they are what he describes, they will make a nice finishing touch to any of our engine compartments. I’ll let everyone know when we have availability, and pricing.

There were a couple of other Ferrari related conversations, but those I’ll have to keep confidential. The rest of the week was scattered with a couple of website issues that had me scrambling to fix. Thankfully, I have Josh, a fellow website visitor to consult and help me whenever my abilities fall short of webmaster! So there you have it, an average week of Ferrari things. Hopefully, next week will have “real” work I can talk about!