The Cure for the Winter Doldrums

The weather in New York is cold again, and any hopes of Spring arriving early are dashed. It’s been hard for me to get inspired to work on the car when the garage is a chilly 50 degrees, so I was looking for any excuse to do something different. After a couple of phone calls to my Ferrari friends in NY, I found the perfect activity to spend a Saturday. Yale was driving his Series I 330 GT 2+2 up to Connecticut to visit Michael and his 330 America. After inviting myself along for the ride, I grabbed my camera and headed across town to catch my ride.

I arrived in Greenwich Village where Yale sat idling in the Ferrari. I jumped in, and we headed up the West Side Highway, but before long, we noticed wisps of smoke emanating from the engine compartment. Yale worried a similar problem was happening again when brake fluid got sucked into the booster and drained one of his reservoirs. Realizing our trip may be curtailed, I started weighing our options.

Since François could not duplicate Yale’s previous problem, we decided it was a fluke, and would have to get worse before we could address it. If the problem was happening again today, we would have to get some brake fluid, and look for fluid draining from the reservoirs. The only problem was we were in the Manhattan, and for a city where you can buy almost anything, auto parts are not at the top of the list. We racked our brains for where the nearest store could be, and Yale remembered one about a mile south, so we turned around.

When we pulled over, and popped the hood, we found both brake reservoirs full, and no signs of leaking, but once the hood was up, we noticed the wisps of smoke were coming from the radiator. I couldn’t find exactly where the coolant was coming from, but could see wherever it was, it was a minor leak, only allowing a small amount of coolant to escape from the radiator. I suspected Yale had pinhole leak or crack, and felt we could push on. Since we could buy some coolant, and it was such a cold day, the risks of overheating were at a minimum. I kept the possibility of the radiator cracking open or leaking much worse through the course of the day to myself, and assured Yale we would be fine. 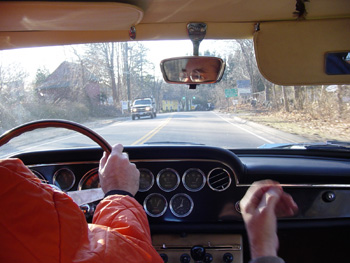 We arrived at Michael’s house in Connecticut about lunchtime without any incident, or reason to refill the radiator. Seeing us pull up in Yale’s 330 on such a nice, albeit brisk, day inspired Michael to fire up his 330 America to take us out to lunch.

Michael’s car fired right up, and sounded great. Checking to see everything was in order, we took a look at the engine compartment while she was running. We immediately saw the center carburetor dripping fuel on the intake manifold. I asked Michael if he had a plastic faced hammer, and we tapped the float chamber on both sides of the carb. The dripping almost stopped instantly, and we were on our way to lunch. Taking this as a sign, I asked Michael to locate his fire extinguisher, and to check its level. I’ve found that this procedure almost insures nothing will happen!

The three of us took turns driving the car, comparing notes and experiences, not something you guys with the two seaters can do! 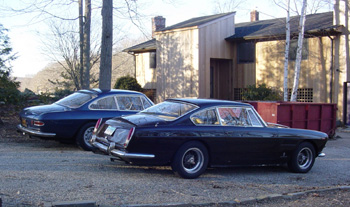 Here are the two cars out in the sun for a brief day before returning to their winter sleep. Snow is in the forecast, so it may be several weeks before we can do something like this again, but I was lucky to have a day like this with friends, food, and Ferraris.