One thing that is lacking on the Internet is a comparison of available exhausts regarding their sound. Each manufacturer will claim they copied an original Ferrari exhaust system, but the proof of their success comes ultimately in their sound. Before we get to listening, let’s review what I’ve learned about exhausts.

I installed a Stebro exhaust system on my car because their price was lower than Timevalve, and they helped me fabricate some pipes that were missing on my car. They are based in Canada, and manufacture their pipes out of 409 stainless, and their mufflers out of 304 alloy. Both alloys are considered “stainless steel,” however, 409 has known to discolor with age. Since a Ferrari Exhaust is painted black, I didn’t find anything objectionable to the discoloration as long as it didn’t rust like the original mild steel exhaust.

Time valve is another stainless steel exhaust system that’s available, but they’re a little more expensive. They use 304 stainless for all their pipes and cans, and even offer installation if you’re local to their Eastern Connecticut location. Yale and I drove his 330 GT 2+2 to the shop to have them do the installation. You can read about it here.

A third system that is sporadically available is an Ansa system. They are occasionally available from Ferrari parts vendors, but supplies are limited, and unreliable. If you know of a reliable source, please let me know. These Ansa systems are generally OEM (Original Equipment Manufacturer) exhausts, and are made from mild steel. The short distances traveled, and long storage times for a Vintage Ferrari don’t mix well with plain steel exhaust systems, so their longevity may vary. The cost of these perishable systems often come very close to their stainless steel sisters.

I understand Tubi also has Vintage Ferrari Exhausts in their catalog, but their prices have probably scared away most potential buyers. They probably have the most experience tuning the sound of their systems, but I have not seen one installed on a Vintage Ferrari. If you own one of these systems, and would like to be included in this comparison, please contact me.

The first system we’re going to hear is supposed to be an Ansa system. Although I doubt it is a 40 year old original system, it looks like most of it was preserved or repaired. There are a lot of deep tones at the rear of the car, and is about the right sound I would suspect from a Vintage Ferrari. 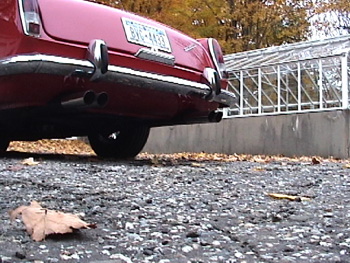 The next exhaust is from my Stebro System. It has been described as deeper than stock with a “blub, blub, blub” sound from the tail pipes. Some people say that it has too much of a “hot rod” sound for a Ferrari, but now that I’ve had a chance to hear it next to an Ansa system, it doesn’t sound too bad. There are more lower frequencies, but there are far more similarities than differences. 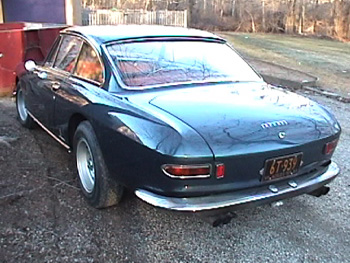 The final exhaust we’re going to hear is from Yale’s 330GT 2+2. This is the Timevalve system. Some people claim this system is too quiet when compared to the stock system, but from inside the car, you hear more of the deeper tones. I believe it is noticeably quieter from the rear, especially in the deeper tones, but still representing the right tones for a V-12 engine.

I’d like to make a final point on these exhaust systems, if you’ll excuse me on this technical crap! These sounds were all recorded with the same stereo microphone, on the same video camcorder, standing approximately the same distance from the rear of the car. The audio portion of this video clip was extracted, converted into a CD quality file, and then converted to a MP3 file. If you want to make accurate comparisons of these samples to other exhausts, you should use a similar equipment. I’ve seen other people on the internet using video clips to sell their exhaust systems, but I don’t think this is an accurate method. The compression algorithms they use for video clips is too severe to accurately reproduce sound unless you know what you’re doing.