I got a call a week ago from a fellow Ferrari owner in need of a favor. My friend Fred wanted to pick up a friend’s 308GTS in Florida, drive it up to NY, and was looking for a co-pilot. The quickest way between these two states would be up I-95, a boring four lane highway with very few curves, accented with truck stops, and convenience stores with clogged toilets. Normally, I would pass on an opportunity like this, but the challenge of getting a 20 year old Ferrari to go 1300 miles in one shot could be fun. Ferrari owners are always accused of not driving their cars because of their reliability, and this was a chance to see if we could do it in a 308. 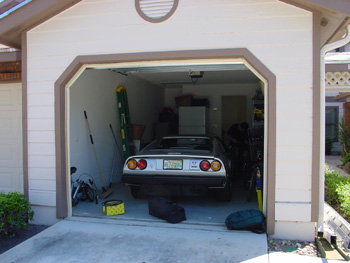 As much as I would have liked to bask in the Florida sun over freezing in bone chilling NY, I could only spare the time to do the drive, so we caught a flight at 7 am Saturday morning with plans to be back in less than 30 hours. Arriving in Florida, we took a cab to Bobby’s house and found his 1981 308GTS waiting and ready for our trip.

A 308 is a mid engine car, so the trunk sits aft of the engine compartment under a zipped up cover with just enough room for a medium sized duffle bag and a knapsack. Luckily that was exactly what we had brought, so nothing needed to be left behind. I checked to see what kind of tools we had, but really wondered what we could actually fix on the side of the interstate!

After running some errands in Miami, we hit the road at about 2:30pm. The plan was to stop in Savannah GA to visit my sister and brother-in-law to grab some dinner. Unfortunately with our late start, we had some time to make up. The car was running well in the 80 degree weather, so as the traffic cleared outside of West Palm Beach, we motored along a little past the speed limit. The top was off, the sky was clear, and the car was purring, Life was good. 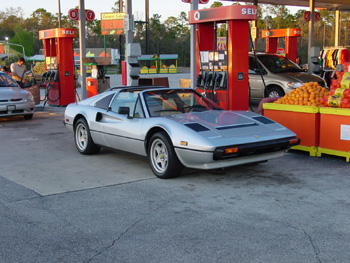 Our first stop for gas gave me a chance to take a closer look at this car. With 30K showing on the odometer, this car was very clean and original. The Silver/tan color combination was perfect for the Florida climate, and probably better for trying to hide from the highway patrol. Red Ferraris stick out in traffic, and I always prefer something a little subtler. 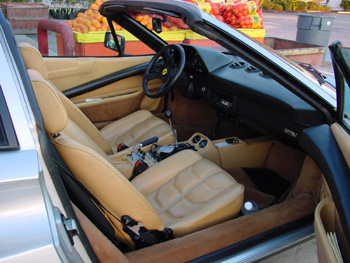 Driving this car was a joy. The stock exhaust system sounded great, and turned heads wherever it went. It was kind of fun to drive up next to a hopped up Import with a sewer pipe exhaust sticking out back, only to sound much better. The exhaust timing of the Ferrari V-8 through the tuned exhaust makes for a sound that just can’t be copied by a four cylinder motor.

As we made good time on the highway, I got aquatinted with the car. First thing I noticed was how close the pedals were. The mid engine layout of the car pushes the passenger compartment forward, so to avoid the front wheel wells, the foot boxes stretch towards the center of the car. Without narrow shoes, the limited space for the pedals really makes driving a manual transmission impossible. Luckily my shoes were just narrow enough for the job, but it still took some care not to step on two pedals at the same time. The rest of my fit to the car was fine. All the driving controls were close and comfortable to reach, and the seats were snug, but comfortable. Forward visibility was excellent, but the view out back left a lot to be desired. The rear sail panels blocked all 3/4 rear views, leaving huge blind spots. The gun slot rear window was no better, giving you just enough of a look out of the mirror to make out the grille of the car behind you. I’m sure in the mind of the designers, there was not much concern for who was behind you anyway. After all, this car was meant for fast driving, with all the need for a good forward view!

By the time Ferrari built the 308 Quattrovalve, a certain amount of refinement was achieved with the 3 liter power plant. The carburetors that gave the early cars their raw characteristics were replaced with fuel injection, and each cylinder breathed with four valves per cylinder. Some people prefer the sound of the carbs, along with the occasional chuff and pop, but with this car’s fuel injection, she never skipped a beat. Starting the engine in 80 or 20 degree temps made no difference in our drive, and inspired confidence in our trip. Power from these small displacement engines come in much higher up the rev range, so you’ll find yourself pushing the pedal down hard looking for more acceleration. This 308 accelerated smartly, and the clutch take up was smooth and easy. I never stalled it once, which I was expecting with such a small engine and high strung reputation. Instead, I found a very easy car to drive. It didn’t complain around town in the 2500-3500 rev range, and could speed away sharply as long as you put her in the right gear. On the highway we cruised at about 80 in top gear without much sweat. The tachometer showed about 4500 rpm, which seemed high for cruising, but the engine was so smooth, no vibration was felt in the shifter or steering wheel. 80-100 could be done in top gear pretty quickly, or a downshift could do it with a lot more drama. The power was not explosive, but you could feel the engine pressing you into the seat. One of the added bonuses was we did a lot of this high speed driving with the hard shell roof off of the car. At 90 miles an hour, it was bearable, but then again, it’s been a long winter, and there there was no way I was going to drive with the top on!

We rolled into Savannah 5 hours later to a hot meal and real bathroom at my sister’s house. A home cooked meal was such a treat after a day of eating food wrapped in plastic. After dessert, we traded a drive in the Ferrari for a chance to drive my sister’s new Corvette. As the C-6 pulled out of the garage, I chuckled at how many lines I could see taken off a modern Ferrari. Driving this 400 hp monster was so much fun, and my only regret was we didn’t have more time to try it out, but we still had several hundred miles of driving to do! Thanks for the hospitality Linda and Roger! 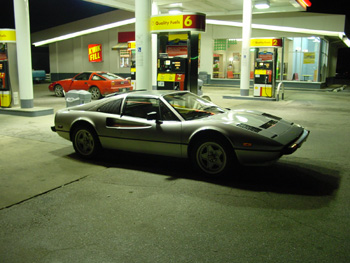 At about midnight, Fred and I found ourselves trading the wheel every 90 minutes. The featureless road in the Carolinas was putting us both to sleep. By this point, whenever I wasn’t driving, I managed to find a position to fall asleep. With the targa top back on the roof of the car, there was a little more room behind the seats, so I found if you slid the seat forward a couple of notches, you could actually recline the seat enough to get comfortable. 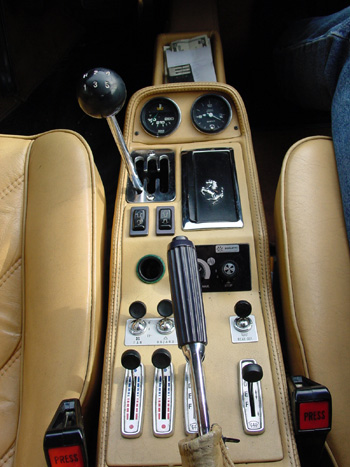 As the trip wore on, I also started to notice all the little quirks of the car. Take for instance the center console of the car. In classic Ferrari fashion, the switches and controls are stuck on haphazardly. Nothing is labeled well, and without an owner’s manual, good luck trying to get some fresh air into the car! On a positive note, however, the clock worked! 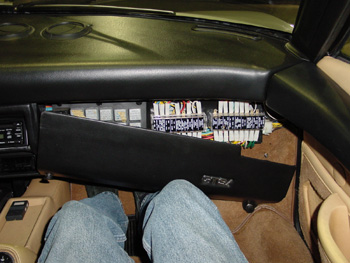 With every mile we traveled, the cockpit seemed to get smaller. It didn’t help that as we traveled north, the climate got colder, so the roof had to go back on. What started out as a beautiful warm Florida day turned into a cold frost filled night. In that night, the fuse panel decided to expose itself. No amount of fiddling with the two attachment knobs would get the cover to stay in place for long. It was often with every driver change, the passenger’s task was to get this panel back in place.

If having a loose fuse panel was the worst thing on this trip I would take it, but soon the fuel gauge started to act erratic. With a fresh full tank of gas, the needle started bouncing all over the place. Thinking it had something to do with the loose fuse panel, I checked to see if any of the fuses had worked loose, but everything seemed fine. Neither one of us wanted to speak out loud of our fears of things to come. Could this be the beginning of the end? Did our luck run out? Was it not possible to take a Ferrari such a long distance without incident? As these questions went through my mind, both of us kept silent in the car.

On our next stop for fuel, I held open the engine cover (show me 308 with good gas struts) as Fred reached down to check the fuel tank sending unit plugs. Not wanting to break anything, he pushed down on the connectors to see if it would help make a better connection. Getting back into the car, we checked the gauge, and things were back to normal! 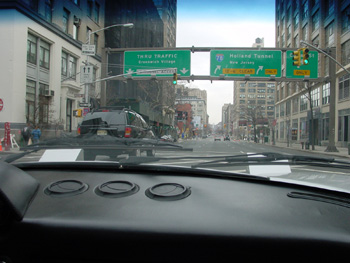 Once we got north of Washington D.C., we knew we were in towing distance! We figured with our two Gold auto club cards, we could get the car to NY, but they weren’t needed. Soon we were in NYC without any incident. 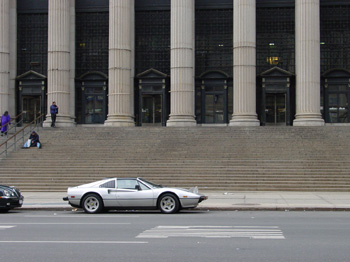 Parked in front of the Main Post Office on 34th street, I got out so Fred could continue north to deliver the car. I was sad because Bobby, the owner of this car, is selling her for another Ferrari. She served us well on this trip, never letting us down, and I didn’t want to see her go. 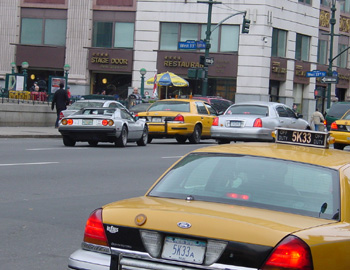 As I watched Fred pull away, I waved good-bye to the little Ferrari. Who knows who will end up with her next, but I know I can look back and say I drove 1300 miles straight in a Ferrari without one breakdown!