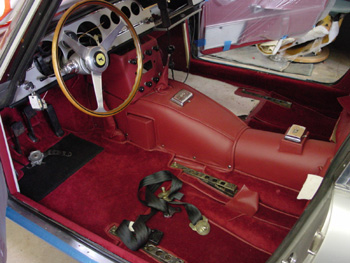 I stopped by Frank Segreto’s shop today to see how he was coming along with some Ferrari interiors. Scott Garvey’s silver Series I GTE is coming along nicely. Frank has made great progress with the carpeting and center tunnel. 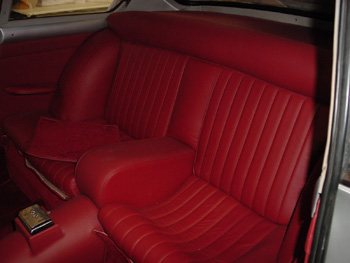 The rear seats are all done, and only the rear carpeting needs to be trimmed and tucked into place. It seems like in just a blink of an eye, Frank completed this interior compared to how much time I took with mine, but then again, he works out of his shop almost seven days a week, while I only got one day a week for my car! It’s amazing how much work you can get done as a full time job! 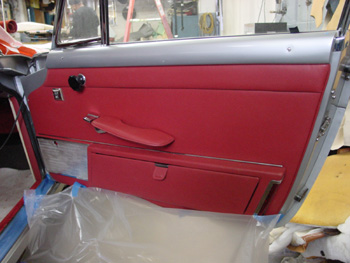 Frank even got the door panels trimmed and finished. The only things left to do are the front seats, and the final detailing. This car is going to be another nice interior to come out of East Coast Trim. 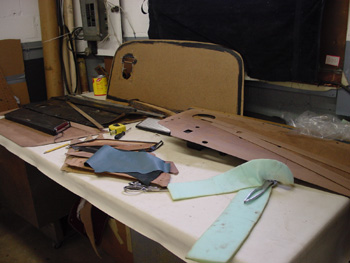 Always busy with work, Frank has started on another Ferrari 2+2. It’s Steve Patti’s 330 America. Steve is in Texas, but has decided to have Frank do his interior. All the bits were shipped to Frank, and he’ll put a new interior together for Steve to install in his car. The door panels have already been taken apart, and examined for restoration. Although the interior is dyed black, its original color was a dark blue color. Steve wanted to return the car to its factory original color, so great pains were had in finding a proper match. Since Connolly hides are no longer available, original undyed samples had to be found, sent out for matching, and made to order. A swatch of the new leather can be seen in the center of this picture. 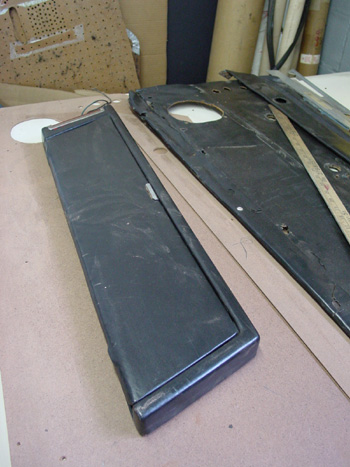 Frank and I took a close look at the door pockets and discussed a foreseeable problem. 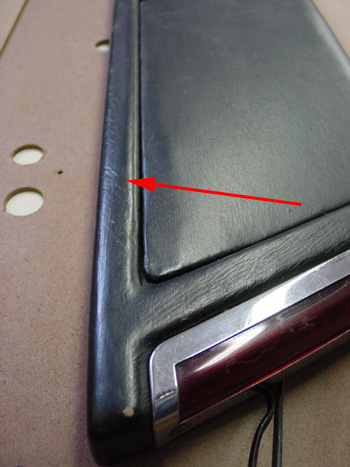 Since Steve’s car is just like my 330 America, it seems to suffer the same problem as most Series III GTEs and 330 Americas. There is not enough clearance between the door pockets and the seats when the doors are closed. This interference causes the phillips head screws in the seat backs to scuff the door pockets. With this newly dyed black interior, you can barely see the scuffs, but they are present, and are already appearing on my newly restored interior. It’s a shame to have these scratches in my new interior, but we would love to eliminate this problem in Steve’s car if it’s possible. Using the thinnest door panel material can help, but Frank and I are trying to come up with solutions before there is a problem!

François says it’s a problem with many GTEs and there is not an easy solution. I’d be curious if anyone has a Series III car without scuffs on their door panels. I know Scott’s Series I car has no scuffs, but François has seen those cars with scratches as well. Let me know what you have.