I’ve been plagued with my overdrive not working ever since I got the car back on the road. I know the actual unit works from when I hot wired the overdrive while taking it for a test drive over a year ago. I’ve concluded that the problem lies with the electrics, but figuring it out has been no easy task without any true results! I thought finding a bad Lucas Solenoid was the key to my problem, but after replacing it with a much more reliable Hella unit given to me by a fellow Ferrari owner, I still couldn’t make the system work! 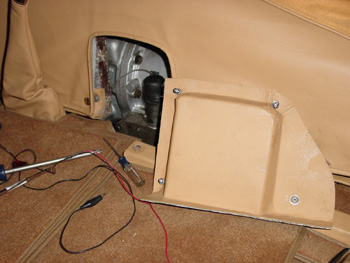 One of the problems with trying to figure out the overdrive is the difficulty in testing it out. All the wiring is under the transmission tunnel, and that will not come out without first removing the front seats. I can check for live circuits with the ignition on, and the proper levers thrown, but for a final test, the car needs to be driven. This test drive requires most of interior to be put back together. I’ve actually seen François drive one of these cars without the transmission tunnel, but I’m too chicken to drive my car like that with the drive shaft spinning right near my elbow! I also stand the risk of slinging road dirt and oil on my new leather seats! A cover plate on the transmission tunnel makes things a little easier, but it only allows access to one part of the overdrive circuit. 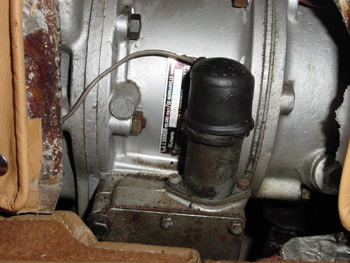 The Solenoid is pictured here and operates a plunger that engages the overdrive. I’m taking this picture simply to show an original Lucas rubber boot that waterproofs the Solenoid. Most of these have rotted away long ago, but I managed to find one that was in pretty good shape. Too bad I can’t show this part off in Concours judging! (I’m joking) 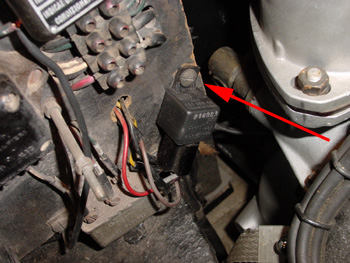 Not knowing what else to do, I felt one of the only ways to get this overdrive to work was to replace ALL the wiring in the overdrive circuit. As I began to look at the routing of the wires, I noticed something wrong with the Hella relay I installed a while back. A ground wire that plugs to the relay is screwed to the relay mounting screw, but checking for continuity, the ground was intermittent. Looking at the back of the fuse panel, I could see there was a fair amount of rust where the screw attached. Could a bad ground be causing my problem? I cleaned all the contact points as well as I could, and screwed everything back together. Now it was time for a test drive. 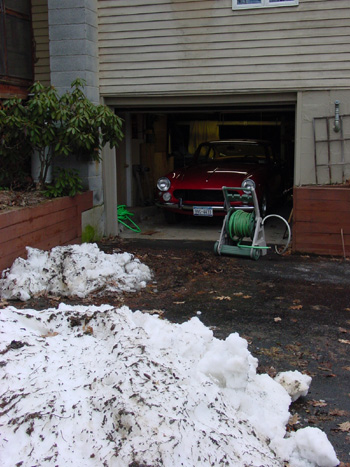 It had been raining pretty heavily, so I was hoping that an overnight of rain would melt most of the snow blocking my exit. I woke in the morning to find a pile of snow still there for me to shovel, but it seemed to have stop raining.  I got the shovel and hoe out and began chipping, breaking and shoveling the snow out of the way. Just as I cleared what seemed enough room for the car to get out, it began raining again! Normally, I would have not cared, but without a working windshield wiper motor, I was tempting disaster. The skies must have known my decision, because it seemed only to rain even harder! So we’ll just have to wait some more to sort this overdrive out!