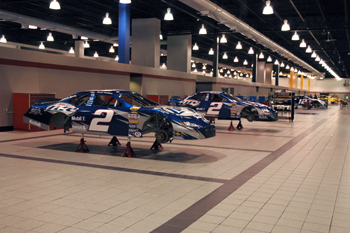 On my visit to Mooresville, North Carolina, Tom Farrell was nice enough to show me his shop, and Ferrari 250GTE, but he also took the afternoon off to show me where he works. In a 500,000 square foot facility, Tom works for Penske Racing in their model shop fabricating scale models for testing in their wind tunnel. As I was escorted into the main part of the building, I was overwhelmed by the size of the space! A half million square feet of interior space is impressive. There is even enough space in their wash bay to clean their tractor trailers! 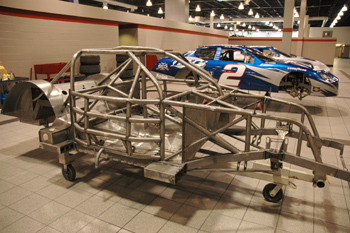 Along the whole length of the building are “smaller” shops where they build and repair the frames, fabricate the bodies, and create models for wind tunnel testing. The number “2” car you see in these pictures belong to Rusty Wallace which is campaigned in the Winston Cup series. 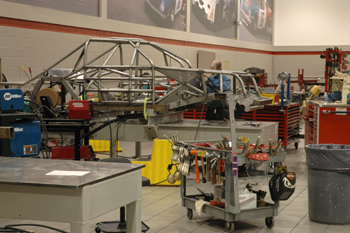 Each chassis that is built and raced can be serviced, repaired, and modified in these shops. Tom allowed me some close access to these shops and showed me some pretty neat things as long as I didn’t take any pictures of the details. 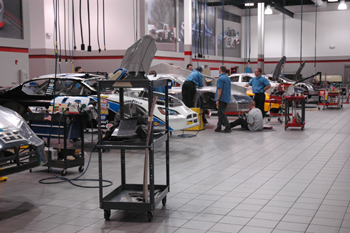 As in any racing, the secrets kept in these facilities can often win races over the competition, so people can get uptight when they see cameras. In fact, just as we were finishing up, Tom and I ran into the shop manager escorting Roger Penske to one of the side shops! The manager sternly asked what we were doing, and why I was taking pictures. Tom seemed to take it all in stride, and assured his boss I hadn’t taken any pictures of confidential nature. I introduced myself to the manager, as Mr. Penske came over and shook our hands. Penske seemed fine with us being there, and Tom explained it was only his boss doing his job in front of the big boss! I just hope Tom doesn’t get in trouble for my little tour!

After touring Penske South, and averting Tom’s dismissal (I hope), we headed over to Penske’s scale wind tunnel facility. There, Tom showed me how they set up their scale models for wind tunnel testing. Unfortunately, no pictures were allowed, but the knowledge I gained about how they test their cars was facinating. I was able to crawl around the perimeter of the wind tunnel and see how the rolling road mechanism worked, and even watch them mount a car to the test bed. I’m always amazed at how much engineering goes into racing these days where the average fan has no idea, especially in a race series like NASCAR where technology is supposed to be limited. I just consider myself lucky to have had this chance to see some of it! Thanks Tom!