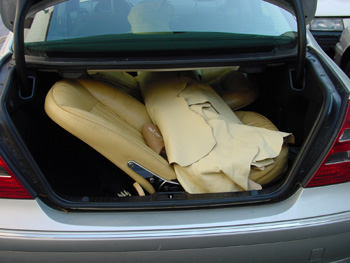 I stopped by East Coast Trim to pick up a pair of seats and some leather for Michael Greenspan. Originally, Frank was going to reupholster the seats to his 330 America, and eventually redo the whole interior, but since his heart attack, he’s going to have to cut back in the amount of work he can do. I am happy to announce Frank was released from the hospital today, and is home resting. 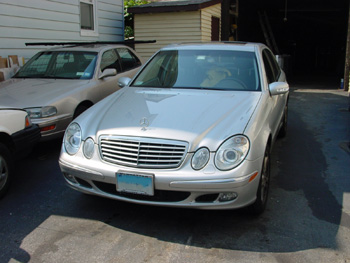 Michael has found another shop in the area that will do the interior, and since I was stopping by to see Frank, I helped pick up the leather and front seats. Since Michael was transporting the seats to the other shop, it made sense for me to borrow Michael’s car and load these seats once.

The ride was a Mercedes E500 with all the bells and whistles a modern car can have. Getting in it and driving wasn’t too difficult, but figuring out some of the features took a little work. Somehow, the transmission was put in manual mode when I noticed the gears dragging at the first stop light. Trying to keep the car moving in Manhattan traffic, I manually shifted the automatic transmission up through the gears until I could search how to put her in automatic. Finally, I found the switch that toggled the display in the dash that read: “Sport 1” (nope, didn’t want it), “Sport 2” (Nope, still too much work), and finally “Automatic” (Perfect! Mindless NYC traffic mode!).

The V-8 in this car was smooth and powerful. I know these are heavy cars, but I was impressed with how light she felt. I’m sure a whole host of computers, hydraulics, vacuum pumps, and relays made this ride all possible. In fact, as I got out of the city and reached the Saw Mill Parkway, I was startled by the “Dynamic Seats!”

The “Saw Mill” is a fun twisty bit of road that is often congested with terrified drivers unfamiliar with following a curvy road at moderate speed. Luckily for me, mid-day and mid week traffic was light, so the Mercedes was able to stretch its legs a bit. On the first curve, I felt something push my kidney. On the immediate opposite curve, I felt a similar push in the other kidney. “What the…?!” I thought. “You’ve got to be kidding me!” Evidently I guessed, this car had some kind of mechanism that pumps up the side bolsters in the seats to counter act your body from sliding in the seat! It’s tied into the main computer that sensed g-loading, and told the seat how much to push out the bolster. The harder you cornered, the further out the bolster pushed into your side.

The first thing that came to my mind was how long would this last before one mechanism fails in the chain making this whole operation annoying. Imagine taking this car back to the dealer because it only worked in left turns? The second thought was the seats seemed to be more distracting than helpful. I didn’t need a harder push in my back to remind me I was cornering hard. There also really isn’t any cornering on public roads that would cause you to slide out of your seat (especially one designed to fit well), so why even have it? I’m sure there are people out there who love this option, but I guess it’s not for me. I wonder what other options I’ve missed from the automotive world of late?