Carmel, and the Tomyang.net Party 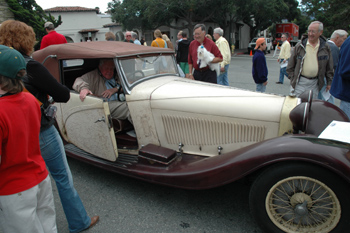 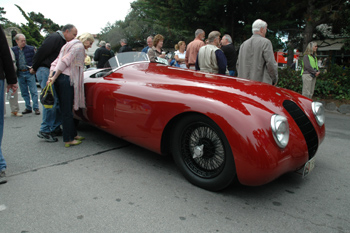 On Thursday, after looking at the cars at the RM auction, I headed over to Carmel. The Pebble Beach Concours D’elegance has a tour for the entrants. It’s a chance for the public to see the cars if they do not attend the event on Sunday, and a chance for the owners to gain extra judging points if there is a tie between cars in their class. 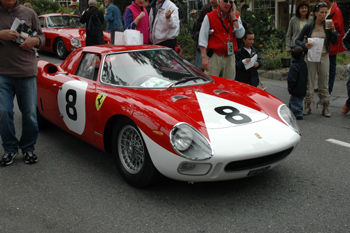 As the cars drove down Ocean Avenue in Carmel, the street became alive with spectators and enthusiasts. The sound of the various cars reverberating down this quaint main street was great. How often do you get to hear a 250LM burbling past on a public street? 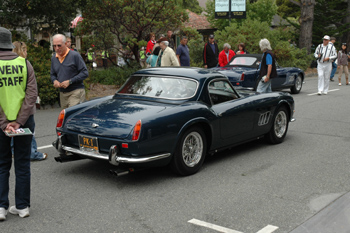 Parked among the Ferraris was this pair of 250 California Spyders. To the Ferrari knowledgeable, the difference between the two cars was the length of their wheel bases, but to the public, they looked the same. In the world of high end car shows, this situation was kind of like when two women wear the same dress to a function. Both are proud of how they look, but can not avoid being compared.

The 250SWB (short wheel base) California Spyder belongs to fellow New Yorker Peter Kalikow. In fact, I showed the hard top to this car being fitted at “The Panel Shop” a few months ago! The complete restoration was done by David Carte of Virginia. The 250LWB (long wheel base) Cal Spyder was restored by Bob Smith of Coachworks in Texas. It was fun to know all the players involved in owning or working on these two cars and even better not having to choose sides, as I could sense the intensity of the competition!

For lunch, I was invited to a luncheon hosted by “The Ocean Ave. Motor Club,” sponsored by Louis Vuitton. I don’t know how I got on the guest list, but I guess someone is a fan of my site, so I was honored to attend. Thank you Doug and Genie Freedman for inviting me! 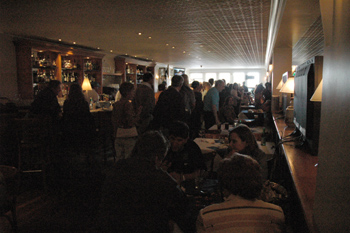 The food and drink was good and plentiful, and it was fun to spot the automotive celebrities in the crowd. I was pleasantly surprised to see many people I knew, and spent a lot of time mingling instead of eating! 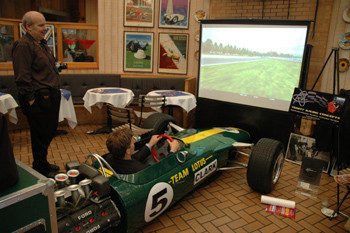 They had a couple of race car simulators that I wished I had tried out, but was too busy chatting. I figured I could always drive one of these things in the future, but speaking to people I get to see once a year was far more important. 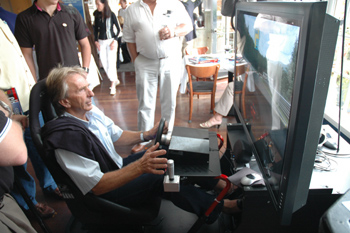 Derrick Bell was seen piloting one of these simulators being goaded by the spectators. Seeing him crash made me feel better about not embarrassing myself. I know that as advanced as these things have become, they still don’t feel like the real thing, so I could only imagine how poorly I would have done!

A highlight to my afternoon happened after I met François Sicard and his wife Pam at this event. It was nice to catch up in person as I have not had much of a chance to see them in CT with my busy schedule, but as I was talking to a friend, a gentleman walked up to François and started chatting. Within a few minutes, I overheard the man say, “That’s him?…Tom Yang?”

François introduced the man and his wife as Jim and Sandy McNeil of NY. Jim enthusiastically explained how much he liked my website, and how he checks it all the time. His wife added that Jim didn’t go on the computer except to check tomyang.net! I was flattered by the compliment, and knew that it was fans like them that motivates me to do what I do. I asked Jim what brought him to my website, and he explained he has owned Ferraris for a long time, and they own a GTO.

Without many words to follow all this information, I told the couple that I should be the one honored to meet them instead of Jim being happy to meet me! From there we talked all about the car, and the experience of driving such a great icon of sports car racing. It turned out that they brought out a 289 Competition Cobra for the Monterey Historics instead of the GTO because the Ferrari was out last year with all her sister cars. I was invited to look for them at the track as we left the luncheon….WOW!

Looking at the time, I found much of the afternoon had disappeared, and it was time to get back to Monterey and prepare for the TOMYANG.NET party. I got the “breakfast room” opened at the Mariposa Inn on Munras courtesy of the Lamborghini Club. Tom Shaughnessy is a member, and got permission to use the room since many of the Lambo owners stay at the Mariposa.

As I waited for people to arrive, I found myself surrounded by Lamborghini owners. Scrutinizing my tomyang.net sign, they asked what I was doing. I assured them that people would show up for my party, and hoped I wouldn’t be made a liar. Luckily, shortly after 6pm, the first Ferrari owner arrived, and a steady stream of reinforcements followed. Soon, we had dozens of guys and gals meeting to share in the enthusiasm of Ferrari ownership. By the time Tom Shaughnessy arrived at about 8:30pm, there was easily 30 people in attendance. Tom felt the party was a success, but immediately asked if I had anyone to help clean the room. I assured him that I would leave the room as I found it, and not expect to loose the Lambo club’s hospitality. As I promised Tom, I scanned the room to see beer and wine bottles all over the place, and Parker Hall shelling a bag of peanuts he brought to the party! As others shared in the snacks, salsa, chips, and peanut shells were falling on the floor. All of a sudden I felt I was back in High School throwing a party at my house without my parent’s knowledge!

Here are some pictures of the party taken by Kerry Chesbro.

As the party wound down, I began casually cleaning up.  I found a  broom and a pick-up for the snacks on the floor. Just as I felt I was making good headway cleaning up the floor, I turned to hear a loud crash. Kerry Chesbro (330GT 2+2 Registry) dropped a whole six-pack of beer bottles when the wet bottom of the cardboard holder gave way. As 72 ounces of beer crept its way across the floor between all the broken glass, I stared in disbelief.  Andrew Naber (Runs Ferrari Forum.net ) was nice enough to go to the front desk and return with a mop and squeegee bucket. I filled the bucket with about 2 gallons of soapy water, and Andrew helped wheel it out from the sink to the beer. Halfway there, the bucket’s wheel caught on a tile, flipped over, and dumped all its contents in the kitchenette area. Not believing our luck, I took over and began mopping up the second disaster, before I could start picking up the beer. With my shoes and pant legs soaked with beer, I greeted two late comers to my glamorous party!

I cleaned the room the best I could keeping in mind that any sign of beer left on the floor would be there the next morning as patrons stopped by for their breakfast. I can’t imagine how appealing it could be to eat in a room smelling like a beer hall. I locked the door to the room with the windows open, hoping for the best. If we don’t get this room next year, we may know why.

I got back to my room and crashed. It was a long day, and the weekend had not even begun!