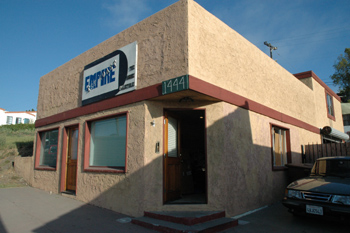 In another non-descript store front, was the second Shaughnessy parts stash. From the front, one would never know that behind this facade, laid a wealth of Vintage Ferrari parts. 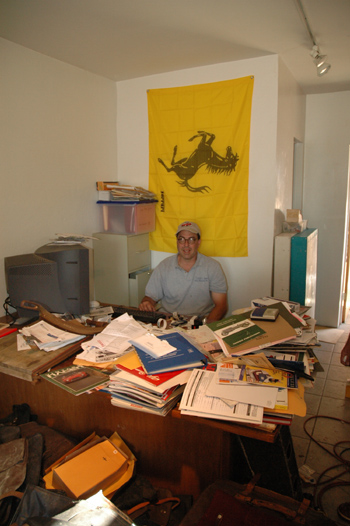 As Tom sat down to check his e-mail, it was just long enough for me to take this shot of him residing over his domain. So the next time you see his name pop up, or “Miuraman” on E-bay, picture him sitting here pecking away at this keyboard. 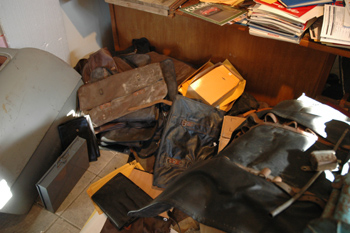 Looking down at the foot of his desk, I found the first of many astonishing sights. Here laid a pile of Vintage Ferrari tool bags! They belonged in 250s, 330s, and 275s. Some were in worse shape than others, but certainly serviceable to an owner without one! When asked, Tom said they’re not for sale! 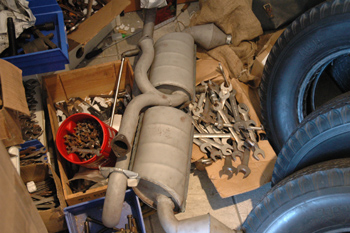 Need tools for that tool bag? Shaughnessy had boxes of wrenches. Some were sorted, but many were tossed in a general pile. The originals seemed to be mixed in with the reproductions, but still worth picking through to create a complete set. 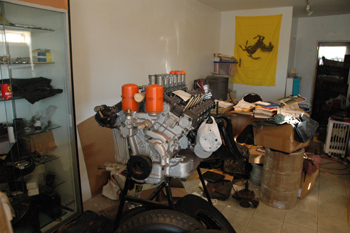 On display, front and center, was the motor for Tom’s Daytona. 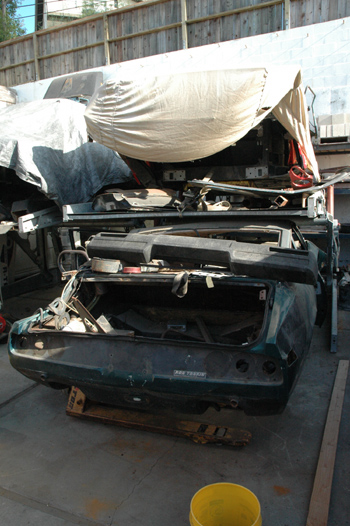 Behind the building were various cars, shells of cars, and body parts. Here’s a 365GTC/4 that has been picked pretty clean. 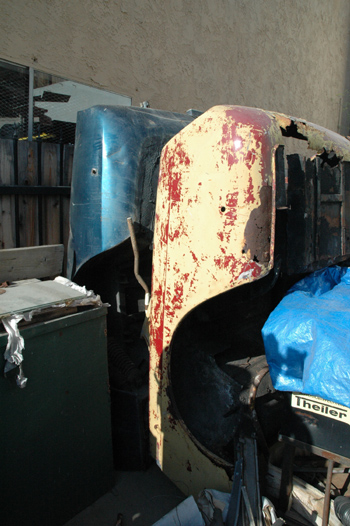 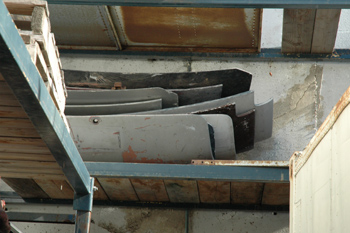 In the distance, I spotted trunk lids to 330s and GTEs. 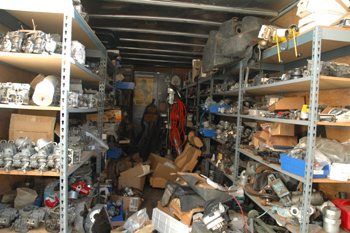 Inside a steel sea container, were all the more valuable parts like carburetors, and intakes. 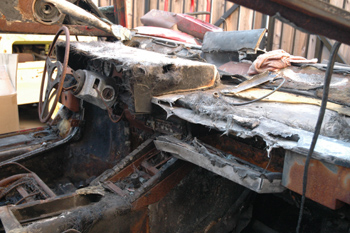 Deviating from Ferrari parts, there was this burned out Lamborghini Countach. The story was this was an East Coast car that was stolen, and chased by the police. Eventually, the thief crashed the car, the car caught fire, and burned to the ground. I think the driver passengers survived, but not the same can be said for the car. 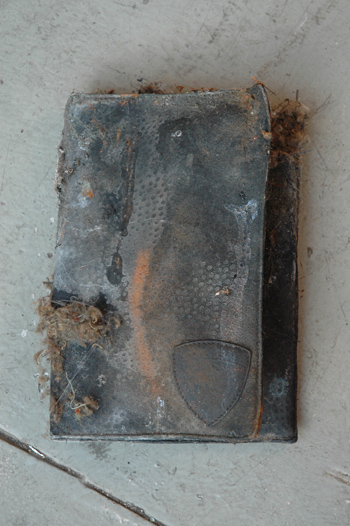 Pete Sweeny helped store this car for Tom before it was shipped to California, and remembered seeing the owners manual was still in the glove box. When he looked again, it was still there! It’s a little water damaged, but we joked about listing it on E-bay. 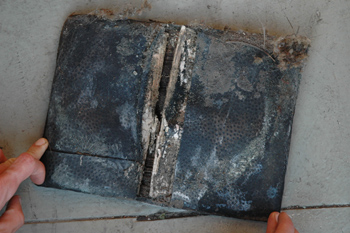 You can see all the original documents are still inside! 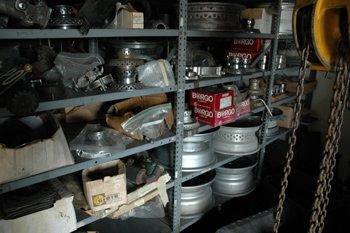 Going back inside, we found more shelves of parts. Here were some unlaced wire wheels and spindles. 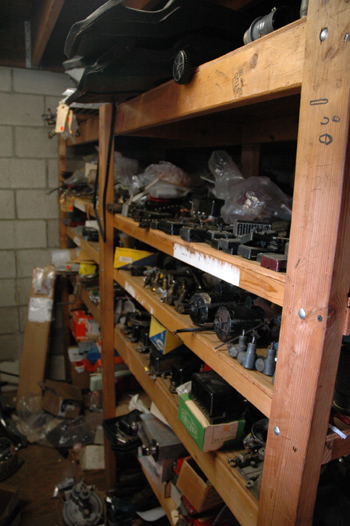 Upstairs was even more parts. A lot of electrical parts were found on these shelves. Fuse panels, blower motors, and radios lived in this aisle. 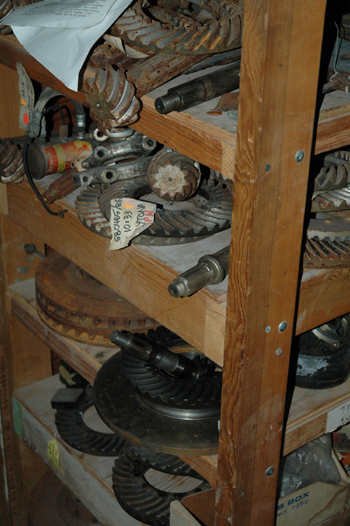 Need a Ferrari Ring and Pinion? 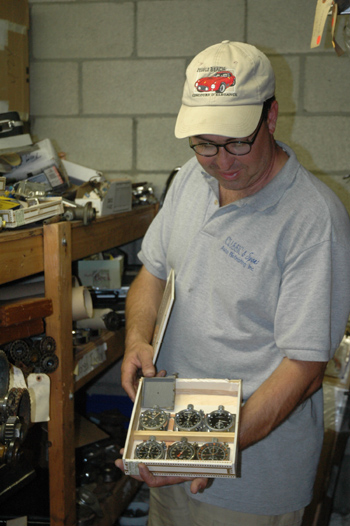 Here were a box of Stop Watches Tom was particularly proud of. They probably came out of a long ago dismantled race Ferrari. 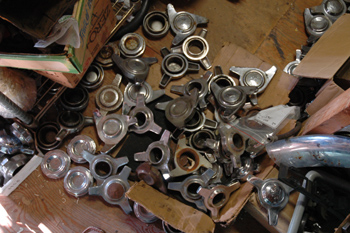 If you needed knock offs, I’m sure you could find one that would work in this pile! 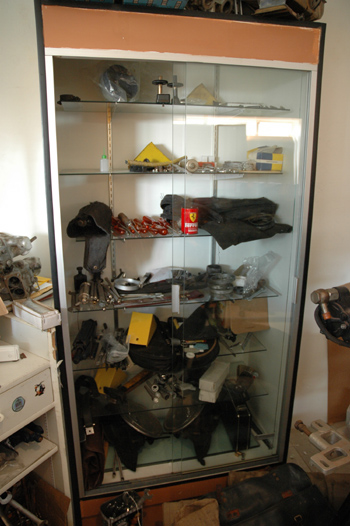 In the display cases were even more parts that Tom kept for safe keeping.

In all of this, there didn’t seem to be any rhyme or reason to the organization. Only Tom seemed to know where everything was. It was such an overwhelming collection that I was starting to get bleary eyed, but we still had one more stop to make! Stay tuned!