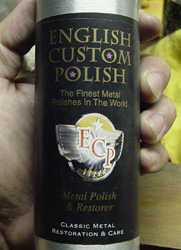 As I’m getting closer to finishing the grill (at least with certain pieces), I wanted to try out some different polishes. The first one that arrived was one called English Custom Polish. It was about 14 bucks, and is a liquid. It’s hard to figure out what is salesmanship, or true facts, but I figured I would give it a try. The results were pretty nice, but that was only after I got the aluminum pretty smooth with all the power buffing. 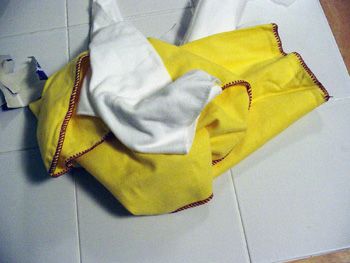 I also wanted to try some different cloths while I was at it, so I picked up some flannel (yellow), and cotton (white), cloths from my local Autozone. So far, I like the white cotton better, but I have to admit, I did not wash these cloths first, as recommended by the manufacturer, but the white cotton cloth left very few fine scratches in the soft aluminum. When I say scratches, I don’t mean gouges, but rather light lines that would only be visible to someone WHO HAS BEEN STARING AT ALUMINUM FOR THE PAST FOUR MONTHS! Sorry about that outburst, but I think it’s the aluminum dust. 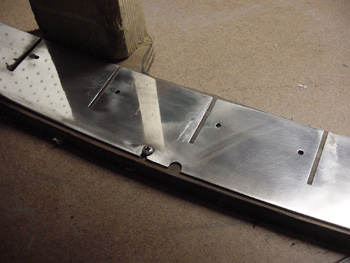 The left side of this picture shows the final buff on the grille shell with the metal polish, while the right side shows just the final buffing with the power buffer with no polish. The metal polish really finishes off the aluminum. We’ll see how the other polish stands up when I get it. 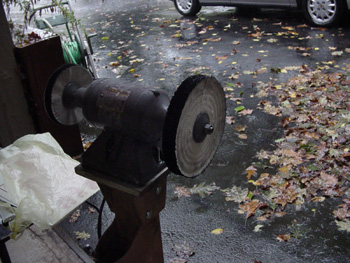 Work continues with the long horizontal pieces that still need to be buffed on the buffing stand. I took a chance and ordered an 8 inch double thick buffing wheel for my buffer when it normally takes a 6 inch wheel. It may be at the limit of my 1/3 hp buffer, as the added weight is causing some vibration on the motor. I’m hoping to make do with what I’ve got for these last four pieces as buying a larger motor seems like a waste when I’m so close to finishing this project, so I may have to buy a 6 inch wheel to save my buffer! 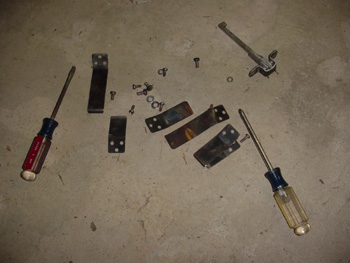 In the evening, after getting covered in buffing compound, I decided to tackle a job that has been bothering me for months. The hood on the Ferrari never seemed to close well, and has rubbed some paint off in one area. Someone from the Internet once explained the best way to align doors or hoods on a car was to first remove all the latches and hardware that could get in the way. Once the door or hood was aligned with the opening, then address the way it latched to the striker. I took this advice and removed all the hardware associated with the hood. This included the latch, the safety catch, and the springs that popped the hood up. I then rigged something that would get the hood open once it fell flush with the body. Within 10 minutes, I had the hood lined up perfectly with it’s opening. It took a little care shifting the hood by myself, but I managed to get things moved and tightened in place. Once I got the hood lined up, I worked with the latch and soon had everything working smoothly. Now my hood closes with a nice easy click, on the first try!

I spent the rest of the evening cleaning out the interior of the car to ready her for her debut in two weeks at the Tomyang.net party. Although the grille will probably not be done in time, I want to make sure the car shows well to all those who will see it in person for the first time. I keep having these horrible thoughts that something will happen, and I won’t be able to bring it to Michael’s house, but I’ve already decided that I’ll have it towed there if I have to, but it’s got to make a showing! Hope to see you there!