Stories Behind the Party

Even several days after the tomyang.net party, I’m still thinking about some of the things that happened. I’ve finally stopped calling Michael Greenspan to thank him for hosting it at his house because now it’s becoming annoying, but I wanted to tell you about a couple of stories that happened last Sunday. 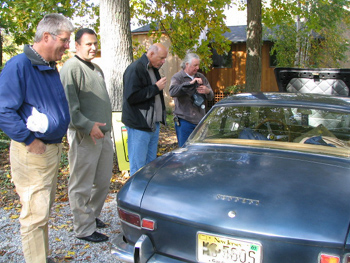 Art Suckewer drove his Series II 330 GT 2+2 up from the Princeton NJ area with his wife Ellen. Art is proud to call his car a “driver,” and uses it as often as he can. The paint is worn and crazed in some places, and the interior is original showing good patina in the leather. I describe the car as having the character of a well worn leather jacket.

When Art arrived, he was very generous in offering rides and drives in his car. Sam Hallowell took a drive so he could compare it to his Series II, but I was too busy mingling to get one in. I was speaking to Tom Wilson about his GTE while Art was giving rides when I realized that Tom had never driven a V-12 Ferrari before, even though he is restoring one in his garage! When Art got back, I immediately put Tom in line for a drive. How could Tom pass up a chance to experience what to expect after all the hard work he’ll put into restoring his GTE? I couldn’t think of a better motivator. Needless to say, when they returned, Tom Wilson was grinning from ear to ear!

Towards the end of the day, as people got ready to leave. Art needed to get some gas, especially after all those rides. Yale and I looked outside, and realized Michael Greenspan’s son, Josh was driving Art’s Ferrari! Josh’s parents were pretty surprised because Josh had not yet gotten a chance to drive his father’s car. According to Michael, Josh’s clutch technique was not worth risking the premature replacement of a Ferrari clutch, but Art seemed confident enough to let him drive his 330 to the gas station. They made it back without a hitch, and I think now it’s going to be even harder for Michael to keep Josh away from his 330 America!

Thanks Art, for being so generous with your car. It made some people very happy that day. 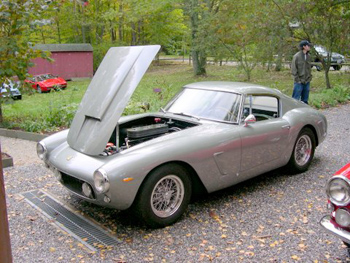 Speaking of rides, I mentioned I got a ride in Jim Wickstead’s 250 SWB. I missed the first chance to drive it several months ago, and I couldn’t pass up on the opportunity again. I had spent 2-1/2 hours getting to Michael’s house in my 330 America, so it was a real good time to compare the feel of two similar, and yet different cars. 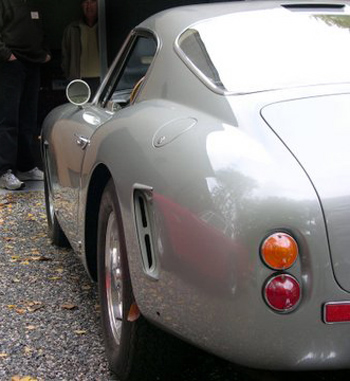 The 250 SWB is considered one of the desirable cars ever made. It was built at a time when engineering and design came together perfectly to form a car near perfection. Ferrari designed a powerful and reliable engine, and fitted it to a balanced chassis that was light and easy to drive. Pininfarina designed a beautiful shape that had a front of masculine aggressiveness balanced with enough feminine beauty in the rear to make you blush! Experience one of these cars in person, and you will agree with most people, it is a car to behold.

Getting into the car, I had to try my best to forget all that I knew about what comes with a 250 SWB. I needed to forget its beauty, value, and historical significance so I could try to compare it to my more pedestrian 330 America. At first impression, I noticed my knees were still splayed like in my car, and the same large wood steering wheel was staring me in the face. The closely spaced pedals were familiar as well, but I had my narrow shoes on for Ferrari driving. As I pulled out of the driveway, however, I began to notice the differences. It seemed that all the interior dimensions that were minor annoyances in my car were gone in the SWB. The windshield distance from the 12 0’clock position of the steering wheel was a little farther, the belt line of the doors were lower so the outward vision was better, and the loss of 700 pounds from it’s overall weight were all improvements over my car.

I did not get the car into 4th gear, but while tooling around the back roads in CT, I found the car very nimble. The weight difference between my car and Jim’s was very obvious, even with my larger engine. I don’t know if I could tell the difference between a SWB (short Wheel Base), or a LWB (Long Wheel Base) car, but but I can certainly tell you I felt how easy it was to place the car into a corner with throttle and steering. In capable hands, one could do great things in this car! Thanks Jim for letting me experience something I will remember forever! 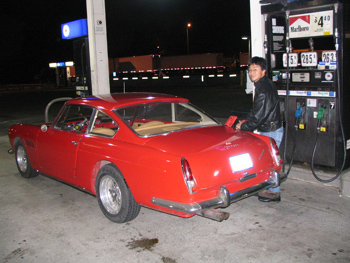 By the time I left Michael’s house it was getting dark, and by the time I stopped for some gas, it was completely dark. Art and I were headed in the same direction, so we followed each other down I-95. Unfortunately, the fuse to my driving lights blew out again. I failed to find the electrical short in the weeks leading up to this party, because the fuse refused blow. In fact, the car made it up all the way to Michael’s house with the parking lights on without a failure. During the pit stop, I replaced the blown fuse with another 16 amp fuse, and pushed on. 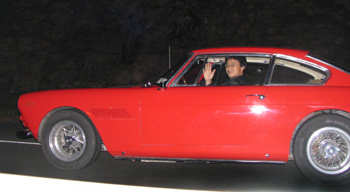 Art followed me for another hour, and confirmed that my tail lights were still working as we split off, so I crossed my fingers to make it home. As I pulled into the driveway, I noticed my parking lights were out again. Although I didn’t have parking lights, the brake and headlights were on another fuse, so I made it home without incident.

The almost 300 mile round trip has made my transmission whine even more. During the long hours of driving my Ferrari, I had plenty of time to figure out where it was coming from. The noise only changes in pitch when the speed of the car rises, and is not affected by what gear I’m in, or if the overdrive is engaged. This would lead me to suspect a bearing associated with the main output shaft of the transmission. 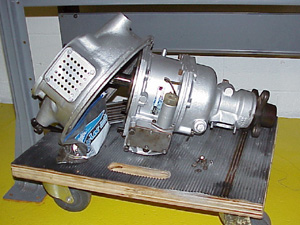 Four and a half years ago (!) François took my transmission apart because a synchronizer had gotten jammed in the transmission. I took the gear box apart and left the overdrive unit at my shop so François could rebuild the gear box. Although we changed all the seals, I never changed or checked the bearings in the tail of the transmission seen in this picture! I bet this is where the noise is coming from, and is at the top of my list of things to do when I return from my trip.

There is a slight chance I may be able to pull this unit off the back of the transmission without removing it from the car, but I will have to take a look when I get back from my trip.