As I am in the midst of preparing for my trip abroad, I have not had much time to write a post, but I’ve been sent a couple of interesting e-mails. The first one was from Parker Hall of Kilimanjaro Designs. If you don’t know Parker, he has a great catalog for Vintage Ferraris selling all the little bits and pieces necessary for detailing. His most recent project is trying to make sense of the Valve Stem Retainers found on our Borrani wire wheels. The hole for the valve stem is larger than the valve stem, so these pieces came with the original wheels to make up the differences. Parker has been collecting as much information on this topic so a more accurate reproduction can be made. Here’s what Parker has found so far: 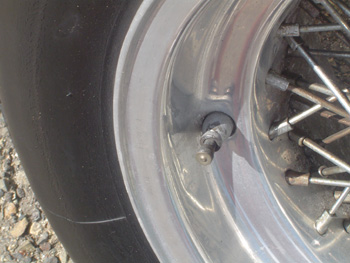 Series II 330
Here is a summary of the information that I have been able to assemble on the inner tube nipple sleeves. Thank you all for your help and the samples that you have been so kind to send to me. I will return the samples next week. It would be great if you could bring all of them to the meeting at the Cavallino show. 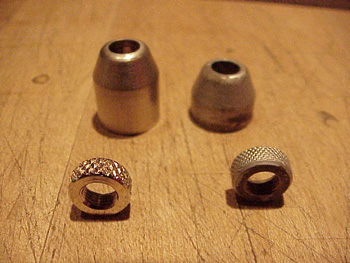 A.      The Earliest one is from a series 2 Cab. #2703 which had Pirelli tires. It shows remnants of silver (Nickel?) plating on the threads but none left on the exterior. The overall length is 0.424�. This one is fluted with a flute spacing of 30 per inch. There are two other ones with fluting from unidentified cars.

B.      The other three that I have all have a very fine female knurl with a spacing of 40 tips per inch. These are all Nickel plated and one of them, from a GTE, has �made in Italy� stamped in the area below the knurling. 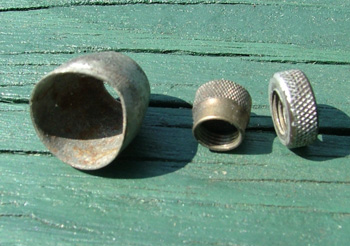 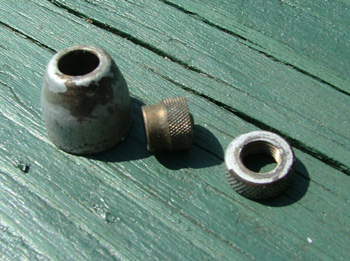 A.      The nine pieces that I have are all spun from 0.030� steel. He hole size is 0.327�, the O.D. at the small end is 0.438�, the vertical length of the slope is 0.365� and the O.D. is 0.690�. I have one sleeve from the Cab 2 #2703 which has about 20% of the plating and I was given a �virgin� piece from a GTE that has 100% of the plating remaining. This plating was judged to be Tin by the plating shop designer/contractor/ builder/ operator. I think that this configuration was correct through the last of the GTE series. Kerry Chesbro has sent photos of the original pieces from the 330 2+2 #8855 and the sleeves are spun from Aluminum. Similarly Paul Russell has sent photos of original components from a 365 GTS that also has the sleeves made of aluminum. The Harrah 365 2+2 # 12333 has a steel sleeve which has not been plated. The sleeve, nut and cap have all been painted. These pieces are on a polished aluminum wire wheel that has never been out of the trunk so it is very likely that they were originally supplied to Ferrari with all three pieces painted.  All of the sleeves have been trimmed to fit the rim. The longest side is 0.402� and they all look to be trimmed with the same pattern and very close to the same size. 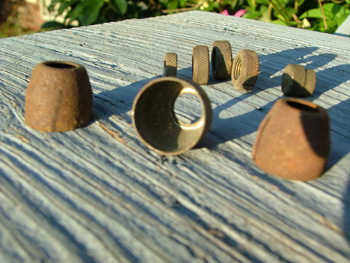 The three good early sleeves that I have are plated with Tin. The caps are all plated with a dull Nickel. The real question is what was done with the sleeve retaining nuts. All of them are made of brass. None of them appears to have any plating�but (here’s the kicker) if you look at the knurling with a 30 power microscope you will see remnants of plating in all the cavities on both the female and male knurling. The plating expert has said that this is �barrel plated nickel� in which the pieces are given a very quick, cheap plating which would adhere to the exterior surfaces and would not show up on the threads of flat surfaces. It seems logical (on a Ferrari?) that all three pieces would be plated. It also seems logical that the spun pieces would be supplied to the prime vendor (whoever sold all three pieces to Ferrari) by a company who specialized in metal spinning and that they would use something cheap and quick�tin�to keep the pieces from rusting while in someone’s inventory. Again, logically the machine shop type of operation that made the cap and retaining nut could easily have used a different finish and it would make sense that the two pieces would be plated with the same material, but in different type plating operations. 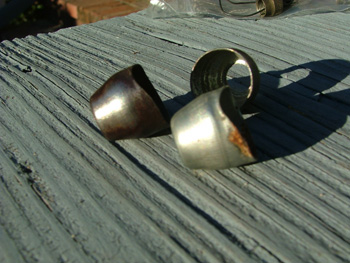 The tube nipple sleeves that I first saw were on the �very original� Cab2 #2703. When I took off the �original� Pirelli Cinturatos and replaced them with Michelin tires and tubes the sleeves were too �small� (I.D. of the hole) to fit on the larger O.D. Michelin innertube nipples. Luckily I saved the old bits. I have also seen them on several �original� Pirelli shod GTE�s. The 1,700 mile Lusso with Dunlop tires did not have the sleeves, nor did the 1,300 mile Gold Daytona (Michelin tires). The original thought that these pieces were supplied by Pirelli has not been confirmed by Pirelli and Chuck Betz says that they were on a lot of the older cars which had Continental or Englebert or other brand tires. It has also been theorized that the sleeve assembly was simply an aftermarket dress up piece. I doubt this concept as there are too many cars with the same pieces. 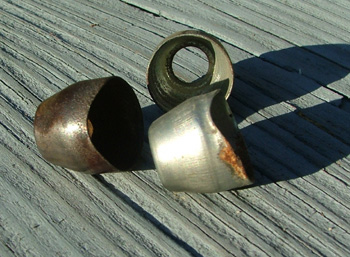 
1. The tube nipple sleeve, retaining nut and cap were supplied as original equipment on the 250 and later cars, including the 365�s.


2 .Earlier cars and later cars, such as the Daytona�s, are still a question.


3. These sleeves were on the cars with Pirelli tires. Other tire manufacturers are thought to be included but not yet confirmed.


7. All of the caps were Nickel plated and were made with either fluting or a very fine knurling.


8. The retaining nuts were made with a very fine female or male knurl and were plated with a very light coat of Nickel.


If you have any information to add, contact Parker or me, and we’ll try to add them to this article. I plan to make this a permanent addition to the “Tips” section of this website.

Another interesting E-mail was from a Fellow Ferrari Owner in Argentina. Gerry owns a GTE, and is currently working on restoring his fuel system. His gas tank was too rusty to repair, so he decided to have one made from scratch. I would imagine it is much harder to source used Ferrari parts in Argentina than here in the U.S., so he sent me pictures of the results. 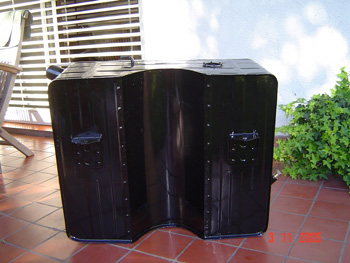 From these pictures, and Gerry’s description, I am impressed with the work. They used many of the salvageable fittings from the old tank to make the new one, and even saved the original maker’s seal on top! 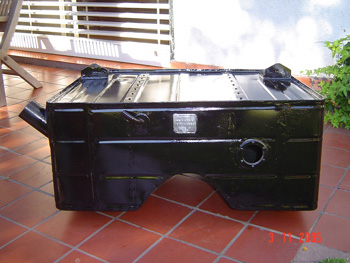 How much did all this cost? $215 dollars! I don’t think I could have bought a used one from Shaughnessy for that much! Thanks for the pictures, Gerry.