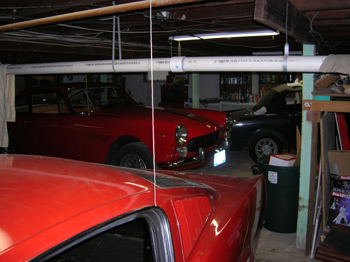 We had friends over to our house this weekend, and I took advantage of the help to move some cars around for storage. I moved the Ferrari further back into my garage for safe keeping, and to get it in a good position to pull her transmission out when I return next Summer. The Mustang had not been started in over a year, but was soon running without much drama. The only casualty was the few brain cells Rich and I lost from the unburned hydrocarbons in the air. 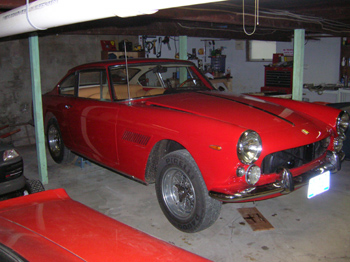 I got the Ferrari up on jack stands to relieve the pressure on the wheel bearings. The rear of the car is supported from the axle tubes, so the suspension was under load, but it was hard to find a good place to support the front of the car where the suspension would be loaded without putting the pressure on the wheel bearings. Keeping the car’s weight on the suspension helps two things, the shock rods may rust less, and the springs won’t make the car ride high when the car is set back down. Since my garage will have humidity control, and I know it has sat for longer periods of time unloaded, I decided not to worry about it and let the front wheels dangle.

Next week, right before I leave for Australia, I hope to squirt some oil down each cylinder, and put the Ferrari down for her winter hibernation.

This will probably be my last post I make from the U.S.. I will be in Sydney on the 12th of December, and hope to post something shortly after my arrival. Thanks to all that have contacted me, and I hope to see you all in your respective cities. Once I get to Australia, I will get a phone, and we’ll be able to get in touch and meet. Until then, see you all in Australia!