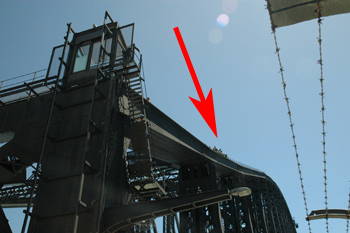 There is a bridge walk for the Sydney Harbour Bridge that is reserved for the brave. It takes the adventuresome up along the span of the bridge usually reserved for inspectors and bridge painters. They outfit you with jumpsuits and tethers so you won’t accidentally fall from these heights. The view and experience is supposed to be compared to none other, but we did not do this climb. It’s not for fear that we did not sign up, but it was because we have a two-year-old in tow, and children under 12 are not allowed on this climb. We did however, choose to cross the Sydney Harbour Bridge via the normal span, and the views were just as breathtaking, without the feeling of peril. 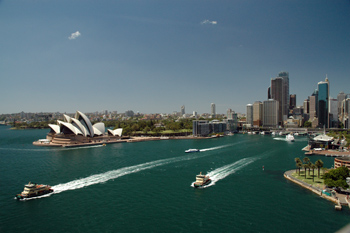 The hardest part of the crossing was carrying our stroller up the several flights of stairs that led to the bridge. Since arriving in Sydney, we bought one of those three wheeler all terrain strollers to take on Australia, but carrying it up and down stairs is much harder when you compare it to our usual umbrella stroller we used in NYC. 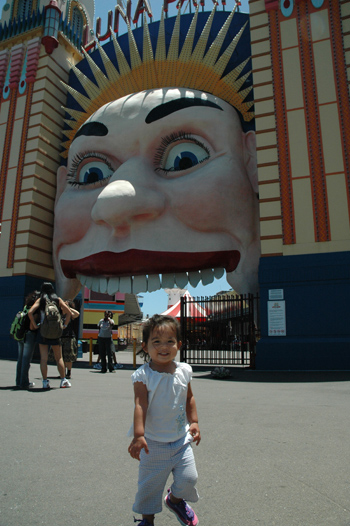 On the North side of the city, we headed to Luna Park, an old amusement park at the base of the bridge that only recently opened again after a long history of survival. Built from the model of New York’s Coney Island Amusement Park, it was nice to be reminded of home. Ellie had a blast riding the kiddie rides, and burning off some energy. 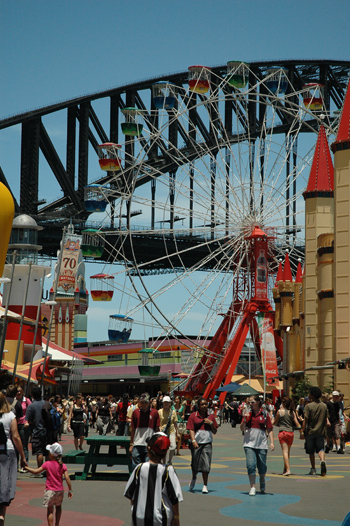 The park is located at the foot of the Sydney Harbour Bridge, and is a nice diversion from the sights of the city. 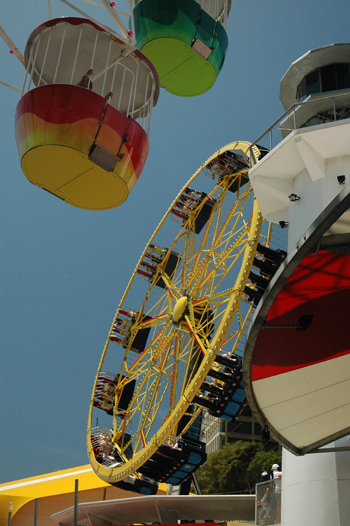 My wife and I loved all the bright colors and shapes to photograph. Being at an amusement park a week before Christmas is still a little alien to us, but I guess I can bear the sunny skies and warm weather! 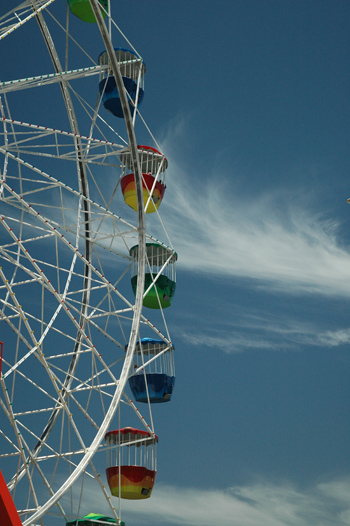 Right before we left, Ellie and I took a requisite ride on the ferris wheel, while my wife took pictures.

After over a week in Sydney, we have only had one bad meal! The food in this town is fantastic. Considering the culture is descended from the British, the Australians have done quite well with their cuisine. The U.K. has made great strides as well in the last 15 years, but it seems Australians figured it out long ago! Even sandwiches from any little shop are tasty, flavored with sliced beets, or sweet onions. The trend seems to use Turkish bread, but it goes well with any kind of filling. I’m going to let my wife describe some of the food on her website since she is far better at it than I, but I had to mention how good the food has been in Sydney. We’ll have to see if this quality extends into the rest of the country.