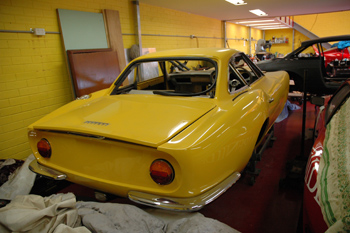 As I walked around David Levy’s shop, I noticed a shape of a car that looked vaguely familiar, and yet it was something I had never seen before. It had many Ferrari, Scaglietti, and Pininfarina design cues, but it was not recognizable as a particular model. When I asked David what it was, he told me it was a pet project that he has been working on “all too many years.”

The car sits on a 400/365 chassis that has been shortened by Levy. He completely removed the old body, and began literally with a blank sheet of paper. He drew his car on bits of paper, and fabricated sections in steel from scratch. He let his eye and hand form the shape of the car following lines originally sketched by the Italian design houses in the 60s. Everything on this car has been reworked or formed by Levy, even the bumpers. When I asked if he used pneumatic tools for some of the forming, he laughed and told me EVERYTHING was formed using only hand tools and a torch! I did not know whether to be sympathetic or impressed with the amount of hours he has spent on this car! 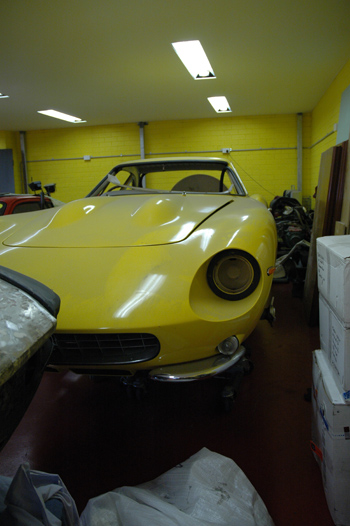 The nose of this car has a narrowed 330 2+2 grille, and a shape very similar to a short nose GTB. The head lights will use Plexiglas covers that were fabricated along with the stainless surrounds.  The two bulges in the hood similar to the single hood bulge found on early TRs tells another story of what will power this car. 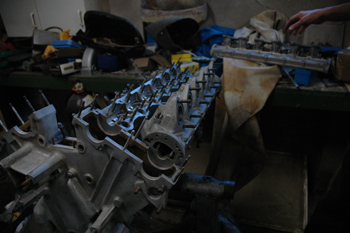 The engine in this car came from a GTC/4 or a GT/4  that has dual overhead cams and side draft DCOE Weber carbs. This configuration was used so these two models could have a low hood line, but created a very wide engine. Levy’s car could not afford the space for the carbs so an alternative was needed. 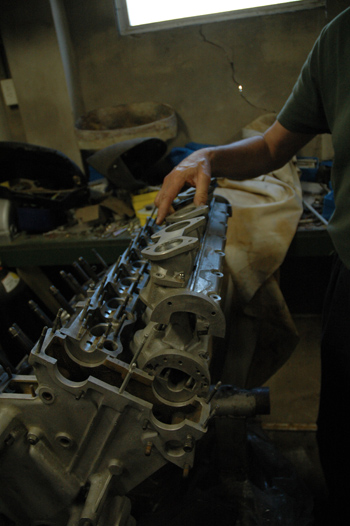 Levy created and cast a set of downdraft intake manifolds so fuel intake could come from above! The shape and castings look like they came from the factory, and to the casual observer would look like a Ferrari “one-off!” David plans to use fuel injection with a fuel rail and custom air cleaner, all to hide under those two hood bulges in the the bodywork. I only wish I could see this car running and driving on the street someday! Good luck David, and thanks for the tour! 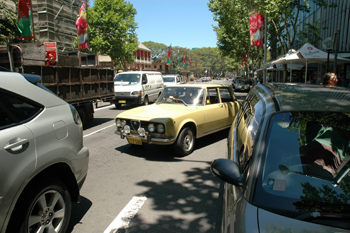 After a long morning, and a nice lunch in Cronulla, Adam dropped me off in Sydney to catch up with my wife and child. I should mention my ride was in Adam’s 1974 Alfa Romeo Berlina Sedan that he uses as a driver. It was comfortable and fun to see the area in vintage Italian iron. Thanks for the lift Adam, and I hope you see another 100K miles in that car!