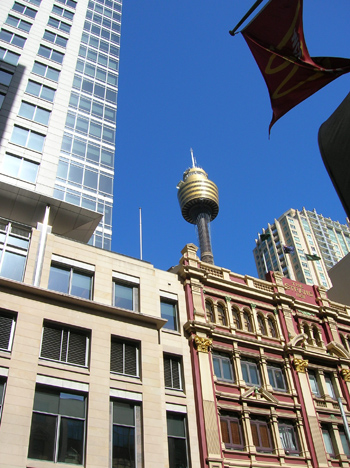 For Christmas Eve we decided to make reservations at Sydney Tower for dinner. It’s a Sydney landmark, built in the 70s, and opened in the early 80s, and rises over 300 meters above the center of the city. This multi-level observation tower has levels for sightseeing, and revolving restaurants. One level has a buffet style restaurant that we felt would be more suitable for our two-year-old, so up we went.

As we walked off the elevator I felt I stepped into a time warp! I don’t know if the other levels were decorated in the same fashion, but I’m sure the buffet level had not changed a bit since its original design from the 70s. I was surrounded by gold vinyl seats and red carpeting, and from the looks of it, I don’t think they meant for this look to be “retro.” 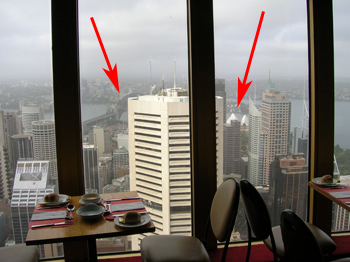 The buffet restaurant is known locally to be overpriced providing substandard food, and it did not fail at its reputation, but I felt the view would compensate for the meal. Ironically, as the revolving restaurant turned to face two of Sydney’s landmarks, I found them both to be obstructed! The two arrows point to the Harbour Bridge, and the Sydney Opera House, blocked by modern buildings that were erected after this tower was built.

After about an hour we had made a full revolution of our view, and headed back down to ground level. As negative as I sounded on this post, I actually had a good time. It was another experience worth remembering for our trip to Sydney!