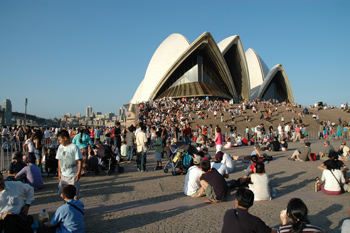 Despite all the warnings about how crowded it would be in Circular Quay, we decided to see the Sydney fireworks from the heart of the harbor. We arrived at the Opera House at about 6:00pm and the crowds had already begun to gather. We spread out a blanket and parked ourselves about 50 yards from the main steps of the Opera House. It would have been nice to sit on the steps but we soon realized the vantage point from the steps would not give us a view of the fireworks over the Harbour Bridge. 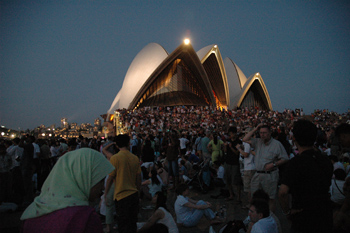 By 8:00pm, it was pretty crowded but not uncomfortable. Sydney actually hosts two fireworks displays, one at 9pm for families, and then the official one at 12 midnight. We were not sure if we would stay for the second show, it all depended on how well the baby fared through the first show. 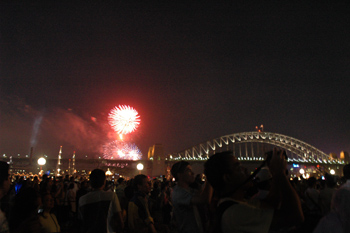 Although the early show was an abbreviated one compared to the big one at midnight, it was still spectacular. 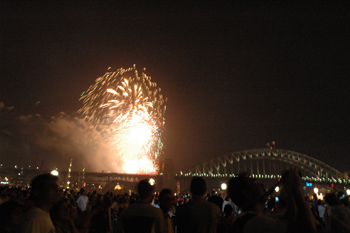 I tried my best to hand hold 1/3 second shots without any extra bracing so these are not the sharpest shots. 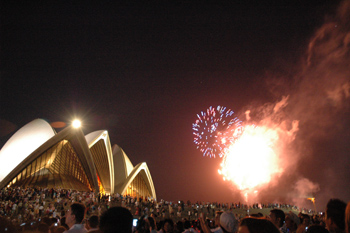 There were two sites shooting off fireworks, so from our vantage point we could see both sets. The Opera House shots came out a little better. Since I didn’t want to lug a tripod or mono pod for the duration of our trip, these came out all right without one. 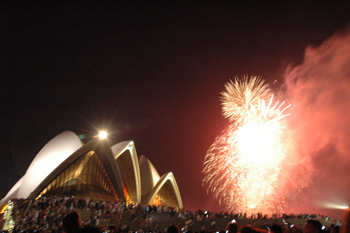 After the 9:00 pm show, we decided our baby would probably not make the 3 hour wait for the big show at midnight. The risk of being stuck in a mass exodus in the middle of the night with a cranky kid is not something I wanted to try, so we made our way out of the area. My small regret in leaving faded as we saw how many people were waiting to enter the area for the later show. The well organized Sydney police had blockaded the area, only allowing a safe amount of spectators into the harbor, but I could tell it was still going to be more crowded than the 9pm show.

As our four week stay in Sydney winds down this week, I’ve been impressed at how “child friendly” this town has been. The early fireworks is just one example; Sydneysiders know what it is like to have kids. There has also been an abundance of clean pubic toilets along with plenty of “changing stations” for diapers and nursing mothers. I really would like to thank Sydney for considering the needs of us parents and children.

…and then there are the flies! There are only a few places in the world where I have felt persistent flies like those we found in Sydney. I hope it doesn’t get worse as we leave the city but I’m beginning to suspect we’re in for trouble. On hiking trips or in the African Savannah have flies been desperate enough to risk landing close enough to try and suck the juice from my eye, but here in a civilized modern city, I’m faced with this kind of attack on a regular basis! I was soon introduced to the Australian Salute, which usually involves several swats in front of one’s face. They didn’t say anything about this in any guide book!