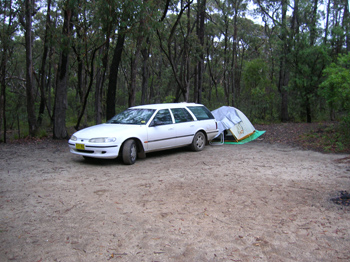 We stopped in Morton National Park in New South Wales on the way to Canberra (pronounced Cambra by the Aussies), the nation’s capital. The plan was to stay one night in the tent to see how our daughter would like it. This test would set the tone for the rest of our trip by deciding how far we could “rough it” with a two year old. Little did I know when I reserved the campsite a few days earlier that it was going to be wet and drizzling all day! We decided to camp anyway feeling that it would be in the worst conditions, and if we survived it, any other camping from now on could only be better!

I’m happy to announce that Ellie made it through the night without disaster. She was a little overly excited to be sleeping in a tent, so it wasn’t the most restful sleep for any of us, but I feel that it will only get better with familiarity.

The spiders seemed to be the only real concern. Before we left Leura, my friend Paul killed a Funnel Web Spider in his house! He explained that in the four years of living in Leura, he had never seen one in his house, but this one actually reared up and flashed its poisonous fangs at him before he managed to smash it to bits with something heavy. After telling us his story, he continued to describe other spiders we should be aware of, like the Redback, a spider similar to the Black Widow we have in the States. All this talk about spiders made even my wife a little Arachnophobic, so when she walked about the campsite, it always done with caution. You can imagine her fear when I pointed out a large spider crawling on the car shortly after we parked. It was about the size of a quarter, brown, and no fangs, so I figured it was probably just a “Huntsman,” a harmless local spider. The joke was on me the next morning, however, when the same spider found its way into the car, and dropped in front of me as I opened the door. 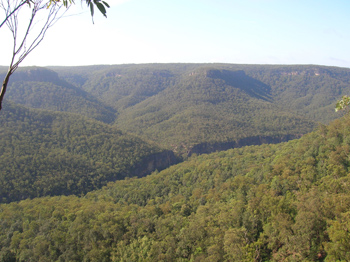 The next morning the sun came out, and we were able to see the views of the “Southern Table Lands” before packing up our camp and heading south towards Camberra.