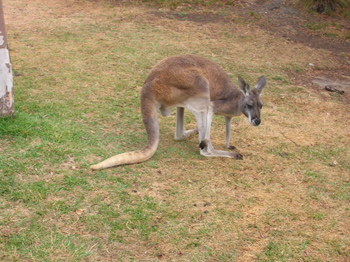 I forgot to mention we saw our first kangaroo in the wild! Although this one pictured was in a zoo, we saw ours in Morton National Park. We went for a walk down a dirt road in the evening before turning in for the night, and saw something standing in the middle of the road. As it hunched over to pivot on its two hind legs, the kangaroo took one look at us and hopped off into the woods. We were left speechless as we realized what it was. I’m sure I’ll see many more during my stay in Australia, but my first sighting is worth remembering! 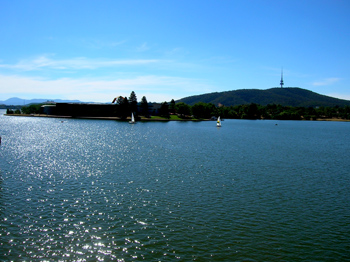 Canberra is about equidistant from Melbourne and Sydney and was a city that was designed from scratch in 1920s. It felt like Washington DC, with its wide avenues and parks, only there were no people! Cold and impersonal have been the words I’ve heard used to describe this city and trying to walk a little of it on a sunny Saturday afternoon, I also didn’t find it too inviting. The scale seems to be all wrong. The use of space where large parks and boulevards spreads all the monuments and buildings too far apart, making the human scale seem small and out of touch. 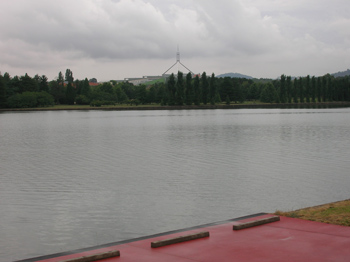 I believe the design was inspired by the Australian Outback, and its use of wide open spaces was to embrace the countryside. The problem I had with this idea, was it made visiting this city difficult. 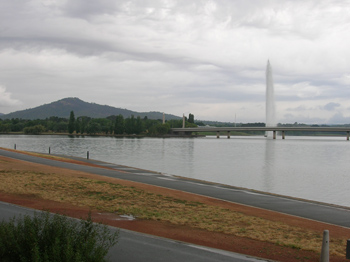 We walked for over a mile along a main avenue with no shade and protection from the passing traffic only to find a park without paths. If we wanted to walk down to the water’s edge by the reservoir, it would have taken us too far away from the main thoroughfare to put us back to where we wanted to go. We soon gave up walking and returned to our hotel that was supposed to be near the center of town.

The next outing took us to the Science Museum, Questicon, and this time we drove. On the way there, we drove around the capital trying to get a feel for the city. With a scale that requires visitors to drive to all the venues, Canberra makes you see the city via parking lots and roadways. 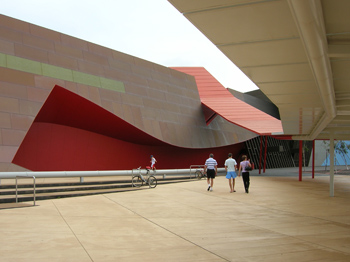 My next stop was the Australian Museum, which is a post modern monstrosity of bright colors and geometric shapes. Modern construction has allowed architects to build these amazing structures that seem to defy physics. 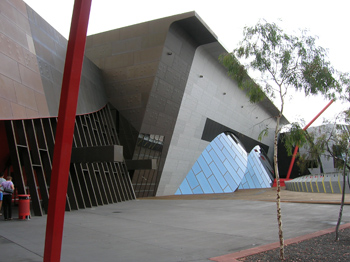 Visually, it was interesting, but not really pleasing as a building. There were many interesting shapes, and spaces, but they seemed to compete with each other for attention. The entrance was not apparent, so there was no feeling of welcome to the building, and walkways into the courtyard were just as confusing. 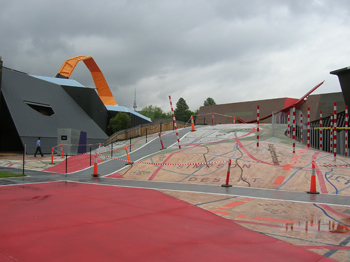 I found many tourists (including me) wandering about looking for a way back into the building! 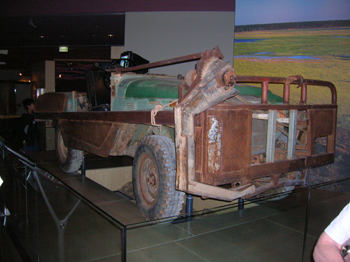 Inside, the interior space was huge, and the galleries were set on the ends of the building. The exhibits were fantastic showing all aspects of Australian life. I found this display showing the inventiveness of the outback. Wild water buffalo were caught with this truck in Northern Australia for meat in the 70s and 80s. It replaced men on horseback when this rig was welded to the side of a Toyota 4X4. They tried Jeeps, but they proved to be too small. Larger trucks weren’t maneuverable enough, but the Toyota was perfect. Here’s a movie that shows the action (click on the picture); 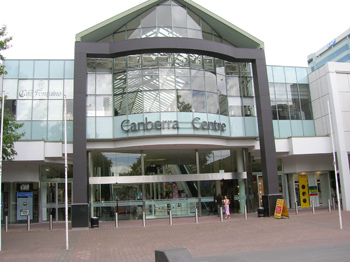 There was a big shopping area near the hotel, and we spent some time there getting supplies for the rest of our trip. I also got the windows tinted on the wagon while I was in Canberra. Since we would be spending some time driving in some pretty hot areas, I figured it would be worth the $225 USD investment. Having darker windows also helps hid some of stuff when we keep in in the open back of the station wagon. It took them 6 hours to complete the job, and I was pretty happy with the results.