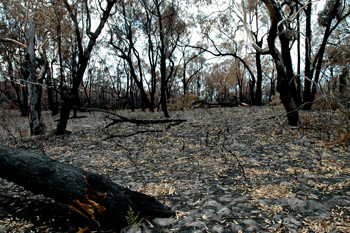 Somewhere between Wilson’s Promitory and Phillip Island on a desolate highway, we found a section of forest that had evidence of a past bush fire. To the north, bush fires raged and killed several people and destroyed many homes. Two bodies, an adult and child, were found burned beyond recognition after their car crashed into a tree from poor visibility, and were soon engulfed in the flames.

Australia gets very dry in summer, and warnings were posted all over the place reminding us of the fire hazard. Open fires in campsites were strictly prohibited in the whole state of Victoria. 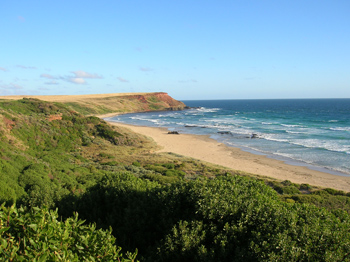 We arrived in Phillip Island to see the Penguin Parade, and found a beautiful retreat 90 minutes south of Melbourne. It was a little cold for a swim at the beach, but the wind blown cliffs were spectacular. 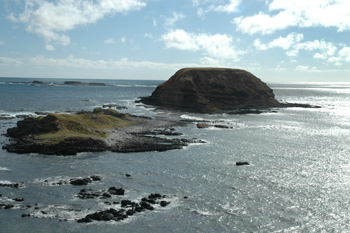 The furthest point west on the island is a rock called the Nobbies. Fur Seals and penguins can often be seen from this point. 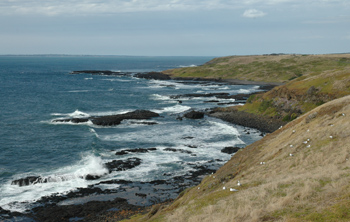 The western end of the island is also where a Fairy Penguin colony is found. These small species of penguins have roosted on this island for thousands of years. 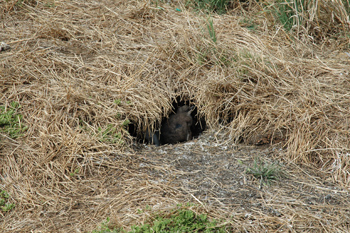 The nests are scattered all along the shore where the chicks wait patiently for their parents to return from feeding in the ocean all day. The penguins return en mass from the sea after sunset when they are safer from predators. 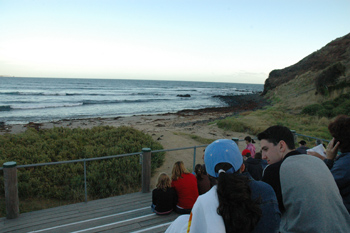 We weren’t allowed to take pictures of the penguins actually coming ashore, but I took this picture of the viewing area. The park service set up several areas where a boardwalk and bleachers allow for visitors to sit and watch. Although it felt a little silly to sit on these viewing stands to watch a natural occurrence, it helped keep us tourists from destroying the area from foot traffic.

Once it got dark, at about 9pm, the penguins started to arrive. The first group of about 20 waddled onto shore, and cautiously walked past our viewing stand. They seemed used to being watched, and calmly walked by. Waves of penguins continued to come ashore and more found their way back to their respective nests. We bought tickets to the premium viewing site which allowed for a very close vantage point, but all the viewing stands allowed the visitors to walk along the boardwalk to watch the hundreds of penguins make their way home for the night.